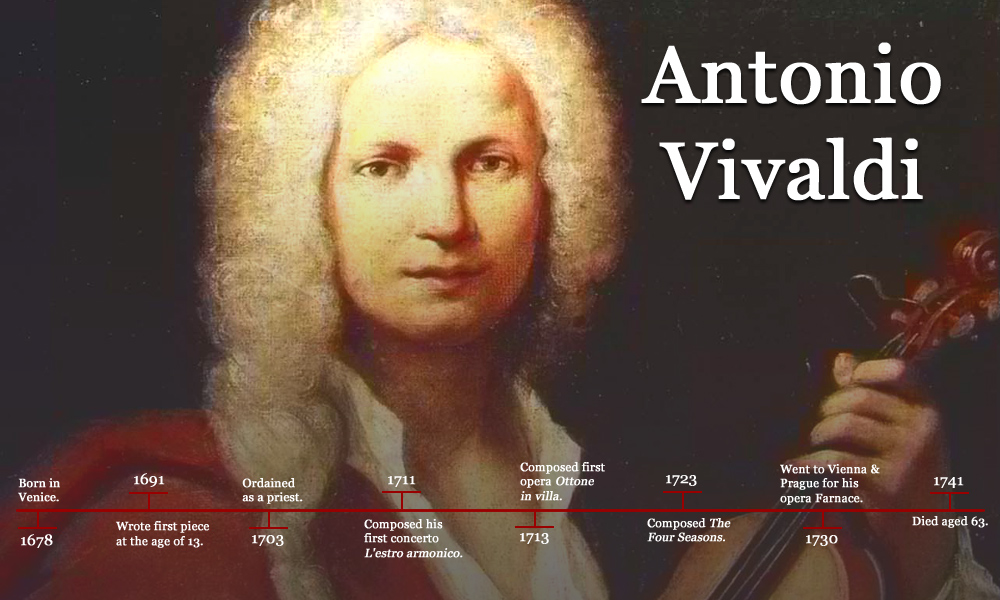 He made that comment in 1935 after critics derided him for writing works and passing them off as oeuvres from composers like Pugnani and Tartini.  Of course, the critics he angered were originally impressed by his compositions.

Another composer's reputation he co-opted was that of Antonio Vivaldi.  At the time, middle of the 20th century's fourth decade, Vivaldi was a virtual unknown.

Even his most seminal work, Le quattro stagioni, better known as The Four Seasons, was lost to the annals of time.

Pincherle began his Vivaldi scholarship in 1913.  His biography of the composer came out after World War II and is still considered an important and significant work.

From there, musicians like Arturo Toscanini, Olga Rudge, Louis Kaufman, and Alfredo Casella took over the role spreading the Italian composer's genius.  Vivaldi's music did the rest.

Nowadays, Vivaldi is regarded as one of the greatest baroque composers of all-time.

Had it not been for the names listed above, Vivaldi's music may still be buried.  That's a tragedy difficult to comprehend especially when one considers how popular and successful he was during his lifetime. 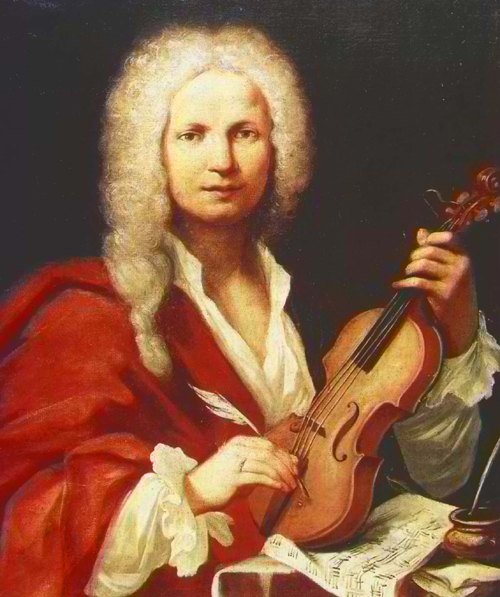 Antonio Lucio Vivaldi was born in Venice on March 4, 1678.  Unusual for his era, he was baptized by his midwife shortly after birth.

The reason for a hasty baptism is unknown.  Historians have put forth two theories.

One, he was in poor health and there were concerns he was going to die.

Two, earlier in the day Venice suffered an earthquake.  The quick baptism may have been a response to the Earth moving.

The first theory seems the most likely.  Even though Vivaldi lived to be 63, his health was poor.

He suffered from what was described as tightness in the chest.

Modern doctors believe he had asthma.

Vivaldi was the oldest of nine children.  His father was a professional violinist, founder of a musicians' union, and probably a composer.

Dad taught his son how to play the violin.  Vivaldi was sort of a child prodigy and a virtuoso on the instrument.

The second theory about his rapid baptism may have been the reason behind his mother dedicating him to the seminary.  Vivaldi was ordained in 1703 although he stopped performing priestly duties three years later.

Many believe he abandoned his priestly duties because of poor health.  Others theorize that he stopped citing mass because it interfered with his composing.  Regardless of the reason, he never left the priesthood.

His scarlet mane earned him the nickname “The Red Priest.”  That's translated from the Italian, il Prete Rosso.

Also in 1703, Vivaldi landed the job of “master of violin” at the Devout Hospital of Mercy in his hometown of Venice.  That hospital, known in Italian as the Ospedale della Pieta, was an orphanage.

The hospital was his employer until 1715 and then again from 1723 to 1740.  While working there, he composed many works.  Some of his compositions were for, and performed by, the young girls living there.

Vivaldi's first work was published in 1705.  During his lifetime, The Red Priest wrote more than 500 concertos, 90 sonatas, more than 50 operas, four oratories, 40 cantatas, and dozens of others works.

Clearly, Vivaldi was a prolific composer.  During a ten-year period beginning in 1723, he penned 140 concerti and those were just for the orphanage.

It should be said that calling the Devout Hospital of Mercy an orphanage is misleading.

The venue took care of young girls whose fathers were noblemen and whose mothers were their mistresses.

You'll be hard pressed to find a composer of Vivaldi's era with more published works.  Despite that, he stopped publishing concertos in the 1730s. 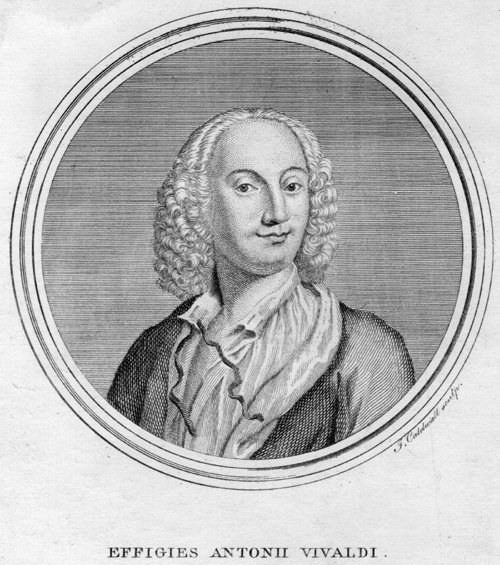 Instead of writing concertos for publications, he wrote them for the well-to-do.  They commissioned Vivaldi's creative talents to show off to friends and/or add to their collection.

It sounds elitist, but the business model was more profitable for Vivaldi than the mass marketing route.

The downside was prosperity.

Many of these works have been lost to the dustbin of history or are still hidden in the timeworn libraries of Europe's wealthy.

Every so often new Vivaldi compositions appear.  For example, one of his operas was discovered in 2006.

His most popular composition is The Four Seasons.  The work, published in 1725, is comprised of four violin concerti, and as the name implies, expresses the passing of spring, summer, autumn, and winter.

The musical year begins with “Spring.”  That concerto is the only one of the four that's not original to the suite.  To write that, Vivaldi used motifs from his opera Il Giustino.

An aspect of Vivaldi's Four Seasons that causal fans may not know is the work has words.

No, The Four Seasons doesn't have lyrics, but sonnets.  These sonnets, possibly written by Vivaldi, explain the spirit of each season and intended to be recited before the individual concerti.

The Four Seasons is widely considered as one of the paramount examples of early “program music.” Program music is a piece of music with a narrative element.

The Four Seasons are part of a larger 12-part work titled The Contest between Harmony and Invention.

Vivaldi had many admirers during his day and some detractors.  His radical approach to opera irked traditional musicians.

One such critic denounced Vivaldi and his progressive operas in a pamphlet (although the pamphlet didn't mention the composer by name).

Vivaldi's opera, Arsilda, regina di Ponto, was briefly banned because the heroin falls in love with a man that's actually a woman in disguise.  It took a year of persuasion, but Vivaldi convinced the censors to back off.

He produced the work the following year and it was well received.

Singer Anna Tessieri Girò was Vivaldi's favorite student.  Her and her sister frequently traveled with the composer.

Due to the time they spent together, rumors swirled that they were more than teacher and student.  Researchers have failed to produce any evidence to support this notion.

Vivaldi refuted such claims in a letter to his aristocratic patron.

Throughout his life, Vivaldi traveled all over Europe.  In 1720s, he spent considerable time in Rome and Mantua.  In the 1730s, he visited Vienna and Prague.  He returned to Vienna the following decade.

During many of his travels, Vivaldi promoted and produced operas, many of which he wrote himself.

While he was successful in getting operas to opening night, he was not very good at keeping them running.

There's a recurring theme that appears in the lives of classical composer from Vivaldi's era.  That is, they end their lives in the throes of severe financial hardship.
Obviously, 18th century composers didn't have good pension plans.
Vivaldi's money troubles were compounded by the death of Emperor Charles VI.  When Chuck died, so did Vivaldi's steady paycheck.
Vivaldi expired on July 28, 1741 of an internal infection.

The anchor of Vivaldi's legacy will always be The Four Seasons.  His other major contribution is his collection of concerti.  They are creative, vibrant, and infinitely inventive.
He had a penchant for composing for virtuosity and his three-movement structure became the standard of his day.
His melodies are enthralling while still formal and structured.  His rhythms and harmonies are challenging and accessible.
Perhaps the finest accolade he received was having some of his works arranged for keyboards by the great J.S. Bach.

At the beginning of this article, we hailed Vivaldi as one of the greatest Baroque composers of all-time.  Yet, what does “baroque” mean?

Baroque is a Portuguese word meaning “misshapen pearl.”  That sounds like an odd term to use to describe a period of music, but it made perfect sense to the 19th century critics who coined it.

Today, the Baroque period refers to Western music from 1600 to 1750.  Besides Vivaldi, other composers of the era include Bach, Handel, Purcell, Lully, Couperin, and Monteverdi.

One of the many innovations that occurred during the Baroque era was composing works in keys.  Improvisation was also an important element.

Baroque followed the Renaissance period and preceded the Classical era.