Shop for University of Georgia's Sanford Stadium tickets here, quickly and securely. All our tickets are 100% guaranteed. Our ticket prices for any of Sanford Stadium's events are competitive and we're committed to getting you into the best seats to enjoy the live show. Search through our large selection of tickets and locate and purchase your perfect Sanford Stadium seats for the event you want to attend.

Sanford Stadium is in Athens, Georgia on the campus of the University of Georgia.  It’s the home stadium of the university’s football team, the Georgia Bulldogs.

The Bulldogs play “Between the Hedges.”  The term is taken from the fact that the field is surrounded by privet hedges.

The hedges have been a part of the stadium since it opened in 1929.  The hedges were removed for the 1996 Summer Olympics (soccer) and replanted after the games.

The idea for the hedges came from a member of the UGA Athletic Department who saw roses at the Rose Bowl.  Since roses don’t do well in Athens’ clime, privet hedges were selected. 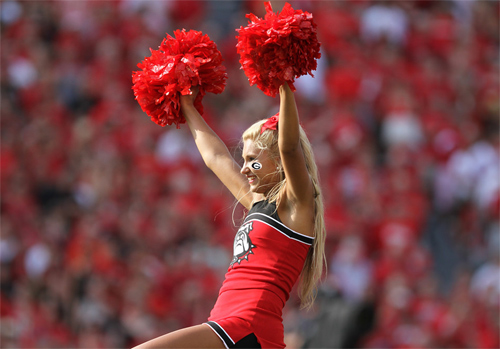 No one disputes Georgia was the first school to erect hedges (it’s been copied by several other stadiums), but many debate the exact type of privet hedges.

Officially, they are “English privet hedge" but many insist they are a Chinese privet, Ligustrum sinense.

Sanford Stadium is named after Dr. Steadman Vincent Sanford.  Sanford came to UGA in 1903 and eventually became the institution’s president.

Before Sanford Stadium was built, the Bulldogs played at Sanford Field.

That venue was too small to host the school’s annual contest versus in-state rival Georgia Tech.  The big game, which always drew huge crowds, was played in Atlanta at Georgia Tech’s home field.

In 1927, the Bulldogs’ perfect season came crashing down when they fell to Georgia Tech, 12-0.

Many UGA fans believed Georgia Tech watered down the field to purposely slow their running backs.

Whether or not that was true, the defeat caused the university to raise money and build a new stadium.

onstruction of the venue was mainly done by convicts. 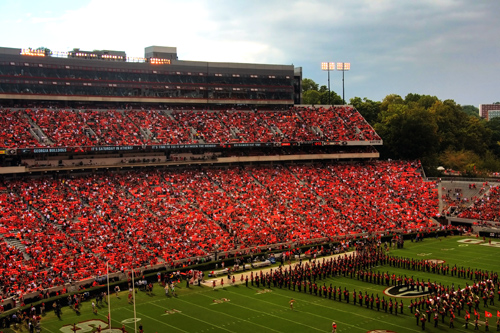 Over the years, Sanford Stadium has been renovated several times.

The venue now accommodates more than 92,000.

When those cute bulldogs that serve as the team’s mascots go to the big fire hydrant in the sky, they are buried in the stadium’s southeast corner.

Sanford Stadium is one of the few football stadiums oriented east-west and not north-south.

You can find Sanford Stadium upper and lower tickets, club seats, group tickets, and e-tickets here. And next time you want to see an event at Sanford Stadium in Athens, GA, shop here at ClickitTicket and find all kinds of tickets on sale.

We work with a trusted and vetted network of event ticket suppliers. Ticket prices are set by the demand of the event. And you can rest easy because all our tickets are 100% guaranteed.

We offer a number of payment options for your convenience including Master Card, Visa, Discover, Diner's Club and American Express.

All ticket sales are final. Our tickets are unique and can't be replaced, therefore there are no exchanges or refunds. If an event is rescheduled or postponed, your tickets will be honored for the new date.

You can choose either standard or express delivery and you can specify special delivery instructions if necessary. Your tickets will be shipped to you using Federal Express.

Your tickets will be shipped to you using Federal Express. And your order will be processed right after you buy them using our secure server.