Radio City tickets can be purchased here where you'll discover a gigantic selection of tickets.

You can search the times and dates above to find the specific Radio City Christmas Spectacular show you want to attend.

Click on the red 'Tickets' button to see all the available seats for that Radio City Christmas Spectacular performance, along with an interactive seating chart that will help you locate the best seats for your price.

You'll have to choose how many tickets you want to purchase for Radio City Christmas Spectacular, and then you'll be brought to our secure checkout.

You'll be brought to the seating chart where you can sort from the cheapest to the highest pricing. Discover a wide range of cheap Radio City Christmas Spectacular tickets, including discount seats or last-minute ticekts, premium seating, center stage, balcony, box seats and orchestra seating too.

Shipping/Delivery Information for Radio City Christmas Spectacular Tickets:
You can choose either standard or express delivery and you can specify special delivery instructions if necessary. Your theater tickets will be shipped to you using Federal Express.

Also, some Radio City Christmas Spectacular tickets may be available for immediate download as e-tickets, or electronic tickets, that you can print right from your device.

New York City boasts a number of Christmas traditions, including ice skating and a tree lighting at Rockefeller Center. Also among the annual events is the Radio City Christmas Spectacular.

A lavish stage production with over 140 performers, the show dates back to 1933, a year after Radio City Music Hall opened its doors. At the helm were the venue's stage producer Leon Leonidoff and designer Vincente Minelli. Two of the scenes – The Rockettes' Parade of the Wooden Soldiers and The Living Nativity – continue as part of the show to this day.

In 1979, the Music Hall moved away from showing films and focused exclusively on live performances. The Christmas Spectacular followed suit and was bumped up to 90 minutes from 30. Technology and special effects have also been added in over the years, including an 3-D film which opens the show.

The Christmas Spectacular has also made appearances outside of Radio City. Having originated in St. Louis as the Missouri Rockets, the Rockettes ventured all the way to Branson's Grand Palace Theatre in 1994 for the first non-Music Hall performance. Since then, various national touring editions have also been staged.

For the event's 75th anniversary in 2007, a completely re-worked production was put up, designed and choreographed under the Linda Haberman watchful eye. That year's show was filmed and released on DVD.

To prove its mettle as a Christmas tradition, more than one million people see the show each year in New York City.

The updated show opens with the Rockettes performing "Ring Out Those Bells," during which Santa Claus appears. The scene evolves into a 3-D film of Santa in his sleigh en route from the North Pole to New York City. He passes the Statue of Liberty and the Empire State Building before landing in Radio City Music Hall. Once there, Santa hosts the show.

Musical numbers include "The Twelve Days of Christmas," "The Parade of the Wooden Soldiers,” "New York at Christmas," "I See Santas Everywhere," "Magic Is There," "Ragdolls," "Let Christmas Shine," and "Joy to the World." To see the show live, you'll find a large selection Radio City Christmas Spectacular tickets here.

Radio City Music Hall is a spectacular Art Deco theater located in Midtown Manhattan, New York City. Commonly referred to as the Showplace of the Nation, it is one of the top tourist destinations in NYC.

The venue holds 6,015 seats and features the largest indoor TV screen and stage in the world.

It was launched on December 27, 1932, since then, more than 300 million people have gone to the venue to enjoy stage shows, concerts, movies, and special events.

mongst the many notable parts of the Music hall is its massive auditorium, which by the time the Hall was launched, was the world’s largest. Radio City Music Hall is a historical landmark and NYC icon that the Rockettes are proud to call home. 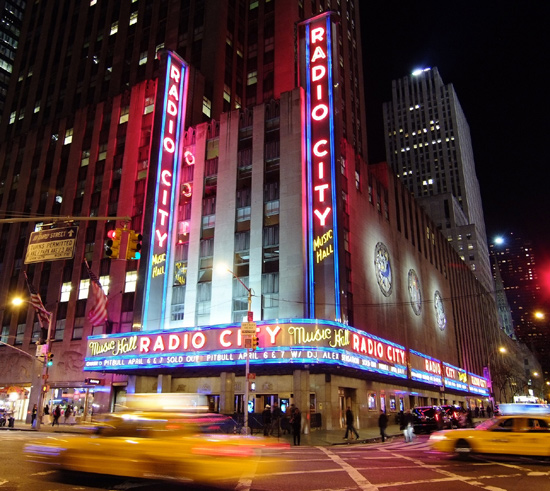 Radio City Music Hall was constructed on a plot that was meant for the Metropolitan Opera House.

The development of the Rockefeller Center premiered following the cancellation of the Opera House plans in 1929.

This new complex featured two theatres: Center Theatre and the International Music Hall, with the latter running successfully up until the 70s when declining patronage almost lead it to bankruptcy.

In the mid-1978, Radio City became an NYC landmark.

The Music Hall was reinstated back to its glory and was once more opened to the public.

What's in a name?

The International Music Hall became the Radio City Music Hall, a name derived from the first tenants of the complex (Radio Corporation of America – RCA).

RCA used to plan mass media events referred to as Radio City on the Rockefeller Complex.

John D. Rockefeller Jr., who was the brainchild of the complex, had his team go to Europe on a cruise to look at the theatres there for inspiration.

The funny thing is that on their way, they were impressed by the sunset view from the ship, so they brought the idea back, which explains why the ceilings of Radio City Music Hall have a golden-arched ceiling.

The red seats depict how the sun reflects on the ocean.

The patrons frequently used it, but in the 1960s, it was closed to the public. Today, celebrities can move from to either side to the other without too much attention, thanks to the tunnel.

The magical transportation of musicians

The intricate system that features a 10,000-pound band vehicle transports musicians right to the Orchestra Pit, which is about 80 feet away, without the audience knowing.

Uniform appearance for the venue

Although the costumes of the Rockettes changes several times in a show, the theatre details remain unchanged from 1932. Since it was designated as the NYC historical and national landmark in 78 and 87 respectively, Radio City Music Hall has to maintain its original state.

This includes everything from the carpets and wallpaper to the seats' upholstery. 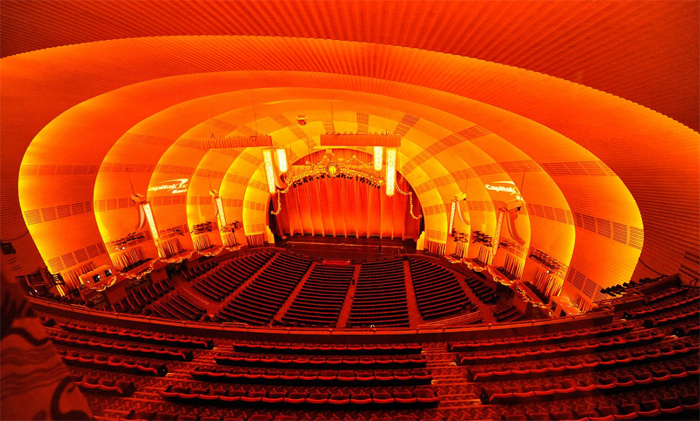 The Radio City has roughly 6,000 seats – divided into five distinct levels. And at ClickitTicket, you can usually find tickets to a large range of Radio City Music Hall seating.

On the theater floor, there's seating in the main Orchestra level as well as in the small Pit Level ahead of the stage.

Fans can also seat on the 1st, 2nd, or 3rd Mezzanine Levels that are opposite to the stage for an elevated view. 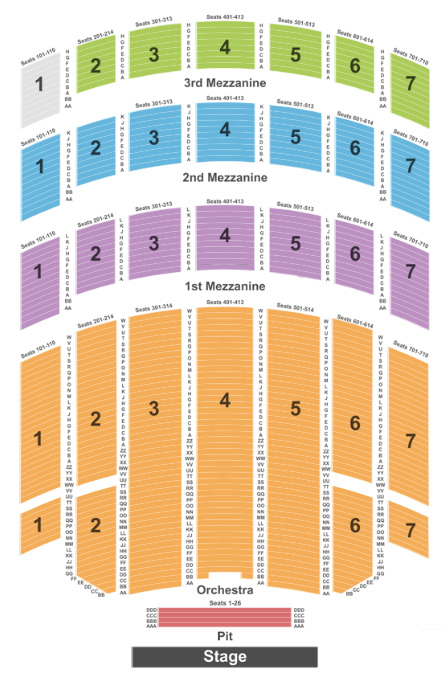 This is one of the best seating positions in the house; it provides fans with an incredible feel for the show.

From the Pit Level seats, one can stand closer to their favorite performers. However, the seats are sometimes unavailable (like in live performance music) for the guests as the show's musicians occupy them.

This level comes after the Pit Level and occupies the rest of the floor at the Hall.

On average, there are about 45 rows on every area of the Orchestra Level, and viewpoints may vary from front rows to the back.

The 1st Mezzanine level provides the same view as the back rows of the Orchestra Seating. Its primary advantage is that it has fewer rows, and therefore those seating here are not likely to have a blocked view. It's especially ideal for shorter people.

3rd Mezzanine Level is farthest from the stage but offers the best seating option. Besides, it has the least number of seats, which makes for a unique and intimate experience. 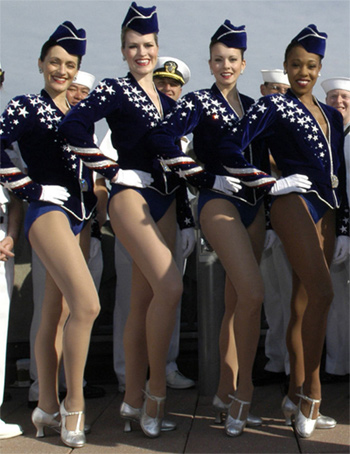 Radio City Music Hall is the home to the Rockettes, a dance company established in 1925 in Missouri.

They have been performing in the Radio City since it' was opened in 1932.

Russell Markert, their founder, got inspiration from “The Tiller Girls” which is a British dance group, as they performed in the Ziegfeld Follies show.

So he started a 16-member group American chorus line of precision and glamorous dancers who could entertain with distinctive flair and style.

Later on, Markert expanded the group from the original 16 to 36 dancers, and their spectacular show began to entertain audiences on a day-to-day basis.

In fact, they would perform up to four shows every day, which meant 28 in a week all year long at the Radio City for the next four decades.

In addition to performing at the Radio City, the Rockettes have also entertained the masses in other prestigious occasions, including the Super Bowl Halftime Show, military tours in World War II, presidential inaugurations and the Macy's Thanksgiving Day parade.

The Rockettes group now has 80 women; however, each cast still has 36 dancers on stage at any given time, just like in the past. And when you buy Radio City Christmas Spectacular tickets here, you can be sure you'll be seeing the Rockettes live! 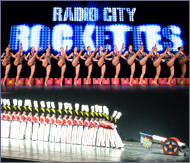