When did the primary ticket market begin?  It began the first time an organizer sold tickets to an event.

It's hard to say exactly when that was, but don't be surprised if the event had something to do with racing chariots.

It's important, and beneficial, to know the history, as well as a few details, about the primary ticket market.

If you want to attend a concert, sporting event, or any other kind of live entertainment you'll have to interact with a primary ticket seller.

Even if you purchase all your event tickets from the secondary ticket market, ticket prices are originally established by the primary seller.

What is the Primary Ticket Market?

The primary ticket market is the original seller of tickets to an event.  When you buy from a box office, or from Ticketmaster's website, you're conducting business with a primary ticket seller.

On the primary market, tickets sell for what is called "face value price."  Basically, it's the price printed on the ticket.

Sometimes artists, managers, or other major players within the live event industry bypass the primary market and sell tickets directly on the secondary market.

While the practice is frustrating to many fans, it does allow tickets to be sold at higher prices. 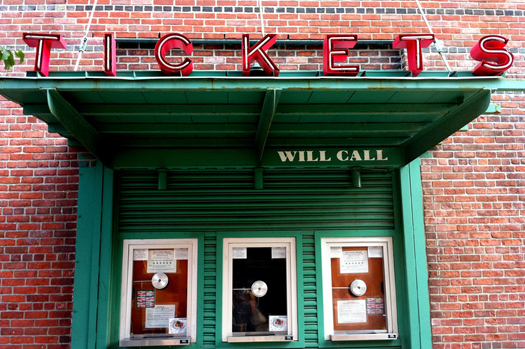 In the 1960s and 1970s, if a popular musician wanted to tour, they needed a hit record and a savvy manager.

Managers worked behind the scenes to book venues in each city the musicians wished to visit.  They joined forces with local promoters to ensure that venues were full—in other words, they made sure all the concert tickets were sold.

Under this system, the local promoter received about 15 percent of the profits.  The manger collected between 15 and 25 percent.  The rest went to the artist.

Today, the concert industry, especially for top tier artists, is more streamlined.  It's been made that way by Live Nation Entertainment and its subsidiaries.

Its most well-known subsidiary is Ticketmaster.

The company is headquartered in Beverly Hills, California but has operations all over the world.  Ticketmaster was founded in Phoenix, Arizona in 1976.

Ticketmaster changed all that with their proprietary technology and their expertise of the industry.

Yet, making it easier to sell tickets was not the main reason venues signed on the dotted line.  They signed because Ticketmaster paid them.

How did Ticketmaster pay for the right to sell other people's event tickets?  They paid for it through the service fees.

In the mid-1990s, Pearl Jam asked Ticketmaster to keep ticket prices below $20 and cap service charges at $1.80.

The company said no.

Like any good grunge band, Pearl Jam severed all ties with the ticketing company.  Then, they went about touring on their own.

To launch a concert tour without Ticketmaster, you not only need to sell your own tickets, but you need to create your own venues.  None of the venues that partnered with Ticketmaster did business with Pearl Jam.

Therefore, the band erected makeshift venues, many of which were in out-of-the-way, rural areas.

The experiment was an abject failure; revealing both the scope, and the great service, Ticketmaster provides.

In June of 1994, members of Pearl Jam testified before congress.  They charged Ticketmaster with being a monopoly.

Their efforts and accusations seemed to pay off when later that year the justice department began investigating Ticketmaster.  The investigation, however, ended in July of 1995 due to a lack of resources and an absence of evidence.

It should be noted that even though Ticketmaster is reviled it is not a monopoly.  Venues do not have to use Ticketmaster's services.  They can choose to partner with any ticket seller they wish.

In 2010, Ticketmaster merged with Live Nation, a company that handled event promotions and venue operations, to form Live Nation Entertainment.

At the time of the merger, Ticketmaster was the alpha and omega of the primary ticket market and Live Nation sat at the zenith of the concert industry—they owned/operated more than 125 venues and annually promoted 22,000 events that served more than 50 million fans.

Many wanted the Obama administration to block the merger.  Instead of denying the companies' plans, the government forced the new conglomerate to sell Paciolan, a self-ticketing company.

"Now that it's united with Ticketmaster, the sky will be the limit when it comes to fees," said Sally Greenberg, executive director of the National Consumers League shortly after the merger was approved.  "It's not enough to say, ‘If you don't like the high prices, don't go to the show.' We need a concert market that has real and robust competition." 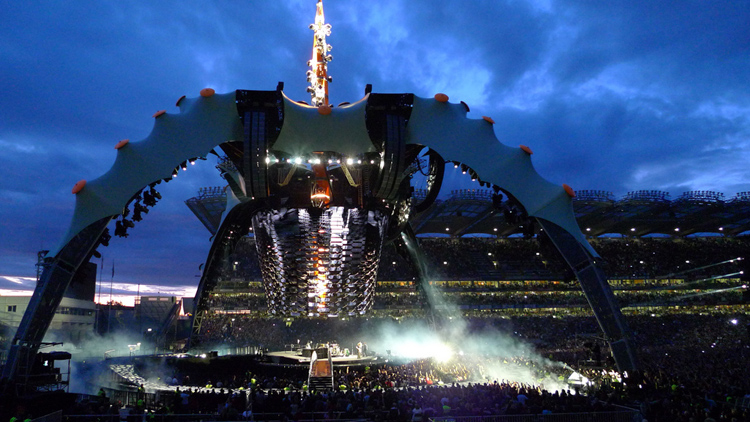 U2's "360° Tour" is the highest grossing concert tour of all-time.  Launched in 2009, and finished in 2011, the trek raked in more than $800,000 and was attended by 7.2 million fans.  It was the first tour U2 launched under its dozen-year contract with Live Nation Entertainment.

U2 is perhaps the greatest seller of concert tickets rock and roll has ever known.  They not only hold the top spot, but three of U2's concert tours are in the top 13 highest grossing concert tours of all-time.

The only band that can even challenge the Irish quartet are the Rolling Stones.  The Stones hold the second spot and three in the top 14.
Even so, U2 is not immune to the tribulations that can befall the live music industry.

It wasn't a lack of ticket sales that nearly did them in, but the high cost of producing their concerts.  According to their manager, if U2 hadn't sold $30 million in t-shirts they would have been "f**ked."

The High Price of Concert Tickets

Granted, '69 was a long time ago, but that increase is far greater than the increase in the price of albums.  As the 1960s waned, vinyl albums were about $3.

At the time of writing this article, you can download Songs of Experience, U2's latest album, for $12 from iTunes or buy the compact disc (deluxe edition) from Amazon for $15.

Interestingly, it's the decline of albums sales that has fueled the astronomical price increases in concert tickets.  Touring is now the artist's main source of revenue.  Depending on who you ask, performing live accounts for two-thirds of a musician's annual salary.

"The public ought to realize as they're complaining about ticket prices, that they're forcing ticket prices up because stealing music from the artists eliminates [a] source of income," said Miles Copeland, former manager of Sting.

For Copeland, stealing music is illegally downloading songs and album from the internet.

The insider also said: "So now the only source of income is tickets and basically the public will have to pay the price of that."

Who Controls Prices on the Primary Ticket Market?

Some artists control the face value price of their concert tickets.  These artists include Bruce Springsteen, Dave Matthews Band, and Phish.  Other artists, like U2, Jay-Z, and Madonna, have ticket prices controlled for them.

This second group signed guaranteed contracts with Live Nation Entertainment.  While this means they'll get handsomely paid (no worries about selling enough t-shirts to avoid bankruptcy), the price of their concert tickets is beyond their financial rheostat.

The first group—Springsteen and et al.—have a business model, and a perceived ethos, that keeps ticket prices low.

While this is admirable, there is an unintended consequence.  Their tickets generally sell for a lot more on the secondary ticket market.  By keeping the face value price of their tickets low, they create room for large markups.

And before you applaud these munificent artists for caring more about their fans than their finances, remember that in 1980 it cost just $9.50 to see The Boss in concert.  Whether a big-time artist is charging a lot, or a little, for the opportunity to see them perform, they're still making a fortune.

Artists have no control over service fees.  The primary ticket seller is solely responsible for that cost.

Concert Tickets Could Be More Expensive

If you think concert tickets are expensive now, they could be even more expensive if the primary ticket market sold them for what they're actually worth.

That's right.  Most of the concert tickets you buy—especially tickets for big-time acts—are sold on the cheap.  And by doing so, they allow brokers to sell them on the secondary ticket market for a profit.

Musicians generally don't sell their concert tickets for what they're worth because they don't want to appear greedy and they want to ensure that every show is a sellout.

The secondary ticket market can be rendered obsolete if musicians booked several shows at a single venue instead of one and if they accurately priced their tickets.

By the way, the most expensive concert ticket of all time was $14,700.  The costly ducats were sold to a Led Zeppelin reunion show in 2007.

The Seattle Seahawks vs the San Francisco 49ers at CentureyLink Field

Dynamic pricing is when the price of products/services increases or decreases based on fluctuations in demand.  It's like the pricing model used by commercial airlines.

Say a baseball team is in the playoff race and they're playing a rival that' also competing for a postseason berth.  In this case, the primary seller may increase ticket prices.  Increases can occur as often as every hour.

Benefits of the Primary Ticket Market

The main benefits of buying tickets from the primary market is you get first access to their inventory and you have the choice of buying online or offline.

When buying tickets from the primary market, you are buying directly from the artists' or teams's official ticketing partner.

This usually means you're looking at one venue, and/or one team, which makes your search straightforward and easy.

Pitfalls of the Primary Ticket Market

This is especially true of sporting events and especially true of baseball.  If a team's fortunes, or a band's popularity wanes, a secondary ticket broker may sell tickets for below face value to recoup some of their initial investment.

Another downside of the primary ticket market is it's inconvenient.  Tickets on the primary market are generally sold far in advance of the event.
We live in a face-paced world.

It's hard to know if you can attend an event several weeks, or even several months, in advance.

Even though you can safely resell tickets on the secondary market, there's no guarantee you'll be able to get all your money back, or even resell them.  Also, if you're too busy to attend the event, you might be too busy to resell your tickets.

You can easily avoid this hassle if you wait and purchase tickets closer to the date of the event from the secondary ticket market.

On the secondary ticket market, you can purchase tickets when its convenient for you and you won't have to waste any time in a queue.

Paperless tickets, now called "credit card entry" by Ticketmaster, is when you gain access to an event by using a credit card—the same credit card used to purchase the tickets.

Credit card entry is a measure that primary ticket sellers use to thwart the secondary market.  By putting the focus on the credit card, and not traditional tickets, resellers have nothing they can resell.

The downside to this mechanism is your entire party must enter at the same time and with your credit card.  If you're unable to attend an event that' using credit card entry, the chances are good that you'll be stuck with tickets you can't use, gift, or resell.

History of the Secondary Ticket Market

History of the Primary Ticket Market