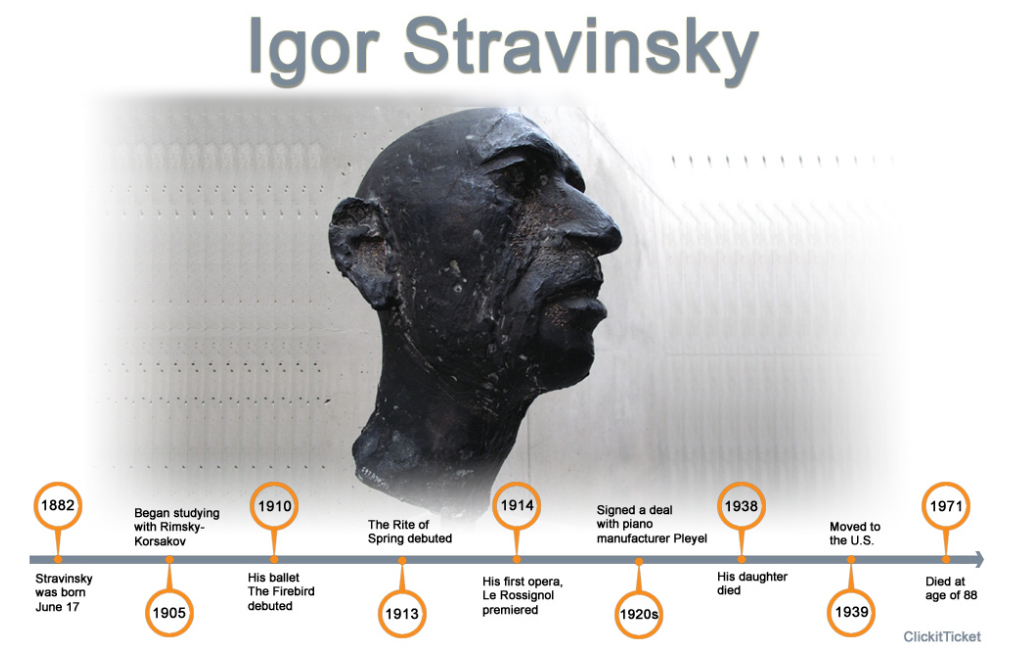 On May 29, 1913, ballet fans packed the Théâtre des Champs-Élysées in Paris, France.  Each attendee paid a hefty sum to see four productions including Igor Stravinsky's The Rite of Spring.

The premiere of The Rite of Spring is one of the most famous premieres in the history of music.  Even those unfamiliar with the ballet know that its debut caused a riot.

Is that what actually happened?  Did a ballet really cause an insurrection?

Prior to its debut, The Rite of Spring was shown to critics and invited guests.  That performance went off without a hitch.

One critic, however, foresaw possible trouble.  He warned that the work may disrespect the audience.  It turned out that this critic was quite the soothsayer.

The Rite of Spring was the second event of the night.  The ballet is about primitive rituals and a young girl dancing herself to death as a sacrifice.

After just a couple of bars Stravinsky's seminal score, the audience began to laugh.  The laughter turned into an uproar, and soon, patrons were throwing anything they find onto the stage and at the orchestra.

Eventually, forty or so of the rowdiest attendees were escorted out of the venue.  They were probably lead out by police although that has never been verified.

What caused such a fracas?  Was it Stravinsky's music?

At the time, ballet attracted two groups of spectators.  The wealthy, who enjoyed traditional ballet, and bohemians, what we would now call hipsters.

This group despised everything the wealthy group enjoyed.

It was these two groups, and their divergent views on art, that fueled the melee. 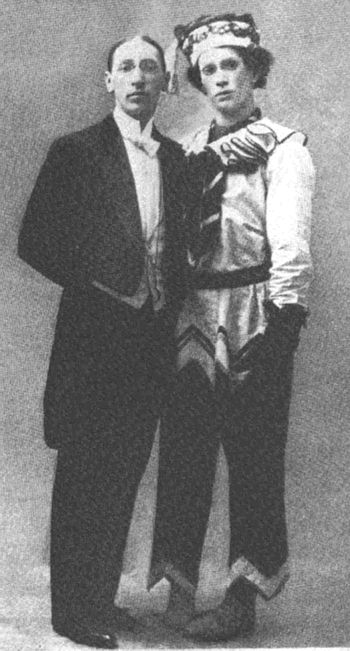 Yet, the crux of their vociferous debate wasn't necessarily Stravinsky's score, or the costumes, although they didn't help, but the dancing.

It was these radical movements that really raised the crowd's dander.

The rioters were so loud that they drowned out the music and forced the composer to watch the production from the wings, seething in anger.

It's hard for moderns to understand how a ballet can cause a brouhaha, but at the time, The Rite of Spring—thanks to Stravinsky's score, the costumes, and the choreography—was literally like nothing anyone had ever seen before.

Despite the disturbance, the ballet never stopped.

Once order was restored, the remaining crowd watched the premiere without incident and in relative silence.

Afterwards, attendees serenaded all parties involved in the production, including Stravinsky and Nijinsky with warm ovations.

The original production received mixed reviews and enjoyed a short run.  It was revived in the 1920s with different choreography.

Nijinsky's original choreography, believed to have been lost, was reinstated in the 1980s for a production by the Joffrey Ballet.

Stravinsky's The Rite of Spring was immensely innovated for its time and highly influential.  It has become one of the most recorded pieces in classical music, and by far, the composer's most popular work.

Stravinsky was born June 17, 1882 in a suburb of St. Petersburg.  He was born into a family with tenuous ties to nobility and a modicum of wealth.

His father was a bass-baritone for the Mariinsky Theatre.

His mother showed talent as a singer and pianist. 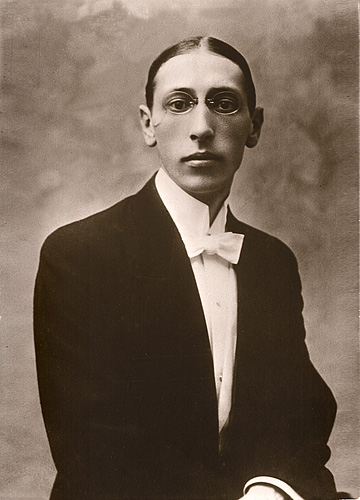 Stravinsky was a lonely child who studied music theory and piano.  Due to his parent's musical proclivities, the young Stravinsky was exposed to opera and ballet.

As a child, Stravinsky showed a passion for music but not much skill—he was a late bloomer.  His parents wanted him to become a lawyer.

In 1901, Stravinsky was enrolled at the University of Saint Petersburg.  He attended the school for four years but hardly went to class.

Rimsky-Korsakov, who became Stravinsky's mentor, advised the budding composer to avoid entering his university's conservatory.  He based his advice on Stravinsky's age.

Stravinsky was quite fond of Rimsky-Korsakov and considered him a second father.

“Katya,” as she was also known, was the daughter of Stravinsky's mother's sister.  In other words, they were first cousins.

In 1909, Stravinsky enjoyed a concert featuring his compositions Scherzo fantastique and Feu d'artifice.

Held in St. Petersburg, this concert was very successful, not necessarily for what it did at the box office, but for who bought one of the tickets. 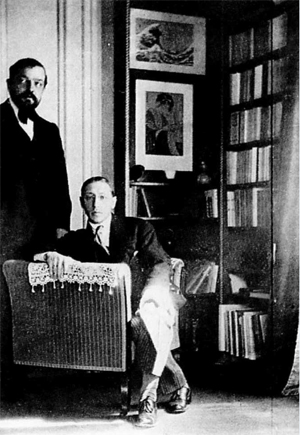 Impresario Serge Diaghilev was in the audience and was captivated by Stravinsky's music.

At the time, Diaghilev was in the process of taking Russian ballet to Paris.

Diaghilev was so impressed that he commissioned Stravinsky to write some orchestrations and eventually a ballet, The Firebird.

The Firebird debuted in 1910 and made Stravinsky a household name.

In 1911, Stravinsky's second ballet for Daighilev, Petrushka, debuted in Paris.  As mentioned earlier, The Rite of Spring debuted in May of 1913.

While The Rite of Spring has become one of the greatest works of all-time, Petrushka masterfully combines music and scene to near-perfect results.

Stravinsky's first opera, Le Rossignol (The Nightingale), premiered on May 26, 1914.

The opera was neither panned nor adored.

The lukewarm reviews came from the fact that the work failed to exceed expectations created by The Rite of Spring.

Stravinsky started composing his next three-act opera, The Rake's Progress, in 1947.  It debuted in 1951.

The Rake's Progress is the pinnacle of Stravinsky's neoclassical period and one of the best operas of the century.  In terms of style, it's a complete “180” from Le Rossignol.

They are so different it's hard to believe they were written by the same composer. 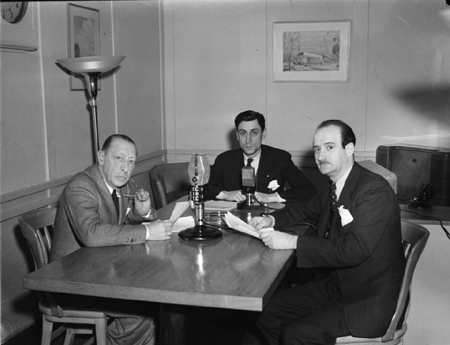 The Russian composer Igor Feodorovitch Stravinsky interviewed by conductor
Jean-Marie Beaudet and host Roger Baulu gathered around a table in the studios
of the C.B.C. station (Radio-Canada) in Montreal.
Created by Josef Kriehuber [Public domain], via Wikimedia Commons

World War I forced Stravinsky to relocate to Switzerland.  The conflagration, and the Russian Revolution, kept the composer out of his home country until the fall of 1962.

It also changed his fortunes.

The final years of the Russian Empire, and the birth of the USSR, made it difficult for Stravinsky to collect royalties.

Meanwhile, to ease his financial burdens, Stravinsky sought, and received, the patronage of Werner Reinhart, a notable Swiss philanthropist.

To show his appreciation, Stravinsky dedicated The Soldier's Tale and Three Pieces for Clarinet to his benefactor.

In the early 1920s, Stravinsky signed a deal with Pleyel, a French company that manufactured pianos.  This deal, which saw Stravinsky rewriting his music for Pleyel's line of player pianos, gave him a steady income and a dedicated studio space.

In 1921, Stravinsky met Vera de Bosset.  Despite both being married, they became romantically involved.  Stravinsky's wife was aware of the affair and struggled between being furious and accepting.

Tragedy besieged Stravinsky in the late 1930s.  His daughter died in 1938 and his wife in 1939.  Both perished from tuberculosis.

Then, during a five-month stay in the hospital, Stravinsky had also contracted tuberculosis, his mother died.

In 1939, with another world war commencing in Europe, Stravinsky sailed to the United States.  He had been booked to lecture at Harvard.

In 1940, Stravinsky married de Bosset in Bedford, Massachusetts.  They relocated to West Hollywood.

Stravinsky enjoyed life in Southern California during World War II.  He was able to rub elbows with prominent artistic types, many of whom had also fled Europe.

Whether it was art or literature, Stravinsky was always looking for new and dynamic inspirations.  He was an intellectual and quite witty but had a malicious temperament.

Despite his affairs (including an alleged affair with Coco Channel), Stravinsky was reportedly very devoted to his children.

In 1944, a Stravinsky-related performance caused another stir.  This event occurred in Boston and involved the “Star-Spangled Banner.”

The composer arranged the National Anthem, and in doing so, added a dominant seventh chord.  Boston police told Stravinsky that rearranging the anthem is punishable by a $100 fine.

Music lore states Stravinsky was arrested and held in custody for several days.

None of those events ever happened nor was there a law forbidding the rearranging of the “Star-Spangled Banner.” 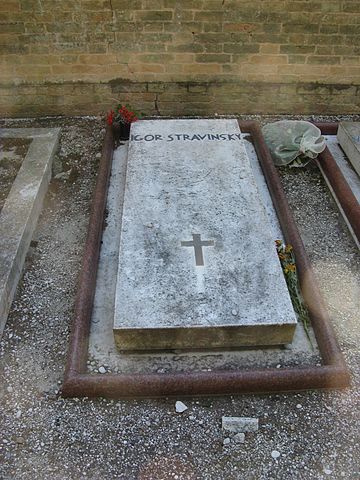 In 1962, Stravinsky was invited to Leningrad for a series of performances.  While in the USSR, he visited Moscow and met several leading Soviet composers.

New York City was Stravinsky's final home from 1969 until his death in 1971.  The composer died of heart failure at the age of 88.

Stravinsky was buried in Italy close to the man that gave him his first big break, Sergei Diaghilev.

Stravinsky is the father of modern music, at least what we call “modern music.”

He raised rhythm, especially in large scale works, to an art form.

His works can be into three periods: Russian, Neoclassical, and Serial.

Regardless of the period, Stravinsky was able to write diverse compositions while keeping his unique style.

His name may not be synonymous with classical music like Mozart's and Beethoven's, but it's undeniable that Stravinsky is one of the world's greatest composers. 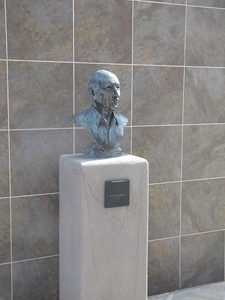 By Vivaverdi2013 (Own work)
via Wikimedia Commons