Purchase PBR tickets right now. You'll discover a huge selection of Professional Bull Rider tickets available and buying tickets here is simple, safe and secure. Either choose the PBR event above by clicking the 'Tickets' button or call us at 1-866-837-0608.

How to Buy PBR Tickets Here

Above is the live PBR event schedule. Click on the red 'Tickets' button to see all the available seats for that PBR event, along with an interactive seating chart that will help you locate the best seats for your price.

You'll have to choose how many seats you want to purchase for the PBR event, and then you'll be brought to our secure checkout.

PBR ticket prices may be above or below face value and can fluctuate. To find the current pricing, click the red 'Tickets' button above.

You'll be brought to the seating chart where you can sort from the cheapest to the highest pricing. Discover a wide range of cheap Professional Bull Riders tickets. All our tickets are 100% guaranteed.

PBR Tickets Refund Policy:
All ticket sales are final. Our PBR event tickets are unique and can't be replaced, therefore there are no exchanges or refunds. If an event is rescheduled or postponed, your tickets will be honored for the new date. Learn more.

Shipping/Delivery Information for PBR Tickets:
You can choose either standard or express delivery and you can specify special delivery instructions if necessary. Your tickets will be shipped to you using Federal Express. Also, some PBR tickets may be available for immediate download as e-tickets, or electronic tickets.

Professional Bull Riders, Inc. was founded in 1992 when 20 cowboys each chipped in $1,000 in the hopes of taking bull riding from a rodeo attraction to a main attraction.

Their risk paid off. Today, the PBR awards over $10 million in prize money and is widely regarded as the world's fastest growing sport.

The PBR sanctions more than 300 competitions a year in the United States, Australia, Brazil, Canada, and Mexico. 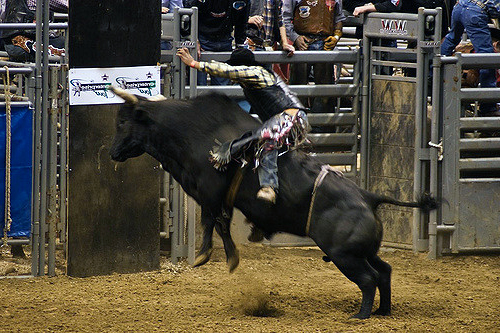 There are three minor league circuits: the Challenger Tour, the Enterprise Rent-A-Car Tour, and the Discovery Tour. Finally, there are several international circuits taking place in the last four aforementioned countries. The PBR season lasts from January to May and then from August to October.

It culminates in the World Finals held in Las Vegas, Nevada. This highly anticipated annual event crowns a PBR champion who is rewarded with an additional $1 million bonus.

What Exactly is Professional Bull Riding?

The sport of professional bull riding sounds simple but it's obviously extremely tough to master. The rider sits on top of a 2,000 pound bull with the hopes of holding on for eight seconds and impressing the judges.

Judges look for a rider's ability to match the bull's movements. As for the bull, judges look for how difficult the beast makes it for the rider to hold on. The bulls are randomly assigned to riders via a draw held days before each event.

The PBR uses more than 20 livestock contractors throughout the year. The main circuit needs about 75 bulls for each tour stop.

The Built Ford Tough Series consists of 31 regular-season events and the World Finals. Most of these events span two days and follow the same format.

On day one, the top 45 competitors ride one bull. On the second day, they ride another bull. Then the top 15 riders advance to the finals which are held after an intermission on day two.

The winner is the rider with the highest three-ride total. 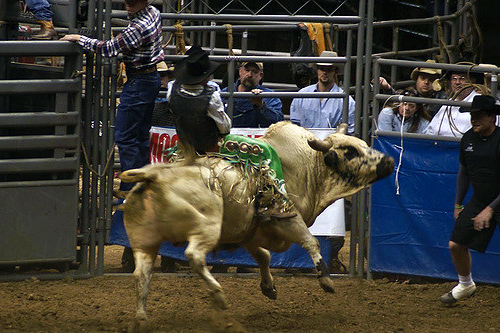 If you can't get professional bull riders tickets, you can always watch the action on television. Every year, PBR produces 500-plus hours of television programming on the networks of VERSUS, NBC, ESPN, FOX, and CBS.

Add that number to the 1.7 million fans that attend live PBR events every year and you can see why the so-called "toughest sport on dirt" was definitely worth the initial $1,000 investment. 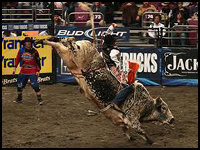