Purchase Portland Timbers tickets right now. You'll discover a huge choice of Timbers game tickets available. There is nothing like experiencing an MLS soccer game in person with all the other like-minded soccer fans.

Ordering Portland Timbers tickets here is simple, safe and secure. Either choose the Timbers game above by clicking the 'View Tickets' button or call us at 1-866-837-0608. We're committed to getting you into the perfect seats for your budget, whether it's for a home game in Portland or on the road.

You can search all the game listings above to find the specific Portland Timbers game you want to attend.

Click on the red 'View Tickets' button to see all the available seats for that Timbers soccer game, along with an interactive seating chart that will help you locate the best seats for your price.

You'll have to choose how many seats you want to purchase for the Timbers MLS game, and then you'll be brought to our secure checkout.

Portland Timbers ticket prices may be above or below face value and can fluctuate. You'll find Portland Timbers MLS game tickets here at relatively affordable prices. To find the current pricing, click the red 'View Tickets' button above.

You'll be brought to the seating chart where you can sort from the cheapest to the highest pricing. Discover a wide range of cheap Portland Timbers tickets for both home and away games, including discount seats or last-minute and low-priced deals, premium seating like box and club seat tickets, center field tickets, behind the home or visitor benches or goals, and tickets to sold out MLS games too. You can rest easy because all our tickets are 100% guaranteed.

Timbers Tickets Refund Policy:
All Major League Soccer ticket sales are final. Our Timbers tickets are unique and can't be replaced, therefore there are no exchanges or refunds. If an event is rescheduled or postponed, your tickets will be honored for the new date. Learn more.

Shipping/Delivery Information for Timbers Tickets:
You can choose either standard or express delivery and you can specify special delivery instructions if necessary. Your MLS tickets will be shipped to you using Federal Express. Also, some Timbers tickets may be available for immediate download as e-tickets, or electronic tickets, that you can print right from your device.

What's Going On in Portland

The Next Scheduled Sporting Events in Portland

About The Portland Timbers

Do you want season tickets to the Portland Timbers?

There are Timbers fans chomping at the bit to be a season ticket holder. In fact, the Timbers have more people on their season tickets waiting list than any other team in the MLS.

Oregon loves soccer.  Fans in the Beaver State have bought every ticket to the first 65 Timbers home games.

The team’s main supporters group, the Timbers Army, number more than 4,000 and create a European-like atmosphere at home games.

The Timbers played their first MLS game in 2011. During their first four seasons of competition, they qualified for the MLS playoffs just once, 2013.

Kenny Cooper scored the first goal for the Timbers on March 19, 2011.

The Timbers play their home games at Providence Park in downtown Portland. The venue is also home to the Portland Thorns FC of the NWSL and the Portland State Vikings football team of the Big Sky Conference.

The team’s name goes all the way back to 1975 and the Portland Timbers of the North American Soccer League. The current Timbers are the fourth team in Portland to use the name.

The Portland Timbers main rivals are the Seattle Sounders.  This rivalry is fueled by proximity as Portland and Seattle are separated by just 175 miles (which is right next store in the Pacific Northwest).

The Timbers other rival is the Vancouver Whitecaps FC.  All three teams compete for the Cascadia Cup 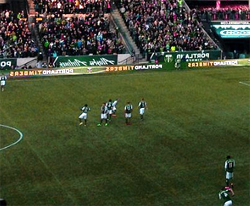