Purchase Montreal Impact tickets right now. You'll discover a massive selection of Impact game tickets available. There is nothing like experiencing an MLS soccer game in person with all the other like-minded soccer fans.

Purchasing Montreal Impact tickets here is simple, safe and secure. Either choose the Impact game above by clicking the 'View Tickets' button or call us at 1-866-837-0608. We're committed to getting you into the perfect seats for your budget, whether it's for a home game in Montreal or on the road.

You can search all the game listings above to find the specific Montreal Impact game you want to attend.

Click on the red 'View Tickets' button to see all the available seats for that Impact soccer game, along with an interactive seating chart that will help you locate the best seats for your price.

You'll have to choose how many seats you want to purchase for the Impact MLS game, and then you'll be brought to our secure checkout.

Montreal Impact ticket prices may be above or below face value and can fluctuate. You'll find Montreal Impact MLS game tickets here at relatively affordable prices. To find the current pricing, click the red 'View Tickets' button above.

You'll be brought to the seating chart where you can sort from the cheapest to the highest pricing. Discover a wide range of cheap Montreal Impact tickets for both home and away games, including discount seats or last-minute and low-priced deals, premium seating like box and club seat tickets, center field tickets, behind the home or visitor benches or goals, and tickets to sold out MLS games too. You can rest easy because all our tickets are 100% guaranteed.

Impact Tickets Refund Policy:
All Major League Soccer ticket sales are final. Our Impact tickets are unique and can't be replaced, therefore there are no exchanges or refunds. If an event is rescheduled or postponed, your tickets will be honored for the new date. Learn more.

Shipping/Delivery Information for Impact Tickets:
You can choose either standard or express delivery and you can specify special delivery instructions if necessary. Your MLS tickets will be shipped to you using Federal Express. Also, some Impact tickets may be available for immediate download as e-tickets, or electronic tickets, that you can print right from your device.

What's Going On in Montreal

The Next Scheduled Sporting Events in Montreal

About The Montreal Impact

Montreal Impact is the 19th franchise accepted into Major League Soccer and the third MLS club to be based in Canada.

The team’s home pitch is Saputo Stadium or Stage Saputo in French.  Regardless of what language you use, the venue is a soccer-specific stadium.

The first six games of the Impact’s inaugural season were played at nearby Olympic Stadium.  This venue is used for big matches like the home openers, playoff games, and international fixtures.

In fact, the team’s Montreal debut was made at Olympic Stadium in March of 2012.  That game attracted over 58,000 fans.  In May, the team played in front of 60,860—a record for a professional soccer game in the Great White North.

In 2015, the Impact advanced to the final round of the CONCACAF Champions League.  They were just the second MLS club and the first one from Canada to make it to that tournament’s finale.

The Impact’s main rivals are Toronto FC.  Their annual clashes are dubbed the 401 Derby.

Although not as contentious as their opposition to Toronto, the Impact also has a rivalry with Canada’s other MLS club, the Vancouver Whitecaps.

Ultras Montreal, also known as UM02, are the team’s main supporters group.  They follow the club whenever it goes on the road to play MLS teams in the Northeast. 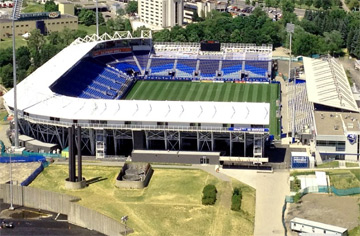