Purchasing NASCAR tickets here is simple, safe and secure. Either choose the NASCAR race above by clicking the 'Tickets' button or call us at 1-866-837-0608.

How to Buy NASCAR Tickets Here

Above is the NASCAR event schedule. Click on any of the red 'View Tickets' buttons to see all the available seats for that NASCAR event, along with an interactive seating chart that will help you locate the best seats for your price.

You'll have to choose how many seats you want to purchase for the NASCAR event, and then you'll be brought to our secure checkout.

NASCAR race ticket prices may be above or below face value and can fluctuate. You'll find tickets here at relatively affordable prices. To find the current pricing, click the red 'View Tickets' button above.

You'll be brought to the seating chart where you can sort from the cheapest to the highest pricing. Discover a wide range of cheap NASCAR tickets, including discount seats or last-minute and low-priced deals here. You can rest easy because all our tickets are 100% guaranteed.

NASCAR event Tickets Refund Policy:
All ticket sales are final. Our NASCAR race tickets are unique and can't be replaced, therefore there are no exchanges or refunds. If an event is rescheduled or postponed, your tickets will be honored for the new date. Learn more.

Shipping/Delivery Information for NASCAR event Tickets:
You can choose either standard or express delivery and you can specify special delivery instructions if necessary. Your tickets will be shipped to you using Federal Express. Also, some NASCAR tickets may be available for immediate download as e-tickets, or electronic tickets.

The sports landscape in America changed significantly after the proliferation of one little appliance, the television set. Before TV’s ascension, Americans were enthralled by baseball, boxing, and horse racing. Once the technology to broadcast live sporting events arrived, Americans turned to football and NASCAR.

In 1979, for the first time ever, CBS broadcasted NASCAR’s premiere race, the Daytona 500, live and in its entirety. Ratings were boosted by a snowstorm that sent residents of the northeast, and parts of the Midwest, inside and in front of their television sets. What they witnessed was an exciting race that ended with brothers Bobby and Donnie Allison fighting Cale Yarborough. NASCAR enthusiasts and sports historians point to this race as the moment NASCAR stopped being a regional sport and gained national significance.

Today, in the United States, NASCAR is the second most watched sport on television behind only the NFL. Internationally, NASCAR races are seen in more than 150 countries. Every year, millions of fans buy NASCAR tickets to 36 races spread out over ten months. Popular tracks on the NASCAR circuit include Bristol Motor Speedway, Darlington Raceway, Indianapolis Motor Speedway, Martinsville Speedway, and Talladega Superspeedway.

When fans and pundits say “NASCAR” they usually mean the Sprint Cup Series. However, NASCAR is much more than that. Unlike other alphabet sports league who basically oversees one league, NASCAR is an organization that sanctions and governs several racing circuits. The Sprint Cup Series is the organization’s premiere product. NASCAR’s other two major racing circuits are the Nationwide Series and the Camping World Truck Series. Overall, NASCAR presides over 1,500 races at more than 100 race tracks.

The National Association for Stock Car Auto Racing was founded in 1948 by William France, Sr. NASCAR is owned by the France family and is currently operated by his grandson, Brian France. NASCAR is headquartered in Daytona Beach, Florida but it has offices in four North Carolina cities, as well as New York, Los Angeles, Mexico City, Toronto, and Bentonville, Arkansas. While the sport has expanded its fan base to include more than just the southern part of the United States, most of the teams are based in or around Charlotte, North Carolina.

Some of the greatest NASCAR drivers include Richard Petty, David Pearson, Dale Earnhardt, Darrell Waltrip, Rusty Wallace, Bill Elliott, Jimmie Johnson, Jeff Gordon, Tony Stewart, and Dale Earnhardt, Jr. Petty and Earnhardt (senior) have each won seven Sprint Cup Series Championships (the award given to the driver who has the best season). Johnson won the championship from 2006 to 2010 and again in 2013. 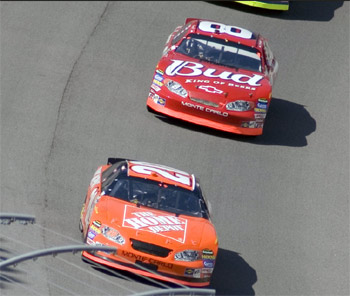