When the Red Sox play the Rays expect to see a great game. There's nothing like going to the ballpark to watch your favorite players and team play America's past time. From the double plays, diving catches and strike outs, to the triples, home runs and grand slams, Fenway Park is going to be rockin' with like minded Boston baseball fans.

Finding the Best and Cheapest Red Sox vs. Rays Tickets

To find the current Red Sox Rays ticket pricing, click the red 'View Tickets' button above. Boston Red Sox vs. Tampa Bay Rays ticket prices may be above or below face value and can fluctuate.

You'll find almost any kind of Red Sox vs. Rays seats here. Whether you want Fenway Park bleacher tickets, behind home plate or the dugouts, box seats, outfield and infield seating, grandstand seating, last-minute tickets, electronic-tickets, sold out game tickets or just plain cheap Boston Tampa Bay tickets, you'll find them here. And if the Red Sox make it to the World Series, we'll tickets for that too.

Refund Policy:
All ticket sales are final. Our Red Sox vs. Rays game tickets are unique and can't be replaced, therefore there are no exchanges or refunds. If an event is rescheduled or postponed, your tickets will be honored for the new date. Learn more.

Shipping/Delivery Information for Red Sox vs. Rays Tickets:
You can choose either standard or express delivery and you can specify special delivery instructions if necessary. Your MLB tickets will be shipped to you using Federal Express. Also, some Red Sox vs. Rays tickets may be available for immediate download as e-tickets, or electronic tickets.

About The Boston Red Sox

The Boston Red Sox were founded in 1901 as the Boston Americans. The "Americans" nickname wasn't official; it was just a generic label hastily given to the team. The nickname "Red Sox" was officially adopted by the team in 1908.

Where the Red Sox Got Their Name

The nickname was chosen by the team's owner at the time, John I. Taylor, at the conclusion of the 1907 season. It referred to the red hose present in the team's uniform. The spelling came from newspaper writers who couldn't always fit the word "stockings" in a headline.

The early Red Sox were quite successful, they won the first World Series in 1903 and four more by 1918. Then something happened...

After the 1918 season, the Red Sox sold Babe Ruth to the New York Yankees. What followed was an 86-year championship drought. Many called it the "Curse of the Bambino"—punishment for trading baseball's greatest player.

The team was competitive during this title drought, winning the AL pennant in 1946, 1967, 1975, and 1986. They also found themselves on the wrong side of some of baseball's most infamous moments: Enos Slaughter's "mad dash" in 1946 and Bill Buckner's error in the 1986 World Series. They could win; they just couldn't win a championship.

The End of the Red Sox Curse

What's Going On in Boston

The Next Scheduled Sporting Events in Boston

The Next Games on the Boston Red Sox Schedule

The Next Games on the Tampa Bay Rays Schedule 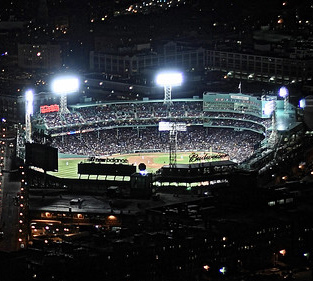