Purchase Kansas City Royals tickets and experience the MLB in person and up close. You'll discover a gigantic choice of Royals game tickets available. From the first pitch to the last out, being at a Royals game is unforgettable.

Purchasing Kansas City Royals tickets here is easy, safe and fast. Either choose the Royals game above by clicking the 'View Tickets' button or call us at 1-866-837-0608. We're committed to getting you into the best ball park seats for your budget, whether it's for a home game in Kansas City or a game on the road.

You can search all the game listings above to find the specific Kansas City Royals game you want to attend.

Click on the red 'View Tickets' button to see all the available seats for that Royals baseball game, along with an interactive seating chart that will help you locate the best seats for your price.

You'll have to choose how many tickets you want to purchase for the Kansas City Royals MLB game, and then you'll be brought to our secure checkout.

About The Kansas City Royals

The Kansas City Royals are a Major League Baseball team based out of Kansas City, MO. A member of the MLB’s Central Division, the Royals call Kauffman Stadium home. Since its inception, the team has progressed to win one World Series title in 1985.

Kansas City got the Royals name from a livestock, horse and rodeo show dubbed “The American Royal.” The team’s mascot is Sluggerrr, a lion that made its first appearance in Kauffman Stadium in 1996. During games, Sluggerrr is responsible for shooting off hot dogs into the crowd from an air cannon and pitching in what’s known as the “Little K.”

The Kansas City Royals entered the MLB in 1969 as an expansion franchise team. The team is perhaps most well-known in the league for the Pine Tar Incident of the mid-80s. This incident occurred after umpires discovered illegal placement of pine tar on the bat of Royals player George Brett during a game with the Yankees. Brett was ejected from the game after protesting (vehemently) the umps decision to disallow the home run received off of the hit with the tainted bat. However, the home run was later re-instated by the commissioner of baseball and the Royals went on to claim victory against the Yankees.

One of the Royals biggest rivalries has traditionally been with the New York Yankees; however, this rivalry has begun to lose steam as the Yankees rivalry with the Boston Red Sox has become more prominent than just about any other in baseball today.

Other division rivalries for the Royals include the Chicago White Sox, Detroit Tigers, Cleveland Indians and the Minnesota Twins.

Kansas City Royals ticket prices may be above or below face value and can fluctuate. You'll find Kansas City Royals MLB game tickets here at relatively affordable prices. To find the current pricing, click the red 'View Tickets' button above.

You'll be brought to the seating chart where you can sort from the cheapest to the highest pricing. Discover a wide range of cheap Kansas City Royals tickets for both home and away games, including discount seats or last-minute and low-priced deals, top-notch premium seating like box and club seats, behind home plate, first, third and bleacher seating too. You can rest easy because all our tickets are 100% guaranteed.

Royals Tickets Refund Policy:
All ticket sales are final. Our Royals tickets are unique and can't be replaced, therefore there are no exchanges or refunds. If an event is rescheduled or postponed, your tickets will be honored for the new date. Learn more.

Shipping/Delivery Information for Royals Tickets:
You can choose either standard or express delivery and you can specify special delivery instructions if necessary. Your MLB tickets will be shipped to you using Federal Express. Also, some Royals tickets may be available for immediate download as e-tickets, or electronic tickets, that you can print right from your device.

What's Going On in Kansas City

The Next Scheduled Sporting Events in Kansas City 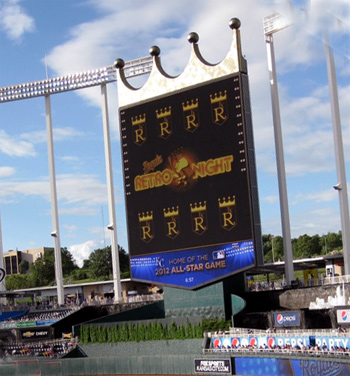