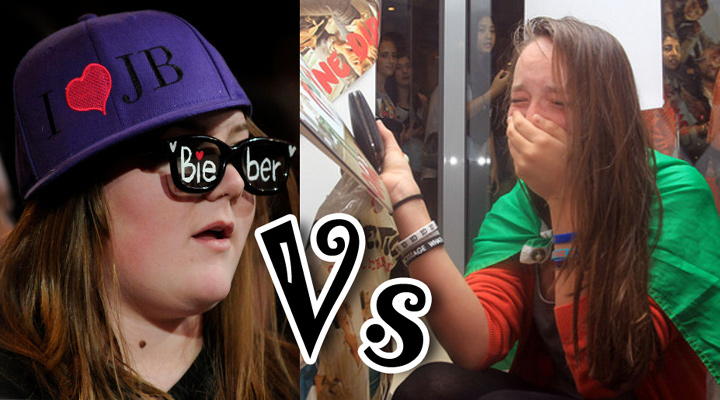 Justin Bieber or One Direction:
Who has the most Insane Fans?


The online preparation for the latest teen sensation must be of the most epic proportions. Geared up, ready for the overhaul of fandom about to spill onto various websites, detailing the most intimate, strange, loveable, surprising or insane stories about our favourite pop stars.

These are the fans that make the artists themselves shake in their boots, and also the fans that the stars need the most to prove their fandom’s worth.

Those are tears of love.

The girls are willing to do anything for their favourite boy band or singer, whether it be waiting out in the freezing cold for twelve hours plus or inking their skin with lyrics, and they keep the fandom truly alive.

So, who has the craziest fans out of the two hottest male acts of the decade; teen superstar Justin Bieber’s ‘Beliebers’, or the One Direction ‘Directioners’?

The most famous example of an insane reaction to the very mention of Bieber’s name is three-year-old girl Cody, who cried hysterically over how much she loves the teen star. After being filmed by her family crying in her sister’s arms, she became an overnight YouTube hit with the video having over 2 million views.

Cody’s dream came true, after Bieber watched her video – she appeared on the Jimmy Kimmel show in February 2010. After speaking with Justin over the phone on the show, to Cody’s surprise, he appears and her reaction this time is more one of disbelief!

Bieber fever has spread not just throughout the states. We also see teenage girls crying and screaming in Mexico, just because Justin’s concert has sold out, leaving no more tickets left for unlucky fans. Not to fret; it appears that no one had died on this occasion, but the girls are inconsolable after realising they won’t be seeing Justin perform after all!

A distraught directioner in Sydney

In one particular case, a young fan fainted after shaking band member Zayn’s hand at a signing, leaving poor Zayn gobsmacked as the girl had to be carried out of the shopping centre.

The boys also surprised lucky fans in Toronto in April this year, as part of Canadian show MuchMusic. The decibel level can only be described as colossal as the boys reveal themselves to a room of about 30 shocked female fans.

Etsy.com, the online gift community site, has plenty in store for us in relation to Justin Bieber and One Direction fan-made goodies (and baddies).

Here are the best of the best:


3. Tattoos of Justin Beiber vs. One Direction - Yikes!

Believe it or not, fans are crazy enough to have a tattoo
of Justin Bieber’s face on their leg.

Or on their arms.

So far, it looks like not many fans have had 1D tattoos. Not real ones anyway! Here’s to the future though – at least fans can practise safely.

Bieber has even been created into a wax figure for the Madrid Wax Museum in Spain – we are not entirely sure if they have actually seen the star in real life, according to the below image. Just creepy.

Shockingly, one fan has enquired on a plastic surgery website how he can get his nose to look just like his hero’s!  Now that is one crazy fan.

The Directioners are sure not shy about showing their devotion for the British band. Videos have been uploaded to YouTube showing groups of 1D fans creating ‘spontaneous’ dance performances to the band’s hits. These, of course, are pre-planned and incredibly entertaining. One of the best of the videos is one shot in Sydney after the band visited Australia (gets good about 3 minutes in).


5. 1D and Beiber Get Accosted

This is a most interesting part of pop fandom – fans that are so obsessed with their icon that they will do almost anything to be near them! Justin Bieber’s recent attack by a proposed ‘crazed fan’ proves this. In June 2011, Justin appeared at Macy’s in NYC to celebrate the launch of his fragrance ‘Someday’.

Bieber appeared in front of thousands of fans outside the store, prompting a crowd of girls to emerge from the barricade. An off-duty police officer tried to stop the girls, but it was Bieber’s bodyguards who grabbed the man and pinned him to the floor in error.

One Direction have also had their fair share of close encounters. One recent article mentions how band member Harry Styles was attacked by a female fan while on stage with, of all things, a tampon. Strange, but true! Styles was attacked again, this time by something a little friendlier – cake. The boys were also mobbed by a massive crowd at a Parisian train station, with one band member losing a shoe in the process.

Fans of both parties are incredibly interested in the boys’ love lives – this seems to have been taken to extremes when Harry Styles of 1D’s rumoured love interest, TV presenter Caroline Flack, received death threat tweets in a Twitter frenzy. Flack, 31, had an alleged relationship with the 17-year-old, sparking nationwide controversy among fans and the media.

Fans apparently ‘bullied’ a girl out of going on a date with 1D member Zayn too!
The best of all has to be the infamous allegations from teenager Mariah Yeater in early 2011. The 20-year-old fan claimed that Bieber had fathered her child, while backstage at one of his concerts that she had attended. The story turned out to be bogus – cue, the fan backlash. These girls will defend their Canadian love ‘til the death!

This piece of scandal alone proves Justin’s fans as the craziest – FACT! With more fans, who have grown with him, supported him throughout all his endeavours, the ‘Biebs’ has the most devoted, insane fans.

Let’s be fair, this leaves One Directioners not far behind!

May the battle of the fandoms continue.

Shop for One Direction Tickets