Hooking Up at Concerts and With Music

A study of people's sexual behavior while the music plays

Sex and music often go hand in hand. It's two of the three elements that make up 'sex, drugs and rock n' roll' after all! We thought it would be fascinating to explore their relationship a bit more.

Ever wonder how many people "hook up" at a live music concert? For our purposes here, we'll define "hooking up" as having some kind of sexual contact with another person, which could include everything from simple kissing all the way to, well, going all the way.

We anonymously surveyed 300 adults from the United States and asked them about their sexual behavior at concerts (if any), and what they did exactly. And, while we were at it, we also asked them a few other music and sex related questions too. The results were eye-opening.

16% of Respondents Said They had 'Hooked Up' at a Concert 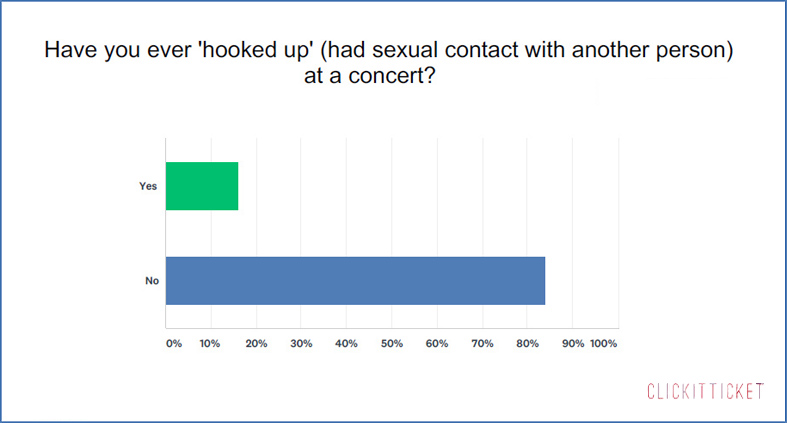 The first thing we discovered was that a full 16% of respondents said they had 'hooked up' at a concert before! There seems to be a lot more hanky panky going on at live shows than one might think. But what kind of sexy behavior have they engaged in while the music played on stage?

6% Actually had Sexual Intercourse While at a Concert! 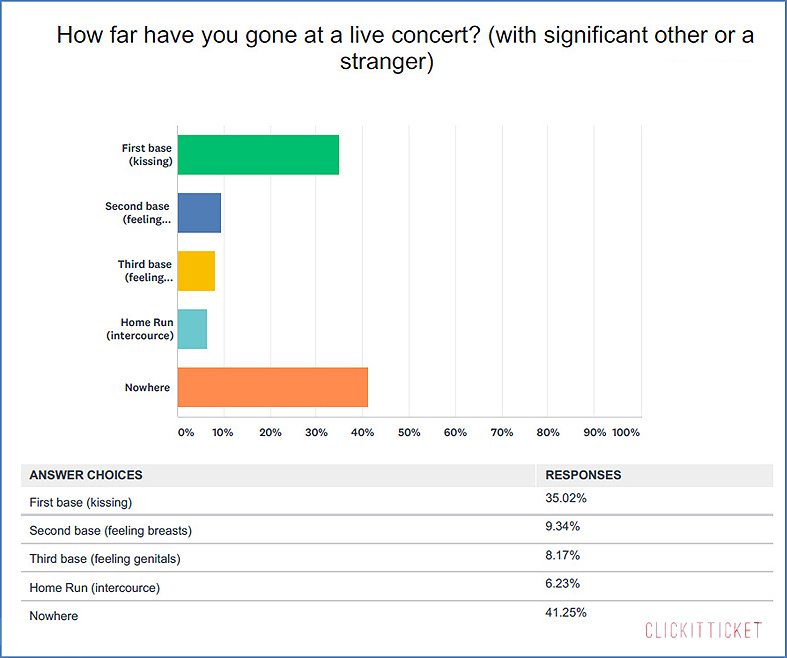 People Like Rock the Most & Heavy Metal Least During Sex 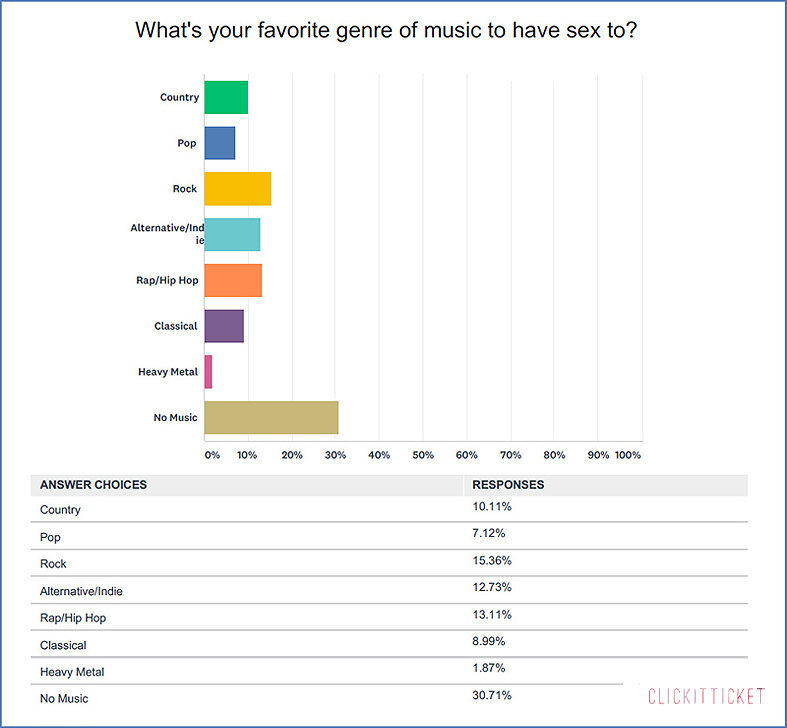 We also thought it would be interesting to learn what types of music (not necessarily live music) people enjoyed making whoopee to. From our survey, it appears that good ol' rock n' roll comes in first at 15%. And heavy metal is the least favorite type of music to have sex to according to our results. However, 30% prefer having sex with no music playing at all. 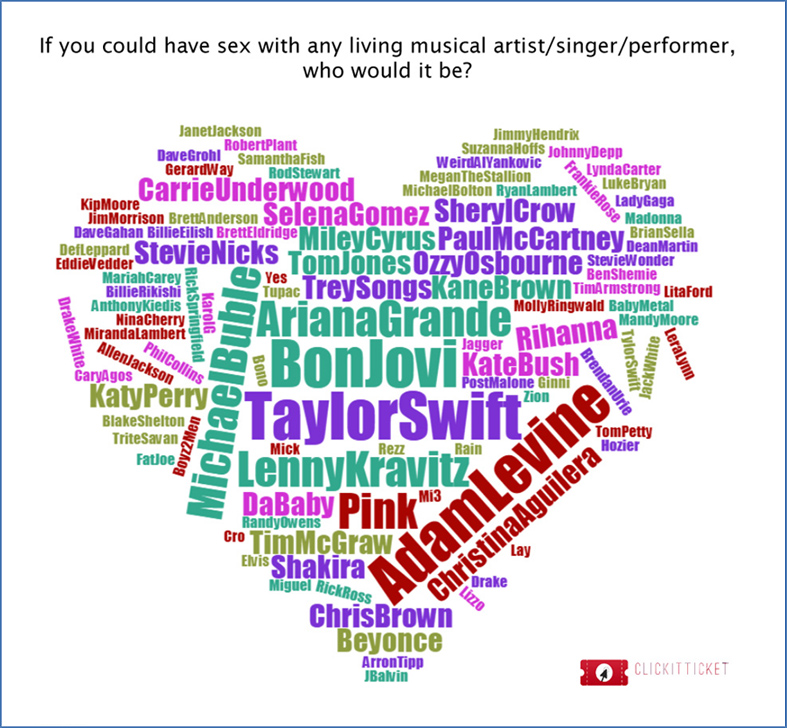 More people want to have sex with Adam Levine, Jon Bon Jovi and Taylor Swift than with any other musical artist. Those three top our charts. And coming in after them are Ariana Grande, Michael Buble, Pink and Lenny Kravitz. As you can see, people's tastes are quite varied, but their are still some clear favorites.

The last three charts below show the demographics of our survey respondents. 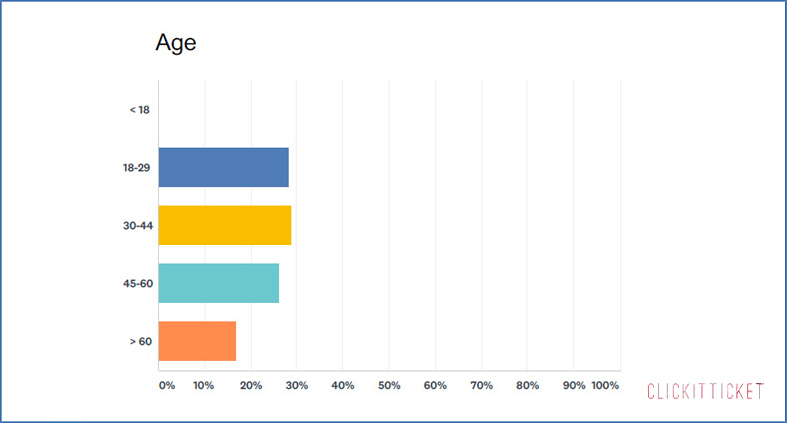 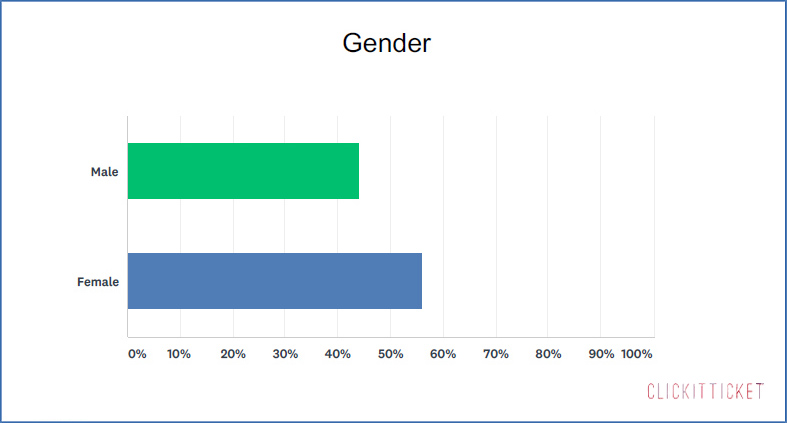 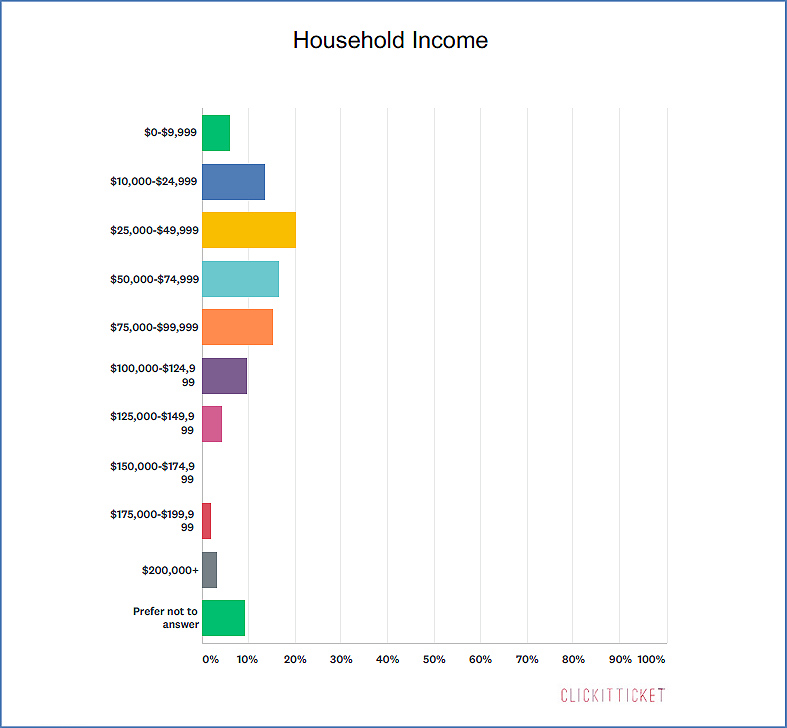 We used SurveyMonkey to anonymously survey 300 U.S. adults. The data we gathered and presented above was based on the answers of the 300 people and depended on self-reporting, which can have inherent biases.

We can't know for sure if some (or any) of the respondents succumbed to a particular bias while answering. Self-reported assessments of sexual behavior are prone to a number of measurement concerns which may affect the reliability and validity of a measure, ranging from a participant's literacy level and comprehension of behavioral terminology to recall biases and self-presentation (or confidentiality concerns resulting from stigmatization of the behavior in question). However, the delivery of risk behavior assessments via the internet or computer can increase a sense of privacy, and may reduce self-presentation biases. Read more about Self-reporting sexual risk behaviors.

Any time you are engaging in any kind of sexual activity, including any examined above, you must always have consent, practice safe sex, and not break any laws.

Please go ahead and share this article, the graphs or images or any of the data if you'd like, just be sure to link back to this page to give us credit.

This original survey and study was a basic examination of this topic only. ClickitTicket does not endorse, approve, or certify the behavior examined above and does not guarantee the accuracy or completeness of the self-reported data presented here.

Find Concert Venues Near You