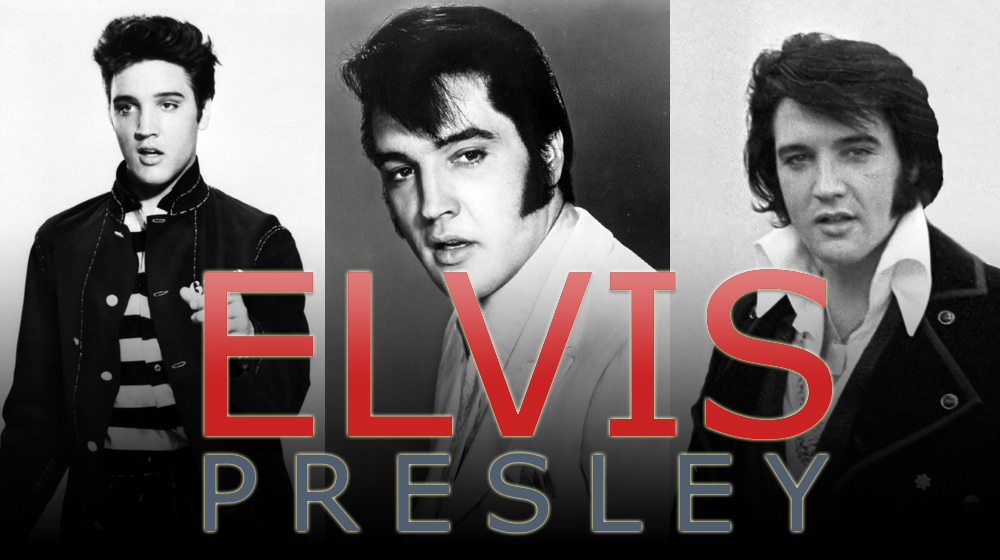 The film was a ridiculous farce highlighted by poor acting and bad writing.  If that wasn't enough, it was set in Florida but filmed in California.  No attempts were made to hide the geographical differences.

During filming, Presley was overweight.  Clever clothing hid his girth from the camera's lens.

The accompanying soundtrack was pedestrian and contained no songs of any note.  On the Billboard album chart, it stalled at number 40.

It must have wounded The King to be so far out of touch with prevailing trends.  He was irrelevant.

A decade earlier, he had changed the world.  Now, in 1967, he was nearly obsolete.

What went wrong?  That question can be answered in three words: Colonel Tom Parker. 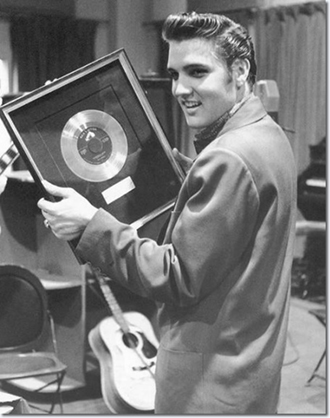 The one millionth record of Heartbreak hotel Presented to
Elvis Presley by RCA Victor April 14.
By Arbresha12 [CC BY-SA 4.0], from Wikimedia Commons

Elvis Presley was born on Jan. 8, 1935 in Tupelo, Mississippi.  He moved to Memphis, Tennessee when he was 13.

Presley was very close to his mother, Gladys Love Smith.  Growing up, Presley was teased for being a mamma's boy.

His father, Vernon Elvis Presley, was lazy and bounced from job to job.  When Elvis was three, Vernon served eight months in jail for altering a check.

Growing up, Presley and his family had little money and relied on government assistance as well as the kindness of relatives.

Presley's first public performance came in 1945.  He finished fifth in a talent contest held at the Mississippi-Alabama Fair.  For his next birthday, Presley received his first guitar.

Presley took guitar lessons from friends and acquaintances, but shyness kept him from performing.  Despite his love for all kinds of genres, he did quite poorly in his high school music classes.

By the time he was a senior, Presley had come into his own and gained confidence.  When he graduated from high school, the future "King of Rock and Roll" knew exactly what he wanted to do with his life.

Lore says Presley went to Sun Records to cut a record for his mother.  Since there were cheaper places to create vinyl records, he probably visited Sun Records to be discovered.

That eventually happened, but it took a while.

Presley made the founder of Sun Records, Sam Phillips, take note, but not enough to do anymore than write down his name.  From there, Presley endured numerous rejections and failed auditions.

Meanwhile, Phillips was on the lookout for a white performer who sang like a black singer.  He felt that such a talent "could make a billion dollars."

Having no luck finding such a talent, Philips called Presley into his studio.  The session was mediocre until Presley performed "That's All Right."

At that moment, "Elvis" was born.

Presley quickly became a regional star, but he had a problem.  His music was a blend of country and rhythm and blues, a style now called rockabilly.  At the time, he sounded "too black" for country radio stations and too country for rhythm and blues stations. 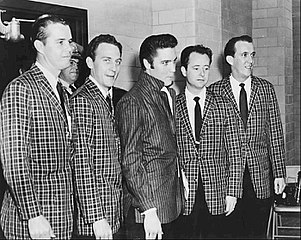 Photo of Elvis Presley with his backup group for many
years, The Jordanaires. The Jordanaires recorded,
toured and made television appearances with Elvis.
By Press Department, Capitol Records. While Elvis
was signed to RCA Victor, the Jordanaires made
recordings of their gospel music on their own, without Presley.
They produced some albums for Captiol over a long
period of time. (eBayfrontback) [Public domain],
via Wikimedia Commons

Parker said he was American, but he was actually Dutch and may have fled the Netherlands to avoid being a murder suspect.  His title of "colonel" was facetious and bestowed on him in an act of cronyism.

In November of 1955, RCA acquired Presley's recording contract for $40,000.  At the time of the deal, it was an unprecedented amount.

Presley made his first recordings for RCA in January of 1956.  The landmark "Heartbreak Hotel" was released on Jan. 27.  Three months later, it became his first number one single.

On March 2, Parker took over as Presley's manager.  Over the course of Presley's life, Parker's cut was anywhere from 25 to 50 percent.

Presley's first album was released on March 23.  The self-titled opus, with his name in pink and green lettering, and the black and white image of him enthusiastically playing the guitar, would later be copied by The Clash for their album London Calling.

In this debut, Presley had preserved the energy of black musicians while adding his own unique voice.  He also made the guitar the focus and not the piano.

Presley's debut album went to number one on the Billboard album chart.  It was the first rock and roll album to do so.

That spring, Presley appeared on national television and caused tremendous controversy with his gyrating hips.  His movements are considered tame when compared to what popular musicians do in the 21st century, but in 1956, such dancing was considered quite deviant.

In September, Presley appeared on the popular Ed Sullivan Show.  His initial appearance was watched by an audience of 60 million.  Presley was now the biggest star in the United States.

Presley's first film, Love Me Tender, hit theaters on Nov. 21.  The film was forgettable, but Presley's popularity made it a box office hit.

Presley finished 1956 with a jam session at Sun records.  Joining him in the studio were Carl Perkins and Jerry Lee Lewis.  Johnny Cash stopped by long enough to take a picture. 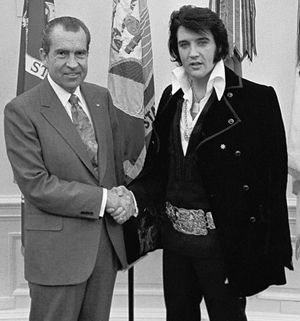 Elvis Presley meeting Richard Nixon. On December 21, 1970,
at his own request, Presley met then-President Richard Nixon
in the Oval Office of The White House. Elvis is on the right.
Waggishly, this picture is said to be 'of the two greatest
recording artists of the 20th century'. The Nixon Library &
Birthplace sells a number of souvenir items with this photo and
the caption, "The President & the King."
By Ollie Atkins, chief White House photographer at the time.
See ARC record. [Public domain], via Wikimedia Commons

Presley was drafted into military service on March 24, 1958.  While in the army, he was introduced to amphetamines, met Priscilla Beaulieu (who was 14 at the time), began a lifelong study of karate, and endeared himself to his fellow soldiers by buying televisions and extra sets of fatigues.

His record label had planned for his two-year army stint by slowly releasing a backlog of material.  While in the army, Presley enjoyed ten top 40 hits.  Those hits included "Wear My Ring Around Your Neck," "Hard Headed Woman," and "A Big Hunk o' Love."

After his honorable discharge in March of 1960, Presley settled into a successful but artistically vapid movie career.  Presley remade relatively cheap, formulaic movies.  Critics hated them, but they did well at the box office.

Presley wanted to make serious films, but his few attempts at legitimate cinema were poorly received (Flaming Star [1960] and Wild in the Country [1961]).

This, and Parker's cajoling, forced Presley into a grueling schedule of making three subpar films a year which he did in 1962 and then from 1964 through 1969.  In total, he made 27 films in the decade of the sixties.

Instead of releasing studio albums, Presley released soundtracks.  The quality of these works steadily diminished.  Worst of all, Presley knew it.

By the time Clambake was released in 1967, Elvis was something of a joke.

In December of 1968, Presley launched a comeback with his television special, Elvis (commonly referred to as '68 Comeback Special).  Over the next couple of years, Presley scored hits with classics like "In the Ghetto," "Suspicious Minds," and "Kentucky Rain."

In the 1970s, until his death on Aug. 16, 1977, Presley's career produced few highlights.  One of them was his television special, Aloha from Hawaii.  It was the first global broadcast and attracted robust viewership.  Presley was also successful in the country and adult contemporary markets.

Conversely, the 1970s were a time when Elvis experienced a bitter divorce, failed romantic relationships, and a servere deterioration of his health.

While he publicly chastised drug users, Presley privately took copious amounts of prescribed pharmaceuticals.  He suffered overdoses and occasionally performed stoned.  His drug use either caused, or magnified, a plethora of infirmities.

One can argue that Presley's drug use was caused, either directly or indirectly, by Parker.  The drugs made Presley pliable to Parker's intense commercial aspirations and helped subdue the pain of being a sellout.

Presley's body eventually gave out on Aug. 16, 1977.  He was found in the fetal position on the floor of one of his bathrooms at his estate, Graceland.   He was pronounced dead at a nearby hospital at the age of 42.

Cause of death was obscured by large amounts of drugs in his system.  It's safe to say, the 14 types of drugs found during the autopsy were not beneficial to his enlarged heart. 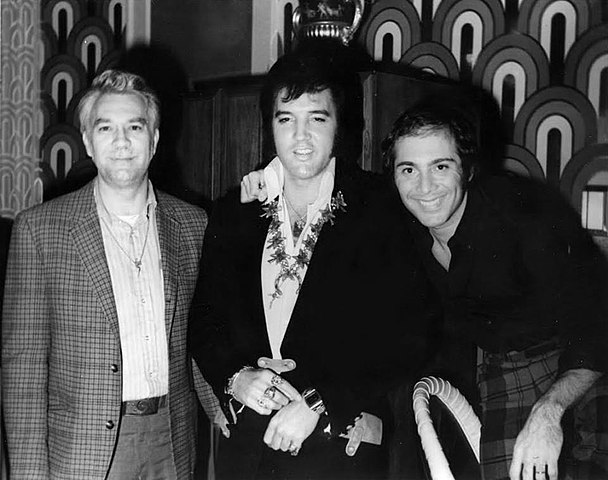 Photo of Elvis Presley with close friends and collaborators Bill Porter and Paul Anka.
The photo was taken on August 5, 1972 at the Las Vegas Hilton. Bill Porter was a Nashville sound
engineer who worked on many of Presley's recordings in the 1960s.
By Press Department, Capitol Records (eBay) [Public domain], via Wikimedia Commons

While Elvis struggled for relevancy during the last decade of his life, he still earned and deserves the honorific of "King of Rock and Roll."

He's the best selling solo artist of all-time.  It's estimated that he's sold anywhere from 600 million to a billion albums.

Elvis changed the world and influenced generations of musicians.  He's one of the most significant cultural icons of the 20th century.

Elvis Presley once worked as a truck driver.

The film Love Me Tender was originally called The Reno Brothers.  The title was changed to capitalize on Elvis Presley's hit single of the same name.

Elvis Presley once performed with a pistol in his waistband after receiving what the FBI believed was a credible death threat.

All three of Elvis Presley's competitive Grammy Awards are for gospel recordings.