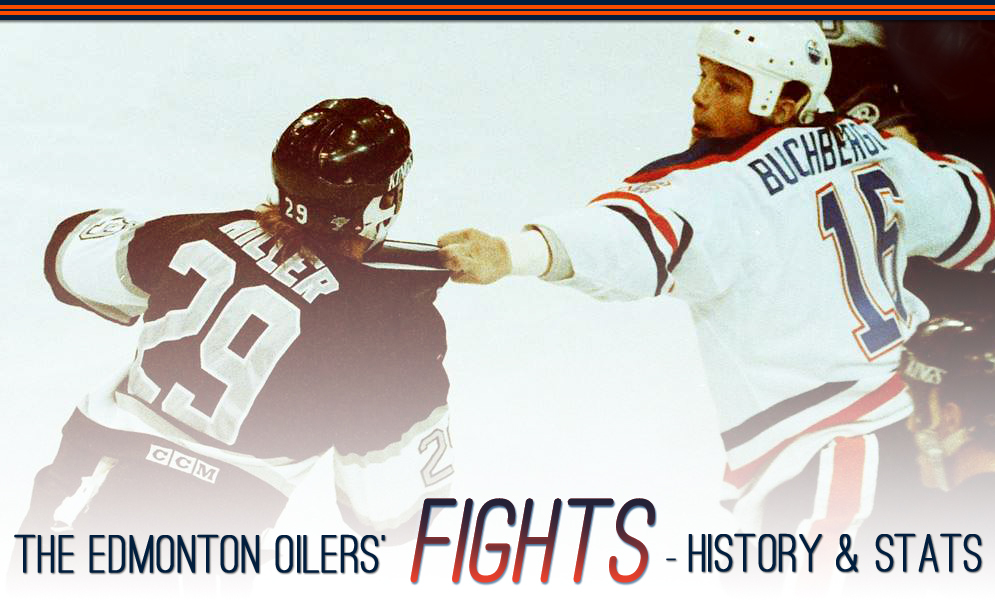 Do you want to see a fight at an Edmonton Oilers game?

If you do, go to a game in February…in Calgary… make sure you're in your seats during the second period… have Kelly Buchberger in the Oilers' lineup… put Ian Laperriere on the other team… and have it be the 1987-1988 season.

If you could attend such a game, you'd have some pretty awesome Edmonton Oilers tickets.

That's not the only nugget of puck pugilism we want to share.

Below, we look at the Edmonton Oilers and their rich history of dropping the gloves.

Thanks to our friends at hockeyfights.com, we've compiled lists highlighting the history of the Oilers and their hockey fights.

With the NHL's recent rule changes, it's no surprise that the 1980s and 1990s dominate the list of seasons with the most Oilers fights.  Only one campaign from the 21st century makes the rundown. 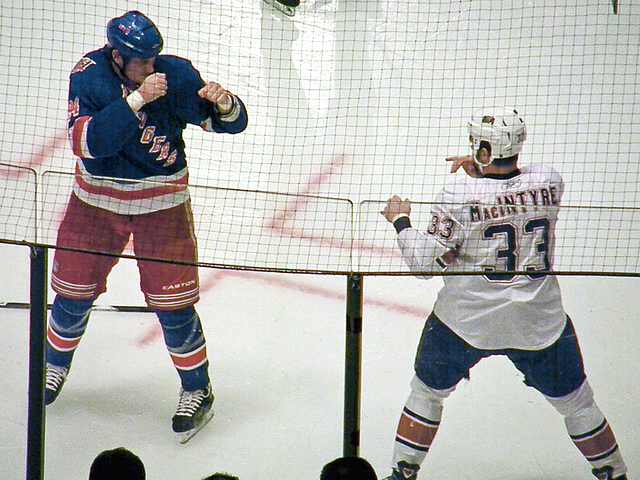 Seasons with the Fewest Oilers Fights

That explains why the Oilers duked it out just 13 times in 2012-2013.  In the other lock-out shortened season, the Oilers turned up their aggression.  They averaged nearly a fight a night.

Fighting and the Stanley Cup

The NHL officially recognizes the Edmonton Oilers of 1983 through 1990 as a dynasty.  During that era, the franchise won five Stanley Cups.  Besides winning sports' toughest trophy, the Oilers also posted a franchise-best 94 fights. 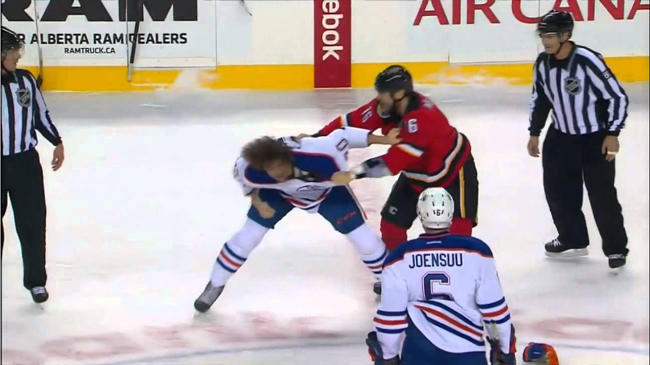 Edmonton Oilers like to fight in the middle of the season—December, January, and February.  They seem to keep their gloves on in autumn and spring.

It's completely understandable that April has a low number brawls.  The regular season ends in the middle of April.

Months with the Most Oilers Fights

The 1980s are responsible for six months with the most Edmonton Oilers fights.  The 1990s were responsible for five, and the 21st century has two entries including one of four months where the Oilers tussled twenty or more times. 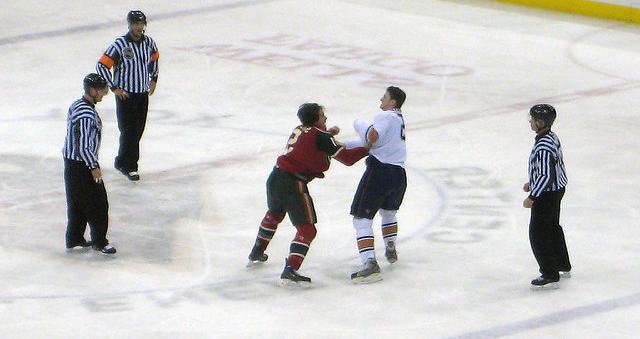 Surprisingly, Oilers tend to resort to fisticuffs in the middle of the game instead of the end.

You'd think the waning moments of a contest, when the outcome has been decided, is when Oilers would throw down the most, but that doesn't appear to be the case.

On Jan. 19, 1980 the Edmonton Oilers fought the Pittsburgh Penguins nine times during a single regular season game.  Oilers hit Penguins and the back of the net.  They picked up the win, 5-2.

The two games where the Oilers fought eight times were both losses.  The Oilers fell 2-4 to the Kings and 2-5 to the Flames.

Oilers with the Most Fights, All-Time

Kelly Buchberger played for the Edmonton Oilers from 1987 to 1999.  He, and another member of the top ten, Marty McSorley, were the last players remaining from the Oilers five Stanley Cup Championship teams.

Speaking of champions, Mark Messier's 39 fights makes him the first Oiler cut from the following list.  If the following list included all 217 Oilers who threw fists, near the bottom, you'd find Wayne Gretzky.  While an Oiler, “The Great One” fought twice. 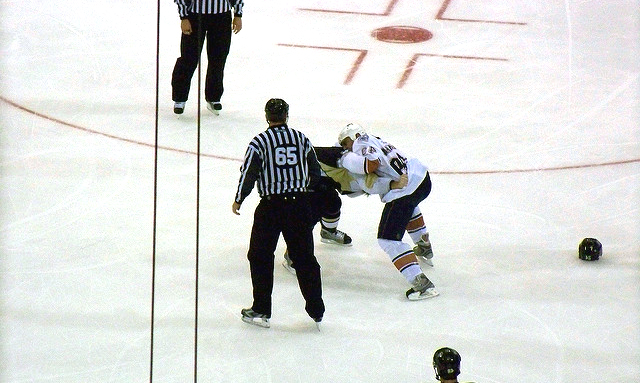 Opposing Players with Most Fights Against Oilers, All-Time

Most Oilers Fights in a Single Regular Season

In 1985-1986, McSorley fought 25 times in 59 games.  He spent 265 minutes off the ice thinking about the penalties he committed and finished the regular season with two more fights than points.

The Calgary Flames are rude guests.  When they visit Rogers Place, they like to turn the ice rink into a boxing ring.  One of their 122 fights in Edmonton came when the franchise was based in Atlanta.

About 300 kilometers separate Edmonton and Calgary.  This proximity breeds contempt.  Since 1979, the two franchises have duked it out more than 250 times.  One-hundred and thirty of those fracases happened in Calgary.

Most of the Oilers' melees with the Arizona Coyotes came when the franchise was in Winnipeg.  The franchise that's currently in Winnipeg used to be in Atlanta and nicknamed the “Thrashers.”  Edmonton has clashed with that franchise just four times.

The Best Sports Bars in Canada