Weezer tickets can be purchased here where you'll discover a huge choice of affordable concert tickets.

Booking your Weezer tickets here is easy and secure. Either choose the Weezer concert above to purchase them online, or call us at 1-866-837-0608.

You can search the times and dates in the tour schedule above to find the specific Weezer concert you want to attend.

Click on the red 'View Tickets' button to see all the available seats for that Weezer show, along with an interactive seating chart that will help you locate the best seats for your price.

You'll have to choose how many tickets you want to purchase for the Weezer concert tour, and then you'll be brought to our secure checkout.

Weezer ticket prices may be above or below face value and can fluctuate. You'll find cheap Weezer tickets here at relatively affordable prices.

Shipping/Delivery Information for Weezer Tickets:
You can choose either standard or express delivery and you can specify special delivery instructions if necessary. Your live music concert tickets will be shipped to you using Federal Express.

Also, some tickets to the Weezer tour may be available for immediate download as e-tickets, or electronic tickets, that you can print right from your device.

Driving beats. Memorable guitar riffs. Ironic lyrics. Rivers Cuomo. Those are all things you’ll experience at a Weezer concert. The legendary alternative band is spectacular live—if for nothing else than their more than two decades of hits. If a Weezer tour comes to your town you’ve got to drop everything and make sure you’re there.

Before you drop everything, you’ll need to pick up Weezer tickets. You can do that right here at Clickitticket. We have a huge selection of concert seats to every Weezer show. It doesn’t matter if they’re playing in New York, Los Angeles, or Red Rocks, Clickitticket can get you into the venue and close enough to see Patrick Wilson wink at you.

What Genre Is Weezer?

Weezer is a quintessential alternative rock band. If aliens landed and asked what alternative music sounds like, Weezer is the band you’d probably play for them first.

Weezer’s music, at one time or another, has been described as power rock, power pop, indie rock, and emo.

Weezer: Where Are They From?

Which Weezer Album Is Buddy Holly On?

Weezer’s most popular song is “Buddy Holly.” You’ll find it on their 1994 self-titled debut album.

The award-winning video to “Buddy Holly,” the one that interpolates scenes from the 1970s sitcom Happy Days, was well-received and earned the band national recognition.

Which Weezer Album Is The Best?

Weezer’s debut LP is the bestselling album of their career and generally considered one of the best works of the 1990s.

When their sophomore effort, Pinkerton, dropped in 1996 it was excoriated by critics and fans. Yet despite its humble beginnings it too has gone on to be recognized as one of the greatest albums of the decade.

Over the years, Weezer has worked with a number of big name producers including Ric Ocasek, Rick Rubin, Garret "Jacknife" Lee, Dr. Luke, and Butch Walker.

Cuomo has written entire albums like Maladroit (2002) and Make Believe (2005). Whereas on Raditude (2009) and Hurley (2010), Cuomo co-wrote nearly every track with either a bandmate or a third party. 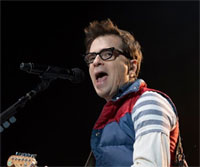