Twenty One Pilots tickets can be purchased here where you'll discover a gigantic selection of affordable concert tickets.

How to Buy Twenty One Pilots Tour Tickets Here

You can search the times and dates in the tour schedule above to find the specific Twenty One Pilots concert you want to attend.

Click on the red 'View Tickets' button to see all the available seats for that Twenty One Pilots show, along with an interactive seating chart that will help you locate the best seats for your price.

You'll have to choose how many tickets you want to purchase for the Twenty One Pilots concert tour, and then you'll be brought to our secure checkout.

Shipping/Delivery Information for Twenty One Pilots Tickets:
You can choose either standard or express delivery and you can specify special delivery instructions if necessary. Your live music concert tickets will be shipped to you using Federal Express.

Also, some tickets to the Twenty One Pilots tour may be available for immediate download as e-tickets, or electronic tickets, that you can print right from your device.

About Twenty One Pilots

The music of Twenty One Pilots is catchy and cerebral. The band takes alternative music, adds a healthy dose of rap, and then mixes it with elements of hip hop, emo, reggae, rock, and electropop.

You could probably slide them into one of a half dozen genres but fans have created a new subgenre to describe their dynamic music. This new subgenre is called “Schizophrenic Pop” or “Schizoid Pop.”

The group’s lyrics can be considered poetry. They frequently draw on Christian themes and allude to God; however, Twenty One Pilots is not a Christian band. Their mantra is “to make people think.”

Where Can I Find Twenty One Pilots Tickets?

Twenty One Pilots is a duo comprised of singer Tyler Joseph and drummer Josh Dunn. Their name comes from the Arthur Miller play, All My Sons.

The band formed in 2008 in Columbus, Ohio as a trio. Joseph was originally joined by Nick Thomas and Chris Salih, but they both left the fray in 2011. Later that year, Dunn joined the band.

Twenty One Pilots released their self-titled, independent album in December of 2009. Their sophomore indie platter dropped in July of 2011. Neither work charted.

In 2012, 21 Pilots signed a major label deal with Fueled by Ramen, a subsidiary of Atlantic Records. They announced their signing at a Twenty One Pilots concert held in Columbus, Ohio.

Are There Any Twenty One Pilots Tickets Left?

There are always Twenty One Pilots tickets left at Clickitticket—their concerts are never sold out.  You’ll receive your tickets via FedEx and they’ll be in your hands long before Tyler and Josh take the stage.  Our checkout process is easy, fast, and completely safe.  Best of all, Clickitticket has a 100% satisfaction guarantee.  So, to answer your question, there are definitely Twenty One Pilots tickets left!

The following year, the duo released Vessel. Their first studio album on a major record label stalled at #58 on the Billboard 200.

In 2014, Twenty One Pilots circulated their second studio album since signing with Fueled by Ramen. Called Blurryface, the opus debuted at number one after selling nearly 150,000 units during its opening week of sales.

Thanks to their energetic and emotional concerts, Twenty One Pilots tickets are in high demand.

Two reasons why their live shows are so popular is they are the only two musicians performing and Dunn plays his drums upstage (usually drummers perform in the back, far away from the audience).

These factors expose Joseph and Dunn to their fans. This exposure inspires them to put on the best show possible.

Over the years, Twenty One Pilots has toured with, or opened for, Fall Out Boy, Neon Trees, Echosmith, Walk the Moon, and Finish Ticket. They’ve also performed on Conan, Late Night with Seth Meyers, the MTV Movie Awards, Lollapalooza, and Bonnaroo. 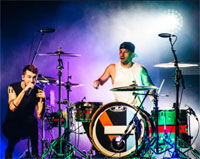