Booking your Trey Anastasio tickets here is easy and secure. Either choose the Trey Anastasio concert above to purchase them online, or call us at 1-866-837-0608.

You can search the times and dates in the tour schedule above to find the specific Trey Anastasio concert you want to attend.

Click on the red 'View Tickets' button to see all the available seats for that Trey Anastasio show, along with an interactive seating chart that will help you locate the best seats for your price.

You'll have to choose how many tickets you want to purchase for the Trey Anastasio concert tour, and then you'll be brought to our secure checkout.

Shipping/Delivery Information for Trey Anastasio Tickets:
You can choose either standard or express delivery and you can specify special delivery instructions if necessary. Your live music concert tickets will be shipped to you using Federal Express.

Also, some tickets to the Trey Anastasio tour may be available for immediate download as e-tickets, or electronic tickets, that you can print right from your device.

Additionally, Anastasio has participated in a number of projects/supergroups including Oysterhead, Dave Matthews & Friends, Bivouac Jaun, SerialPod, and Phil Lesh and Friends.  He’s also performed with the Grateful Dead.

Background
Anastasio was born Sept. 30, 1964 in Fort Wort, Texas but moved to New Jersey when he was three.  His father was an executive and his mother was editor of Sesame Street Magazine.

Anastasio graduated from the Taft School, located in Connecticut, and then attended the University of Vermont and Goddard College (also in Vermont).

Phish
It was during his time at the University of Vermont that he formed Phish.  In fact, Phish played their first gig on Dec. 2, 1983 at an on-campus cafeteria.

Phish went on to rival the Grateful Dead as the world’s greatest jam band.  The group was known for never playing the same setlist twice, their Halloween musical costumes, and their eight-hour set that rang in the 21st century.

Phish broke up in 2004 and reunited in 2009.  While the band has sold Phish tickets all over the world, they’ve only moved a few million albums and have never charted a single on the Billboard Hot 100.

It refers to any group of musicians who backed Anastasio in the late 1990s and early 2000s.  Then in 2006, the group 70 Volt Parade was renamed The Trey Anastasio Band.

Compositions
While at Goddard, Anastasio wrote his famous song cycle, The Man Who Stepped into Yesterday.  Phish recorded the “concept album,” but it was never officially released.

Anastasio has written more than 150 Phish songs as well as several classical-style pieces.  One of those pieces, “Time Turns Elastic,” has been performed by the Baltimore Symphony Orchestra and the New York Philharmonic.

Anastasio co-wrote the music to the Broadway musical Hands on a Hardbody.  Although the show ran for just 56 performances, Anastasio picked up a Tony Award nomination for Best Original Score.

Drug Addiction
On Dec. 15, 2006 Anastasio was pulled over in Whitehall, New York for erratic driving.  He was then arrested for possession of heroin and illegal prescription drugs.

The felony drug charges forced Anastasio to spend 14 months rehabbing and performing community service.  When it was all said and done, the charges were reduced to a misdemeanor and Anastasio emerged sober. 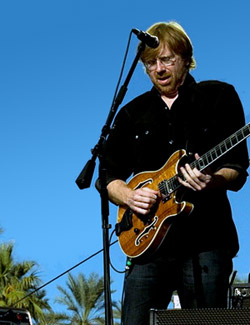