Tool tickets can be purchased here where you'll discover a huge choice of affordable concert tickets.

Booking your Tool tickets here is easy and secure. Either choose the Tool concert above to purchase them online, or call us at 1-866-837-0608.

You can search the times and dates in the tour schedule above to find the specific Tool concert you want to attend.

Click on the red 'View Tickets' button to see all the available seats for that Tool show, along with an interactive seating chart that will help you locate the best seats for your price.

You'll have to choose how many tickets you want to purchase for the Tool concert tour, and then you'll be brought to our secure checkout.

Tool ticket prices may be above or below face value and can fluctuate. You'll find cheap Tool tickets here at relatively affordable prices.

Shipping/Delivery Information for Tool Tickets:
You can choose either standard or express delivery and you can specify special delivery instructions if necessary. Your live music concert tickets will be shipped to you using Federal Express.

Also, some tickets to the Tool tour may be available for immediate download as e-tickets, or electronic tickets, that you can print right from your device.

Keenan and Carey perform on platforms located in the back on the stage while Jones and Chancellor are positioned up front and slightly off to the sides. No followspots are used and lighting is designed to direct attention away from the band and towards several large screens.

These screens display video loops. The moving images are not timed to the music. Instead, they’re intended to be free-flowing and interchangeable, thus creating a unique experience for the audience every time they come to a Tool show.

Jones is part of the team that helped supply the band with over six hours of footage. The guitarist is also the driving force behind the band’s album covers and art work. His packaging for 10,000 Days earned him a 2006 Grammy Award.

The band’s video to “Prison Sex,” a song about child abuse, was banned by MTV after only a few airings. Furthermore, their song “Stinkfist” was re-titled “Track 1” by MTV due to its licentious connotations.

Tool often expresses their distaste for this type of censorship. One of the band’s most notable remonstrations was their first music video, "Hush." In the video, the band members appear naked with parental advisory stickers covering their naughty parts.

Besides being a serious band that tackles serious issues, Tool also has a cheeky sense of humor that seems to continually reveal itself on April Fool’s Day. In 1997, the band joked that three of them had been critically injured in a bus accident. Needless to say, the prank didn’t go over very well.

Due to the backlash they received the band apologized and promised no more practical jokes. However, in 2005 the band announced that Maynard had found religion and was leaving the band. The joke was so convincing it prompted MTV’s Kurt Loder to contact the band seeking confirmation.

As a band, Tool had it figured out from the start. After all, they signed with a record company just three months after forming. Perhaps this rapid ascension is due to the band having such a clear purpose.

Keen articulated the band’s intentions the best when he said, “Tool is exactly what it sounds like… It's a wrench.... we are... your tool; use us as a catalyst in your process of finding out whatever it is you need to find out, or whatever it is you're trying to achieve." 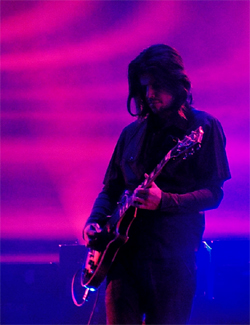