Booking your Todd Rundgren tickets here is easy and secure. Either choose the Todd Rundgren concert above to purchase them online, or call us at 1-866-837-0608.

You can search the times and dates in the tour schedule above to find the specific Todd Rundgren concert you want to attend.

Click on the red 'View Tickets' button to see all the available seats for that Todd Rundgren show, along with an interactive seating chart that will help you locate the best seats for your price.

You'll have to choose how many tickets you want to purchase for the Todd Rundgren concert tour, and then you'll be brought to our secure checkout.

Shipping/Delivery Information for Todd Rundgren Tickets:
You can choose either standard or express delivery and you can specify special delivery instructions if necessary. Your live music concert tickets will be shipped to you using Federal Express.

Also, some tickets to the Todd Rundgren tour may be available for immediate download as e-tickets, or electronic tickets, that you can print right from your device.

Todd Rundgren is a musical genius and polymath. He can do it all. He can sing, play the guitar, write songs, produce albums, and engineer. Rundgren isn’t one of those talents that has just done all of those things in passing; he’s done them all with much aplomb and tremendous success. If Rundgren had wanted to he could have picked one and made a career at it.

Rundgren wrote and recorded the classic rock staples “Hello It’s Me” and “I Saw the Light.” If you’ve ever been to a sports event then you’ve heard Rundgren’s “Bang the Drum All Day.” Due to its lively tempo and celebratory nature, the song has become something of an anthem for free spirits and party lovers.

Rundgren has produced the albums Straight Up by Badfinger, We’re an American Band by Grand Funk Railroad, and Skylarking by XTC. Rundgren also produced Bat Out of Hell by Meat Loaf, a highly acclaim record and one of the bestselling albums of all-time.

Rundgren has fronted several bands during his career including Nazz, Utopia, and The New Cars. While Nazz was more of a Rundgren solo project, Utopia (which has been known as “Todd Rundgren’s Utopia”) is a collaborative effort.

Frustrated by the way his early recordings sounded, Rundgren taught himself the technical side of the studio. He went on to mix and engineer the Band’s third studio album, Stage Fright; a live album for Paul Butterfield Blues Band; and Jesse Winchester’s debut record. Of course, Rundgren engineered many of the albums he produced.

Rundgren is also known for being difficult. He can be very sarcastic and aloof. It also doesn’t help that he works hard, hustles, and creatively solves problem. Those aren’t exactly the traits you associate with mercurial music types.

For example, the members of XTC did not enjoy working with Rundgren but they praised his musical genius and really appreciated the final product. Record companies love Rundgren because he makes albums on time and under budget.

Rundgren has performed all over the world. That includes collecting Todd Rundgren tickets at the Hammersmith Apollo in England, the 2010 Sydney Festival in Australia, and the 2010 “Beatles Celebration” at the Hollywood Bowl. In 1992, Rundgren joined Ringo Starr & His All-Starr Band. He toured with Ringo again in 1999 and 2012 through 2015.

Like most legendary rock stars, Rundgren is also known for being involved in a sordid love triangle. During the 1970s, Rundgren had an ongoing relationship with model Bebe Buell. In 1977, Buell gave birth to a daughter (future actress Liv Tyler). The biological father was Steven Tyler of Aerosmith. Buell wanted to keep her daughter away from Tyler, who was addicted to drugs at the time, and claimed Rundgren was the father.

Even though Rundgren knew the child might not be his, and he ended his relationship with Buell shortly after she gave birth, he stepped up and fulfilled the role of father—for example, he put her through private school. The child was informed of her real father when she was nine, but continued her close relationship with Rundgren. 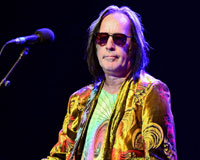