Booking your Toby Keith tickets here is easy and secure. Either choose the Toby Keith concert above to purchase them online, or call us at 1-866-837-0608.

You can search the times and dates in the tour schedule above to find the specific Toby Keith concert you want to attend.

Click on the red 'View Tickets' button to see all the available seats for that Toby Keith show, along with an interactive seating chart that will help you locate the best seats for your price.

You'll have to choose how many tickets you want to purchase for the Toby Keith concert tour, and then you'll be brought to our secure checkout.

Shipping/Delivery Information for Toby Keith Tickets:
You can choose either standard or express delivery and you can specify special delivery instructions if necessary. Your live music concert tickets will be shipped to you using Federal Express.

Also, some tickets to the Toby Keith tour may be available for immediate download as e-tickets, or electronic tickets, that you can print right from your device.

Country music superstar Toby Keith owes his career to a flight attendant. It was the early 1990's and Keith, in his early 30's, was on the verge of giving up on the music business. Unbeknownst to him, a flight attendant, and fan of his music, passed along one of his demo tapes to a record executive that was on a flight she was working.

The executive liked Keith's sound and went to hear him perform live. The executive was so enamored by Keith that he signed him to a record deal. Keith's debut single was released in February of 1993. It was called "Should've Been A Cowboy" and it went to the top of the country singles chart. Meanwhile, his self-titled debut album went on to be certified platinum.

Keith was born in Clinton, Oklahoma in 1961, but his family moved to Moore, Oklahoma when he was still quite young. During the summers he worked at his grandmother's restaurant in Fort Moore, Arkansas. There Keith became interested in the musicians playing on the bandstand and before long he was playing with them. After high school, Keith worked as a derrick hand in Oklahoma's oil fields and also played semi-professional football for the Oklahoma City Drillers.

Keith has acted in two films, Broken Bridges (2005) and Beer For My Horses (2008). He wrote the script for Beer For My Horses, a movie based on his 2003 hit of the same name. It was a song he recorded with legend Willie Nelson.

Keith has also lent his name to a chain of restaurants called "Toby Keith's I Love This Bar & Grill" and he has his own clothing line called "TK Steelman." Keith is an ardent supporter of the U.S. Military and has made several trips to the Middle East to entertain U.S. troops. 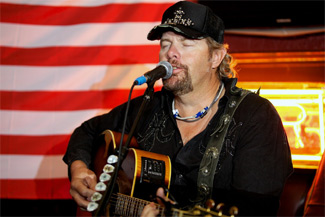