Booking your Thomas Rhett tickets here is easy and secure. Either choose the Thomas Rhett concert above to purchase them online, or call us at 1-866-837-0608.

You can search the times and dates in the tour schedule above to find the specific Thomas Rhett concert you want to attend.

Click on the red 'View Tickets' button to see all the available seats for that Thomas Rhett show, along with an interactive seating chart that will help you locate the best seats for your price.

You'll have to choose how many tickets you want to purchase for the Thomas Rhett concert tour, and then you'll be brought to our secure checkout.

Shipping/Delivery Information for Thomas Rhett Tickets:
You can choose either standard or express delivery and you can specify special delivery instructions if necessary. Your live music concert tickets will be shipped to you using Federal Express.

Also, some tickets to the Thomas Rhett tour may be available for immediate download as e-tickets, or electronic tickets, that you can print right from your device.

When you attend a Thomas Rhett concert be prepared to smile, sing along, and have a whole bunch of fun. Whether you’re in the front row, or the last, you’ll marvel at his vocals, energy, and star power.

With the stage lights flashing, the crowd cheering, and the beat thumping your chest, you should expect just about anything. Rhett is not afraid to throw in a cover song or invite one of his famous buddies on stage for a duet.

Thomas Rhett was born on March 30, 1990 in Valdosta, Georgia. He attended Lipscomb University but dropped out to pursue music.

The success of that song led Rhett to sign a recording contract. His first album, It Goes Like This, dropped in 2013. He followed that up in 2015 with Tangled Up. Both releases peaked at number two on the country charts and number six on the Billboard 200.

In 2017, Rhett experienced his first number one platter, Life Changes.

Popular Rhett songs include “It Goes Like This,” “Get Me Some of That,” “Crash and Burn,” “Die a Happy Man,” “T-Shirt,” and “Unforgettable.”

In 2018, Thomas Rhett embarked on his Life Changes Tour after the name for his latest album and he is headlining the tour. 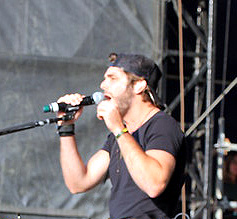