The Eagles tickets can be purchased here where you'll discover a huge choice of affordable concert tickets.

Booking your The Eagles tickets here is easy and secure. Either choose the The Eagles concert above to purchase them online, or call us at 1-866-837-0608.

How to Buy The Eagles Tour Tickets Here

You can search the times and dates in the tour schedule above to find the specific The Eagles concert you want to attend.

Click on the red 'View Tickets' button to see all the available seats for that The Eagles show, along with an interactive seating chart that will help you locate the best seats for your price.

You'll have to choose how many tickets you want to purchase for the The Eagles concert tour, and then you'll be brought to our secure checkout.

Shipping/Delivery Information for The Eagles Tickets:
You can choose either standard or express delivery and you can specify special delivery instructions if necessary. Your live music concert tickets will be shipped to you using Federal Express.

Also, some tickets to the The Eagles tour may be available for immediate download as e-tickets, or electronic tickets, that you can print right from your device.

Although Joe Walsh, and Timothy B. Schmit The original Eagles line up found Glenn Frey, Don Henley, Bernie Leadon, and Randy Meisner coming together to back up Linda Ronstadt. 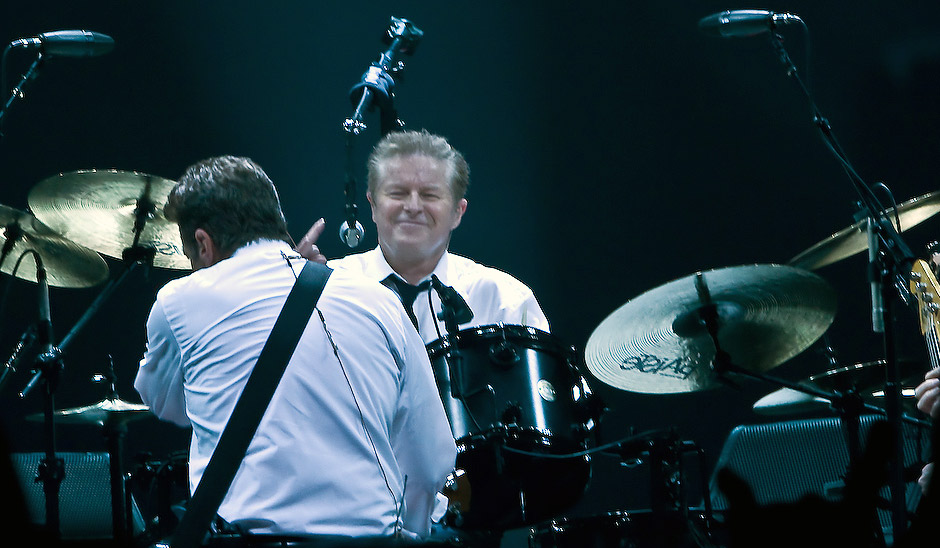 After a gig and an album as Ronstadt's band, the foursome landed a deal at Asylum Records, a new label helmed by David Geffen. Their eponymous debut in 1972 yielded the quick hit "Take It Easy" which was written by Frey along with his neighbor at the time, a young Jackson Browne.

The single almost made the Billboard Top 10, falling shy at number 12. The two follow-up tracks, "Witchy Woman" and "Peaceful Easy Feeling," both only made it into the top 25.

The Eagles' next outing was Desperado. Frey and Henley co-wrote the bulk of the tunes together, the title track and the hit single "Tequila Sunrise" among them.

The successful pairing of Frey and Henley claimed the spotlight while Leadon and Meisner sank slowly into the shadows.

Wanting to move more toward a rock sound rather than their established country-tinged style, the Eagles brought in Don Felder to contribute slide guitar to On the Border, their third record. Felder made such an impact that he was asked to join the band. Two tunes from that collection -- "Best of My Love" and "Already Gone" -- were bonafide hits that would go on to become classic songs.

Keeping their songwriting partnership in place on 1975's One of These Nights, Frey and Henley crafted more great works. The single "Lyin Eyes" brought home a Grammy and the title track topped the charts. Frey has cited "One of These Nights" as his favorite Eagles song.

Leadon resigned from the band just before they went on tour to support the release because Felder had been handed most of the guitar parts that Leadon had previously played. Tensions were so high that Leadon actually dumped a beer on Frey's head as his way of quitting. Joe Walsh was brought in posthaste to take over.

Their Greatest Hits (1971 - 1975) was released in 1976. The set would later earn the title of the best-selling record of all time, having sold more than 42 million copies around the world.

Hotel California also came out that year. Two number one hits emerged in the title track and "New Kid in Town." Other tracks also did well on the charts.

At the end of the Hotel California tour, Meisner left the band. Timothy B. Schmit, who replaced Meisner in Poco, stepped in once again to fill his shoes.

With a new formation all set, the Eagles entered the studio in 1977 for a two-year process of recording what was supposed to be a double album. The Long Run had only enough songs for one album, but their fifth chart-topping single was among them, "Heartache Tonight."

The "Long Night at Wrong Beach" happened at a show in Long Beach, Calif. on July 30, 1980. Tempers flared; egos collided.

The band's between-song banter was filled with physical threats. The Eagles' day in the sun was at its dusk.

Still owing the label a live record recorded during the tour, Frey and Henley brought in producer Bill Szymczyk who worked with them on separate sides of the country by sending mixes via Federal Express for approval.

Various solo projects ensued upon the Eagles' break up, some more successful than others. Frey even announced in 1994 at their first reunited performance that they'd never officially disbanded.

To play on the irony even further, they named their comeback record Hell Freezes Over because Henley repeatedly claimed that the band would reunite only "when hell freezes over."

The reunion was a smashing success, yielding a hit single and sales of over six million units. The tour also did well. All seven current and former Eagles even played a few songs together at their induction into the Rock and Roll Hall of Fame in 1998.

Leadon and Meisner, however, have not been a part of the subsequent tours.

After Felder was fired in 2001, he filed a lawsuit against the band, Frey, and Henley claiming that Frey and Henley demanded "a higher percentage of the band's profits" than the others even though equal splits had always been the norm.

A counter-suit followed which led to an out-of-court settlement.

A new greatest hits album came in 2003, followed by Long Road Out of Eden in 2007. The latter was their first set of new material in almost 30 years. Eden sold over seven million copies and won the band their fifth Grammy Award despite Henley saying it would mostly likely be their last.

The Eagles continued touring in 2008 and 2009, covering not only North American, but Europe and Asia/Pacific, as well.

For 2010, the group joined forces with Keith Urban and the Dixie Chicks to do a massive stadium tour across North America. And in 2018 The Eagles are on the road again with the “An Evening with the Eagles” tour 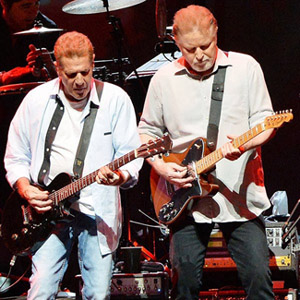