The Avett Brothers Vancouver tickets can be purchased here where you'll find a huge selection of concert tour tickets.

How to Buy The Avett Brothers Vancouver, BC Tickets Here

Click on the red 'View Tickets' button above to see all the available tickets for that Queen Elizabeth Theatre - Vancouver concert, along with an interactive seating chart that will help you locate the best seats for your price. After you choose how many Queen Elizabeth Theatre - Vancouver tickets you want, you'll be brought to our secure checkout to finalize your The Avett Brothers Vancouver concert tickets purchase.

About Our The Avett Brothers Vancouver, BC Ticket Prices

The Avett Brothers Ticket Shipping/Delivery Information:
You can choose either standard or express delivery. There may also be electronic The Avett Brothers Vancouver May 14, 2020 tickets (or e-tickets) available for immediate download. Otherwise, tickets are shipped with Federal Express.

Other Upcoming Concerts in Vancouver, BC

About The Avett Brothers

It’s easier to list the genres The Avett Brothers don’t draw inspiration from then it is to list the ones from which they do. If we’re forced to describe their music we’ll say they perform a mature and sophisticated brand of folk rock.

Their lyrics are introspective, sagacious, and soulful.

Their melodies are memorable but complex.

Their instrumentations are more folk and country than rock and pop. They are also very fond of performing acoustically.

They have a musical sensibility that makes them bookable on late night talk shows, the Grammys, and NPR.

Although they have their own distinct sound, The Avett Brothers have been compared to acts like The Head and the Heart, Old Crow Medicine Show, and Mumford & Sons. Another way to think of them is a combination of Phish, Kings of Leon, and Vince Gill.

As of 2014, The Avett Brothers have released eight studio albums and four EPs. Only their last three studio albums—I and Love and You (2009), The Carpenter (2012), Magpie and the Dandelion (2013)—have found success on the charts.

Frequently Asked Questions About The Avett Brothers Vancouver, BC Tickets 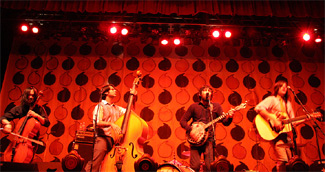