The 1975 Austin tickets can be purchased here where you'll find a fantastic selection of concert tour tickets.

Our The 1975 Austin 4/29/20 ticket prices are often cheaper than the rest, our checkout and servers are secure, and all The 1975 Germania Insurance Amphitheater tickets are 100% guaranteed.

Click on the red 'View Tickets' button above to see all the available tickets for that Germania Insurance Amphitheater concert, along with an interactive seating chart that will help you locate the best seats for your price. After you choose how many Germania Insurance Amphitheater tickets you want, you'll be brought to our secure checkout to finalize your The 1975 Austin concert tickets purchase.

About Our The 1975 Austin, TX Ticket Prices

The 1975 Ticket Shipping/Delivery Information:
You can choose either standard or express delivery. There may also be electronic The 1975 Austin April 29, 2020 tickets (or e-tickets) available for immediate download. Otherwise, tickets are shipped with Federal Express.

Other Upcoming Concerts in Austin, Texas

The 1975, a British alternative rock band, is an energetic and engaging live act. A 1975 concert is made even more enjoyable by the band’s deep respect and admiration for their fans.

The 1975 tours often. If their route comes close to your domicile, you need to make every effort to see them. Yet, to see them live you’ll need The 1975 tickets. You can get all your 1975 tickets right here at Clickitticket.

The 1975 is an alternative rock band with a bit of pop and R&B thrown in. Their sound is reminiscent of The Neighbourhood, Bad Suns, Bastille, Arctic Monkeys, and Ed Sheeran.

Their self-titled debut album dropped in 2013. It went to the top of the album charts in the U.K. but stalled at #28 in the States.

As we alluded to earlier, The 1975 are from England. Specifically, the band formed at the Wilmslow High School in Wilmslow, Cheshire just south of Manchester.

Before settling on The 1975, the band used a variety of other appellations including “Talkhouse,” “The Slowdown,” and “Drive Like I Do.”

The band eventually selected “The 1975” as their designation. They drew inspiration from a date written on the back page of a Jack Kerouac book. The date was writte... Read more 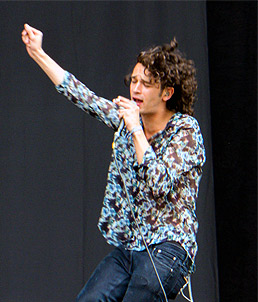