Taking Back Sunday tickets can be purchased here where you'll discover a gigantic selection of affordable concert tickets.

How to Buy Taking Back Sunday Tour Tickets Here

You can search the times and dates in the tour schedule above to find the specific Taking Back Sunday concert you want to attend.

Click on the red 'View Tickets' button to see all the available seats for that Taking Back Sunday show, along with an interactive seating chart that will help you locate the best seats for your price.

You'll have to choose how many tickets you want to purchase for the Taking Back Sunday concert tour, and then you'll be brought to our secure checkout.

Shipping/Delivery Information for Taking Back Sunday Tickets:
You can choose either standard or express delivery and you can specify special delivery instructions if necessary. Your live music concert tickets will be shipped to you using Federal Express.

Also, some tickets to the Taking Back Sunday tour may be available for immediate download as e-tickets, or electronic tickets, that you can print right from your device.

About Taking Back Sunday

Melodic hardcore might not be a genre in and of itself, but it's an apt description of Taking Back Sunday's style. Guitarists John Nolan and Ed Reyes, vocalist Adam Lazzara, bassist Shaun Cooper, and drummer Mark O'Connell formed the band in 1999 in Amityville, New York. After their first demo EP and a glut of touring, a deal with Victory Records came along.

The guys entered the studio with producer Sal Villanueva and exited with Tell All Your Friends. Lazzara's impassioned voice was the perfect complement to the driving guitar sound established by Nolan and Reyes.

Another onslaught of touring filled most of the next two years and led to tensions within the group. Nolan and Cooper soon departed to be replaced by guitarist/vocalist Fred Mascherino and bassist Matt Rubano.

After a bit more touring to gel the new line-up, Taking Back Sunday was back in the studio. In 2004, they released Where You Want to Be, debuting at number three on the Billboard album chart. The ensuing tour sold out across the country and the band also hopped on the Vans Warped Tour.

The album's success earned the band a deal with Warner Bros. Records and some higher profile tour slots, such as a run with Jimmy Eat World. Eric Valentine was recruited to helm the third record, Louder Now, which showcased an edgier side of the band and harnessed their live energy. The April 2006 release came in at number two on the Billboard Hot 200. Keeping on that theme, the band next issued the live CD/DVD set Louder Now: Part Two.

Toward the end of 2007, Mascherino took his leave to pursue a solo career. Matt Fazzi came in to replace him as the group used 2008 to work on new tunes and play a handful of shows. The following summer, New Again dropped followed by Live from Orensanz in 2010.

Hitting a crossroads in the band's history, the original line-up found its way back together in late 2010. As a result, an eponymous set was issued in 2011 as Taking Back Sunday's fifth album. 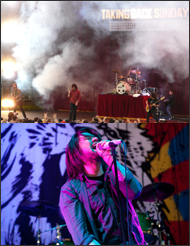