Sublime with Rome tickets can be purchased here where you'll discover a massive choice of affordable concert tickets.

How to Buy Sublime with Rome Tour Tickets Here

You can search the times and dates in the tour schedule above to find the specific Sublime with Rome concert you want to attend.

Click on the red 'View Tickets' button to see all the available seats for that Sublime with Rome show, along with an interactive seating chart that will help you locate the best seats for your price.

You'll have to choose how many tickets you want to purchase for the Sublime with Rome concert tour, and then you'll be brought to our secure checkout.

Shipping/Delivery Information for Sublime with Rome Tickets:
You can choose either standard or express delivery and you can specify special delivery instructions if necessary. Your live music concert tickets will be shipped to you using Federal Express.

Also, some tickets to the Sublime with Rome tour may be available for immediate download as e-tickets, or electronic tickets, that you can print right from your device.

About Sublime With Rome

The original Sublime line-up joined forces in Long Beach in 1988, with singer/guitarist Brad Nowell, bassist Eric Wilson, and drummer Bud Gaugh putting various ska and reggae spins onto punk rock. Two albums in about seven years later, Nowell died after a heroin overdose just prior to the release of their eponymous third album.

The album's singles -- "What I Got," "Santeria," and "Wrong Way" – all enjoyed solid successes and the record went on to sell more than five million units, boosting sales of their previous releases, as well.

Left in a lurch, Wilson and Gaugh formed the Long Beach Dub Allstars, but the Sublime lightning refused to be bottled a second time and the Allstars dissolved in 2002, leaving the guys to find other projects.

Meanwhile, the Sublime legacy was bled for all its worth with various posthumous releases, including Second Hand Smoke in 1997, Stand by Your Van and Acoustic: Bradley Nowell & Friends in 1998, Greatest Hits in 1999, and Gold in 2005.

To capitalize on what they'd help build but by-step legal wranglings with Nowell's estate, Wilson and Gaugh circled back around for a 2009 reunion gig, recruited a new front man in Rome Ramirez, and became Sublime with Rome a year later. One of their early gigs was at Cypress Hill's Smokeout Festival in late 2009 alongside Bad Brains, Slipknot, Deftones, and others.

The new trio hit the road and released Yours Truly in 2011 via Fueled by Ramen and produced by guitarist Paul Leary of the Butthole Surfers. The lead single, “Panic,” earned them a performance on Jimmy Kimmel Live! The album met with a favorable enough response that two subsequent singles -- "Lovers Rock" and "Take It or Leave It" – were also released.

By the end of the year, though, Gaugh had decided to leave the band, a decision announced at the annual KROQ Almost Acoustic Christmas concert. Gaugh has stated that he would be up for collaborating with Wilson again in the future, but under different circumstances. He said that playing the songs under the Sublime banner without Nowell just felt wrong. Drummer Josh Freese was expected to be the short-term replacement. 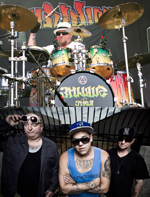