Our Snoop Dogg Pasadena 3/31/69 ticket prices are often cheaper than the rest, our checkout and servers are secure, and all Snoop Dogg The Rose - Pasadena tickets are 100% guaranteed.

Click on the red 'View Tickets' button above to see all the available tickets for that The Rose - Pasadena concert, along with an interactive seating chart that will help you locate the best seats for your price. After you choose how many The Rose - Pasadena tickets you want, you'll be brought to our secure checkout to finalize your Snoop Dogg Pasadena concert tickets purchase.

Snoop Dogg Ticket Shipping/Delivery Information:
You can choose either standard or express delivery. There may also be electronic Snoop Dogg Pasadena March 31, 2069 tickets (or e-tickets) available for immediate download. Otherwise, tickets are shipped with Federal Express.

Other Upcoming Concerts in Pasadena, California

Born Calvin Broadus, Snoop Dogg was nicknamed thusly due to his looks. In his hometown of Long Beach, Calif., the young man had numerous run-ins with the law, including an arrest for cocaine possession which earned him some jail time.

Music became his salvation, with home-grown demo tapes as his outlet. Snoop collaborated with Warren G, stepbrother to Dr. Dre of N.W.A. After Warren got a tape to Dre, Snoop had his first break. Dre brought Snoop along on his first solo project in 1992, a song for the movie Deep Cover.

The buzz was immediate and solid, especially after The Chronic, Dre's solo debut album, was released. It featured Snoop in equal parts to Dre. The singles "Nuthin' But a 'G' Thang" and "Dre Day" became crossover hits in 1993. 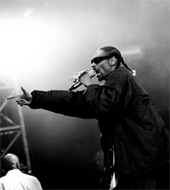