Santana tickets can be purchased here where you'll discover a massive selection of affordable concert tickets.

Booking your Santana tickets here is easy and secure. Either choose the Santana concert above to purchase them online, or call us at 1-866-837-0608.

You can search the times and dates in the tour schedule above to find the specific Santana concert you want to attend.

Click on the red 'View Tickets' button to see all the available seats for that Santana show, along with an interactive seating chart that will help you locate the best seats for your price.

You'll have to choose how many tickets you want to purchase for the Santana concert tour, and then you'll be brought to our secure checkout.

Santana ticket prices may be above or below face value and can fluctuate. You'll find cheap Santana tickets here at relatively affordable prices.

Shipping/Delivery Information for Santana Tickets:
You can choose either standard or express delivery and you can specify special delivery instructions if necessary. Your live music concert tickets will be shipped to you using Federal Express.

Also, some tickets to the Santana tour may be available for immediate download as e-tickets, or electronic tickets, that you can print right from your device.

Santana: a band, a man. Carlos Santana used his immense guitar talent to pioneer a fusion of rock, salsa, and jazz in the late 1960s. His blues-tinged riffs were set against a backdrop of Latin percussion, creating a signature sound that has evolved over the years yet remains entirely his own.

Growing up in Jalisco, Mexico, young Carlos took to music very early on, with violin at 5 and guitar at 8. The family spent some time living in Tijuana where Carlos studied with Javier Bátiz. Later, they relocated to San Francisco allowing him to see his idols perform up close and personal, B.B. King being a particular highlight.

In 1966, Carlos and a couple of street musicians formed the Santana Blues Band and set out to do music full time. Shortening the name to just Santana, the band gained fans in quick order. Legendary Bay Area promoter Bill Graham secured them a performance at Woodstock in 1969 that earned them a deal with the Clive Davis-run Columbia Records.

After an initial misstep during the recording of their debut, some line-up changes shifted band members around. The self-titled record went on to hit number four on the U.S. album charts, with the single "Evil Ways" – a Graham suggestion – reaching number nine.

Personal and artistic differences began emerging within the band's ranks. Turning down a competing offer from Eric Clapton, guitarist Neal Schon signed on in time to contribute to their third set, Santana III. The collection, which also featured Tower of Power's horn section, topped the charts once more, selling some two million units.

Drug problems and financial mismanagement ensued, but Carlos led the efforts on their fourth record, Caravanserai, with an infusion of new musicians. Schon and Gregg Rolie departed after they wrapped in the studio. Both would go on to be part of Journey.

The jazz fusion-filled album pleased critics, but did not sell all that well. Carlos got married, dove into spiritual pursuits, regrouped with different players, and offered up Welcome as the fourth Santana album.

As he moved further and further into jazz territory, Carlos continued to swap out his supporting players so that the sound could evolve properly. He collaborated with Alice Coltrane, Jack DeJohnette, Leon Patillo, and Jules Broussard along his journey.

Now at the management helm, Bill Graham, however, steered things back to rock for 1976's Amigos. With solid funk and Latin underpinnings, the record got Santana back on the pop charts and solidified a formula that would stay in place for years to come, although the players would continue to change. Carlos kept a solo career going on the side to pursue his more ethereal notions.

When sales started to slump, Graham stepped in once again and got the band on the line-up for Live Aid in 1985. Their appearance re-energized their fan base. Still, their numbers weren't up to snuff for the record executives.

Carlos switched camps and signed with Polygram Records in 1990. The affair was short-lived and he was without a deal by the end of the decade. All wasn't lost, though. Carlos, along with his Santana band mates, was inducted into the Rock and Roll Hall of Fame in 1998.

By that time, Clive Davis was running Arista Records. He nabbed Carlos and suggested he make a record with some younger artists. The result was 1999's Supernatural and it included Rob Thomas, Wyclef Jean, Lauryn Hill, Eric Clapton, and Dave Matthews, among others. It was phenomenally successful selling over 15 million copies. The Thomas-fronted single "Smooth" topped the charts for 12 weeks.

The follow-up, 2002's Shaman, failed to capture the same lightning using the same bottle winning only one Grammy to Supernatural's nine. The same was true for 2005's All That I Am, minus the Grammy win.

In 2003, Rolling Stone put Carlos at number 15 in their 100 Greatest Guitarists of All Time. His collaborations continue to drive him whether they be with Herbie Hancock, Marcelo Vieira, or Chad Kroeger.

Non-music projects have also filled the days. Charitable work through his Milagro Foundation, a chain of upscale restaurants called Maria Maria, and other product lines are all part of the Carlos Santana playbook. 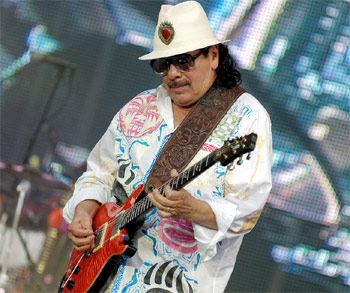