Booking your Rob Zombie tickets here is easy and secure. Either choose the Rob Zombie concert above to purchase them online, or call us at 1-866-837-0608.

You can search the times and dates in the tour schedule above to find the specific Rob Zombie concert you want to attend.

Click on the red 'View Tickets' button to see all the available seats for that Rob Zombie show, along with an interactive seating chart that will help you locate the best seats for your price.

You'll have to choose how many tickets you want to purchase for the Rob Zombie concert tour, and then you'll be brought to our secure checkout.

Shipping/Delivery Information for Rob Zombie Tickets:
You can choose either standard or express delivery and you can specify special delivery instructions if necessary. Your live music concert tickets will be shipped to you using Federal Express.

Also, some tickets to the Rob Zombie tour may be available for immediate download as e-tickets, or electronic tickets, that you can print right from your device.

We sometimes forget that music can be more than just a soundtrack for our dancing, partying, and romancing. For example, there’s the music of Rob Zombie. Yes, you can do all of the aforementioned activities to it, but his music also creates an atmosphere that’s similar to a classic horror film. That’s because Zombie is greatly inspired by sinister cinema. He has even sampled dialogue from scary movies in his songs. In other words, his music is dark, heavy, and frightening (but in a good way).

It should come as no surprise that when the singer isn’t making music, or selling Rob Zombie tickets to venues all over the world, he’s directing horror films. His credits include House of 1000 Corpses, The Devil’s Rejects, and The Lords of Salem. In 2007, he directed a remake of the 1978 film Halloween. His remake is the highest grossing film of the series.

Zombie formed White Zombie in the mid-1980s with his then-girlfriend Sean Yseult. They released their first album, Soul-Crusher in 1987 and their sophomore effort, Make Them Die Slowly, in 1989. Neither did very well. The band’s big break came in 1993 when the video to their first single, “Thunder Kiss ’65,” aired on MTV’s Beavis and Butt-head. The album from which it came, La Sexorcisto: Devil Music Volume One, peaked at #26 on the Billboard 200 and eventually achieved a 2x platinum certification.

White Zombie released what would be their last album, Astro-Creep: 2000 – Songs of Love, Destruction and Other Synthetic Delusions of the Electric Head, in April of 1995. It peaked at #6 on the Billboard 200. White Zombie officially broke up in 1998. According to Rob Zombie, there were no bad feelings amongst members; it was just time to call it quits.

As you might imagine from a fan and director of horror films, Rob Zombie’s live shows are very theatrical. He employs many horror-film related elements into his concerts. What else would you expect from someone who married his wife, actress Sherri Moon, on Halloween of 2002. 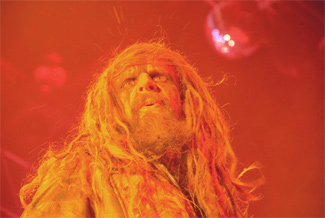