Our Rascal Flatts Wantagh 9/17/20 ticket prices are often cheaper than the rest, our checkout and servers are secure, and all Rascal Flatts Northwell Health at Jones Beach Theater tickets are 100% guaranteed.

Joe Don Rooney, along with second cousins Gary Levox and Jay DeMarcus, are and always have been Rascal Flatts. Though the cousins hail from Columbus, Ohio, the band draws its name from a landmark in Rooney's home state of Oklahoma.

DeMarcus left Columbus in 1992 to chase a music dream in Nashville with the group East to West while Levox embarked on a career of his own, eventually making his way to Music City, as well. DeMarcus ended up in Chely Wright's band where he met Rooney who was her guitarist.

Gigging regularly with Levox at Nashville's Fiddle and Steel Guitar Bar, DeMarcus invited Rooney to fill in for their sick guitarist one night in January of 1999 and the rest is history in the making.

Their signature harmonies layered on top of solid songwriting landed them a deal with Lyric Street Records in no time. Their 2000 self-titled debut landed four singles in the Top 10 including, “Prayin' for Daylight.” From the other three, “I'm Movin' On” was named 2002's Song of the Year by the Academy of Country Music.

Taking that success even further, their 2002 sophomore outing, Melt, yielded their first number one country hit in “These Days,” as well as their second with “Mayberry.” The album went platinum in less than two months. Younger fans, in particular, flocked to the trio.

Click on the red 'View Tickets' button above to see all the available tickets for that Northwell Health at Jones Beach Theater concert, along with an interactive seating chart that will help you locate the best seats for your price. After you choose how many Northwell Health at Jones Beach Theater tickets you want, you'll be brought to our secure checkout to finalize your Rascal Flatts Wantagh concert tickets purchase.

Rascal Flatts Ticket Shipping/Delivery Information:
You can choose either standard or express delivery. There may also be electronic tickets (or e-tickets) available for immediate download. Otherwise, tickets are shipped with Federal Express. 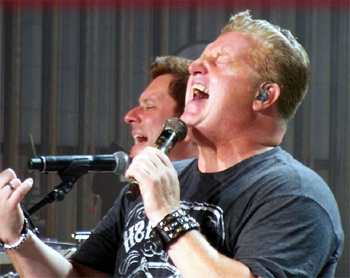