Our Post Malone Duluth 3/3/20 ticket prices are often cheaper than the rest, our checkout and servers are secure, and all Post Malone Infinite Energy Arena tickets are 100% guaranteed.

Click on the red 'View Tickets' button above to see all the available tickets for that Infinite Energy Arena concert, along with an interactive seating chart that will help you locate the best seats for your price. After you choose how many Infinite Energy Arena tickets you want, you'll be brought to our secure checkout to finalize your Post Malone Duluth concert tickets purchase.

Post Malone Ticket Shipping/Delivery Information:
You can choose either standard or express delivery. There may also be electronic Post Malone Duluth March 3, 2020 tickets (or e-tickets) available for immediate download. Otherwise, tickets are shipped with Federal Express.

Other Upcoming Concerts in Duluth, Georgia

If you want a concert experience with great music and energy, look no further than Post Malone. The Syracuse-born rapper brings an undeniable swagger to the stage.

He’s also very personable. If you’re in the front row of a Post Malone concert you’ll probably get a chance to shake his hand (albeit briefly). And regardless of where you sit, you’re likely to see him smile more than once.

You’ll definitely hear him perform his breakout hit, “White Iverson.” Released on SoundCloud in August of 2016, the song rocketed Post Malone to stardom.

Other songs beloved by his fans include “Go Flex,” “Too Young,” and “Déjà Vu (featuring Justin Bieber).” All three of those songs, as well as “White Iverson,” are included on his debut album, Stoney (2016).

Post Malone’s real name is Austin Richard Post. He was born on the Fourth of July in 1995.

Many believe his stage name is a reference to basketball player Karl Malone. Actually, “Post” is his last name and “Malone” was randomly contrived. 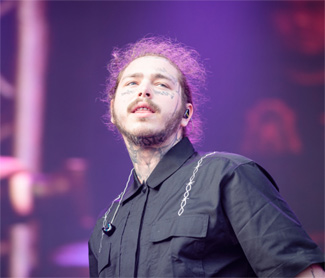