Booking your Peter Frampton tickets here is easy and secure. Either choose the Peter Frampton concert above to purchase them online, or call us at 1-866-837-0608.

You can search the times and dates in the tour schedule above to find the specific Peter Frampton concert you want to attend.

Click on the red 'View Tickets' button to see all the available seats for that Peter Frampton show, along with an interactive seating chart that will help you locate the best seats for your price.

You'll have to choose how many tickets you want to purchase for the Peter Frampton concert tour, and then you'll be brought to our secure checkout.

Shipping/Delivery Information for Peter Frampton Tickets:
You can choose either standard or express delivery and you can specify special delivery instructions if necessary. Your live music concert tickets will be shipped to you using Federal Express.

Also, some tickets to the Peter Frampton tour may be available for immediate download as e-tickets, or electronic tickets, that you can print right from your device.

Peter Frampton was born in Beckenham, England on April 22, 1950. Frampton taught himself how to play guitar at age eight and by age ten he was playing in local rock and roll bands. Frampton attended school with David Bowie and the two would often jam during lunch breaks and in between classes.

When he was just a tween, Frampton was in a band produced and managed by Rolling Stones bassist Bill Wyman. In 1966, Frampton formed a group called The Herd. This outfit, which launched Frampton's career, had three top 20 hits in the U.K. In 1969, Frampton and Small Faces guitarist Steve Marriott formed the hard rock outfit, Humble Pie. Despite Frampton being only 19-years-old, many called Humble Pie a supergroup.

Frampton's solo career began in 1972 with the release of his debut album, "Wind of Change." He released three more albums by 1975 but none achieved commercial success. In 1976, he released "Frampton Comes Alive!" and everything changed. The opus went six times platinum and contained the smash hits "Show Me the Way," "Baby, I Love Your Way," and "Do You Feel Like We Do." All of those songs are still getting major air time on classic rock stations.

"Frampton Comes Alive!" stayed on the Billboard 200 for 97 weeks, was the top selling album of 1976, and became the top selling live album of all-time (although it has since been passed). The album was recorded in 1975 mostly during a Peter Frampton concert at the Winterland Arena in San Francisco, California.

Frampton's stardom ended as quickly as it arrived. His shirtless appearance on the cover of Rolling Stone Magazine and his starring role in the much maligned film "Sgt. Pepper's Lonely Hearts Club Band" turned Frampton into a teen idol instead of a guitar god. His follow up album, "I'm In You," went platinum but after that his records struggled to sell. In 1978, Frampton was the victim of a near-fatal auto accident. The ordeal greatly affected his creative output and he was never really the same.

Frampton continued to release albums throughout the 1980's and then sparingly into the 1990's and 2000's. He's also sold Peter Frampton tickets to several tours, but he's never came close to equaling the success of "Frampton Comes Alive!" In 2010 and 2011, Peter Frampton tour was launched to support his fourteenth studio album, "Thank You Mr. Churchill."

Two of Frampton's most famous songs, "Show Me the Way" and "Do You Feel Like We Do," showcased a guitar effect known as the talk box. A talk box allows the user to "sing" through their guitar. Frampton was introduced to the effect while working on George Harrison's 1970 solo album "All Things Must Pass."

Frampton has also worked with Ringo Star, Harry Nilsson, John Entwistle, Jack Bruce, Billy Preston, and Jerry Lee Lewis. In 1987, Frampton worked on Bowie's album "Never Let Me Down" and played guitar on his Glass Spider Tour. Frampton credits Bowie with turning him from a teen idol into a bona fide rock guitarist. 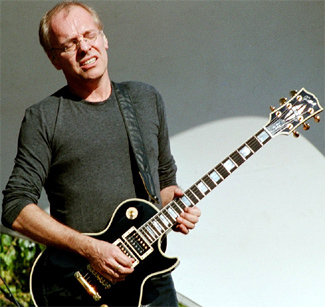