Pentatonix tickets can be purchased here where you'll discover a huge selection of affordable concert tickets.

Booking your Pentatonix tickets here is easy and secure. Either choose the Pentatonix concert above to purchase them online, or call us at 1-866-837-0608.

You can search the times and dates in the tour schedule above to find the specific Pentatonix concert you want to attend.

Click on the red 'View Tickets' button to see all the available seats for that Pentatonix show, along with an interactive seating chart that will help you locate the best seats for your price.

You'll have to choose how many tickets you want to purchase for the Pentatonix concert tour, and then you'll be brought to our secure checkout.

Shipping/Delivery Information for Pentatonix Tickets:
You can choose either standard or express delivery and you can specify special delivery instructions if necessary. Your live music concert tickets will be shipped to you using Federal Express.

Also, some tickets to the Pentatonix tour may be available for immediate download as e-tickets, or electronic tickets, that you can print right from your device.

Pentatonix is an a cappella quintet. That means the five singers rely solely on their voice both in the recording studio and on the concert stage. 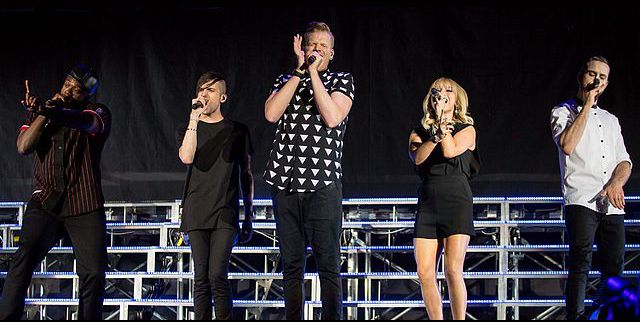 So, when you attend a Pentatonix concert all you’re going to hear is the band’s five voices. There’s no accompaniment whatsoever—no pianist, no guitar, no rhythm section.

What Type of Songs Do Pentatonix Perform In Concert?

The group is also famous for medleys. They might string together snippets of songs from legends like Michael Jackson or Beyoncé.

What Type Of Crowd Attends A Pentatonix Concert?

Pentatonix attracts music lovers of all ages, but they predominantly attract preteens and teens. Yes, some of the older fans are chaperones, but many are there on their own volition.

Pentatonix rose to national fame in 2011 thanks to winning the third season of The Sing-Off—a singing competition broadcasted on NBC.

After the “The Sing-Off,” the group formed a YouTube channel. That channel has gone on to be one of the site’s most popular.

Grassi, Hoying, and Maldonado attended high school together. They began singing as a group so they could enter a contest to meet the cast of Glee. They did not win the contest.

Originally, Grassi, Hoying, and Maldonado were going to try out for The Sing-Off by themselves but they quickly learned they needed to be a quartet in order to audition.

To increase their ranks, they tapped Kaplan, who sings bass. Then, they added Olusola after they saw a YouTube video of him “celloboxing.” That’s when one plays the cello and beatboxes at the same time.