Our Niall Horan Glendale 5/15/20 ticket prices are often cheaper than the rest, our checkout and servers are secure, and all Niall Horan Gila River Arena tickets are 100% guaranteed.

Click on the red 'View Tickets' button above to see all the available tickets for that Gila River Arena concert, along with an interactive seating chart that will help you locate the best seats for your price. After you choose how many Gila River Arena tickets you want, you'll be brought to our secure checkout to finalize your Niall Horan Glendale concert tickets purchase.

The house lights dim. The excitement reaches its peak. You inhale, preparing to scream your approval at the first sign of our hero.

Then it happens. The lights come back on. The music starts. There he is, standing on the stage ready to perform.

You’re at a Niall Horan concert. You can hardly believe it. You’re seeing a member of One Direction live and in person.

From 2010 to 2016, Horan was a member of the aforementioned pop band. His solo career began in earnest in 2016 with the release of his debut single, “This Town.” It was followed by the single “Slow Hands.” His debut album dropped in the fall of 2017.

The Irish singer launched his first headlining trek on the final day of August in 2017. His first concert took place in Dublin. His tour saw him perform in five continents.

Horan was born Sept. 13, 1993 in Mullingar, Ireland. His musical journey began on his brother’s guitar. His brother received one for Christmas but never played it.

His singing talent was eventually discovered by his aunt. She thought she was listening to the radio, but she was actually listening to her nephew.

Niall Horan Ticket Shipping/Delivery Information:
You can choose either standard or express delivery. There may also be electronic tickets (or e-tickets) available for immediate download. Otherwise, tickets are shipped with Federal Express.

Other Upcoming Concerts in Glendale, Arizona 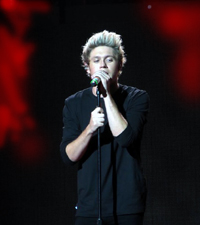