New Kids on the Block Tickets

New Kids on the Block tickets can be purchased here where you'll discover a massive choice of affordable concert tickets.

How to Buy New Kids on the Block Tour Tickets Here

You can search the times and dates in the tour schedule above to find the specific New Kids on the Block concert you want to attend.

Click on the red 'View Tickets' button to see all the available seats for that New Kids on the Block show, along with an interactive seating chart that will help you locate the best seats for your price.

You'll have to choose how many tickets you want to purchase for the New Kids on the Block concert tour, and then you'll be brought to our secure checkout.

Shipping/Delivery Information for New Kids on the Block Tickets:
You can choose either standard or express delivery and you can specify special delivery instructions if necessary. Your live music concert tickets will be shipped to you using Federal Express.

Also, some tickets to the New Kids on the Block tour may be available for immediate download as e-tickets, or electronic tickets, that you can print right from your device.

About New Kids on the Block

Producer Maurice Starr can't have known what putting Donnie Wahlberg, Joey McIntyre, Jordan Knight, Jonathan Knight, and Danny Wood in a band together would fully mean way back in 1984. Together they formed New Kids on the Block.

Starr, known for his discovery and guidance of New Edition, first found Wahlberg who helped recruit his younger brother Mark, along with Wood and Jordan Knight. Jordan brought his brother Jonathan in on the deal, too. Mark dropped out and was eventually replaced by McIntyre.

In 1986, the boys released their eponymous debut through Columbia Records and it proceeded to fail miserably. Despite the lack of sales, Starr asked for a second shot.

Not entirely pleased with the bubblegum image and sound they had going out of the gate, Donnie, Danny, and Jordan pushed to have more input. The first single from Hangin' Tough, “Please Don't Go Girl,” didn't do so well and the label was on the verge of dropping the band when a radio station in Florida starting spinning the track. With a bit of effort, the song cracked Billboard's Top 10.

Showcasing their visual appeal on national TV and as a support act for teen idol Tiffany helped NKOTB gain some momentum and sales. The next two singles, “You Got It (The Right Stuff)” and “I'll Be Loving You (Forever),” each made ever-increasing strides, with the latter topping the charts. Five top 10 hits later, the album had gone eight-times platinum and won two American Music Awards.

The success of Hangin' Tough even helped catalyze sales of the NKOTB debut release, including the song “Didn't I (Blow Your Mind This Time).” A Christmas album and home video followed.

May of 1990 saw the next NKOTB release, Step by Step. The title tracked shot up the charts and became their best-selling single. “Tonight” came next and pushed their consecutive top 10 singles run to nine. The record went on to sell more than 20 million copies worldwide.

In 1992, the group faced down allegations of lip-synching with a live performance on The Arsenio Hall Show. Nevertheless, the backlash had begun and fickle fans were finding their way to grunge rock and gangsta rap.

A year later, New Kids parted ways with Starr and began work on what would become their fourth release, 1994's Face the Music. Although the record met with some critical praise, sales were lackluster.

While on tour, Jonathan Knight, suffering panic attacks and anxiety, left the band. The remaining members eventually decided to call it quits, too.

During subsequent years, numerous attempts to reunite the band fell short. However, in 2007, the NKOTB quietly came together to work on their first album together in 15 years, 2008's The Block. The album climbed all the way to number two on the Billboard album charts and their 2009 concert itinerary was so successful they are at it again this year.

Band member Donnie Wahlberg said of their latest rejuvenation, “We’ve let our fans dictate this whole ride. They’ve been the ones to guide us through this whole journey. They want more, we’ll give them more, and we’ll enjoy every moment along the way.”

Frequently Asked Questions About New Kids on the Block Tickets 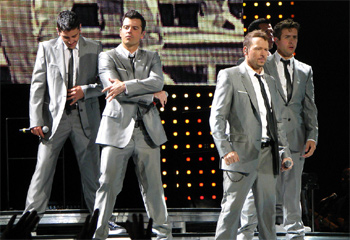