Booking your Neil Young tickets here is easy and secure. Either choose the Neil Young concert above to purchase them online, or call us at 1-866-837-0608.

You can search the times and dates in the tour schedule above to find the specific Neil Young concert you want to attend.

Click on the red 'View Tickets' button to see all the available seats for that Neil Young show, along with an interactive seating chart that will help you locate the best seats for your price.

You'll have to choose how many tickets you want to purchase for the Neil Young concert tour, and then you'll be brought to our secure checkout.

Shipping/Delivery Information for Neil Young Tickets:
You can choose either standard or express delivery and you can specify special delivery instructions if necessary. Your live music concert tickets will be shipped to you using Federal Express.

Also, some tickets to the Neil Young tour may be available for immediate download as e-tickets, or electronic tickets, that you can print right from your device.

Neil Percival Young was born on 11/12/45 in Toronto, Ontario. Neil is a Canadian singer-songwriter, guitarist, and film director from Winnipeg, Manitoba.

Despite a career spanning more than four-and-a-half decades, Neil Young has still managed to stay relevant and edgy. The Canadian-born singer-songwriter has garnered a large following of loyal fans thanks to his soulful voice, his unique guitar playing, and his urbane compositions.

Young's music is primarily a mix of rock, hard rock, folk, and country. He's explored all those genres acoustically and electronically. However, his hard rock has been so influential and innovated that he's been called the "Godfather of Grunge."

Young is a two-time member of the Rock and Roll Hall of Fame having been inducted as both a solo artist and as a member of Buffalo Springfield. He also served as the fourth member of Crosby, Stills & Nash making the group Crosby, Stills, Nash, & Young (CSN&Y).

Long time friend and fellow Canadian Stephen Stills asked Young to sit in with the Crosby, Still, & Nash but Young would do so only if he was made a full-fledge member. Young's involvement with CSN&Y was relatively brief as he was very uncooperative and mulish. Stills once remarked of Young, he "wanted to play folk music in a rock band."

Young's imagination and talent has not only garnered him much success but a very interesting career as well...

In 1966, Neil Young joined a band called the Mynah Birds which was led by funk legend Rick James.

Young's first major hit as a songwriter was a tune called "Flying on the Ground is Wrong." The song was recorded by The Guess Who in 1967 and it eventually reached number 36 on the Canadian singles chart.

In 2005, Young nearly died after being treated for a brain aneurysm. While walking the streets of New York City he passed out from a bleeding femoral artery. Surgeons had used the artery to access his aneurysm.

Young has dealt with political issues throughout his entire career. In 1970, while working with CSN&Y, Young wrote "Ohio" about the Kent State massacre. His 1988 single "This Note's For You" lambasted corporate rock, Michael Jackson, and advertising. In 1989 he released "Rockin' in the Free World" which criticized the United States and the policies of President George H.W. Bush. Young's 2006 album, Living With War, admonished the War in Iraq and called for the impeachment of President George W. Bush.

Music is not Young's only creative outlet. He's directed five films under the pseudonym Bernard Shakey. Most interesting of which was 1982's Human Highway starting Devo, Russ Tamblyn, and Dennis Hopper.

As an advocate of children with severe disabilities, Young helped establish The Bridge School. His passion for this causes stems from his sons, Zeke and Ben, having been diagnosed with cerebral palsy and his daughter, Amber Jean, having epilepsy. Young also suffers from epilepsy. 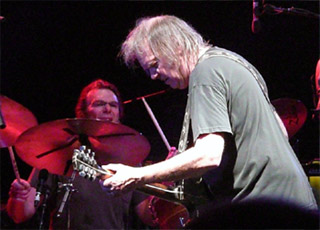