Morrissey tickets can be purchased here where you'll discover a gigantic choice of affordable concert tickets.

Booking your Morrissey tickets here is easy and secure. Either choose the Morrissey concert above to purchase them online, or call us at 1-866-837-0608.

You can search the times and dates in the tour schedule above to find the specific Morrissey concert you want to attend.

Click on the red 'View Tickets' button to see all the available seats for that Morrissey show, along with an interactive seating chart that will help you locate the best seats for your price.

You'll have to choose how many tickets you want to purchase for the Morrissey concert tour, and then you'll be brought to our secure checkout.

Morrissey ticket prices may be above or below face value and can fluctuate. You'll find cheap Morrissey tickets here at relatively affordable prices.

Shipping/Delivery Information for Morrissey Tickets:
You can choose either standard or express delivery and you can specify special delivery instructions if necessary. Your live music concert tickets will be shipped to you using Federal Express.

Also, some tickets to the Morrissey tour may be available for immediate download as e-tickets, or electronic tickets, that you can print right from your device.

A young Stephen Patrick Morrissey whittled away his days in Manchester, England, writing about the New York Dolls, James Dean, and whatever musical doings caught his ear. Not quite the right fit for the punk scene of the late '70s, Morrissey eventually stumbled into guitarist Johnny Marr and formed a songwriting partnership.

Together, as The Smiths, they made their debut in 1983 with “Hand in Glove.” The homoerotic lyrical theme found a fanbase in the UK underground. Morrissey made the most of his newfound soap box to voice bold opinions and employ on-stage flamboyance.

The following year, the Smiths' self-titled debut album dropped and included more cynical, dark lyrical turns. Once again, Morrissey took the opportunity to wax political. On the next album, he melded the personal and the professional by titling the set Meat Is Murder in a tip of the hat to his staunch vegetarianism. That melding continued with 1986's The Queen Is Dead, long considered the high mark of the Smiths' catalogue.

Despite their critical acclaim and popular success, Marr only stayed for one more album, 1987's Strangeways, Here We Come. Without his trusty comrade, Morrissey figured he might as well go it alone. And so he did.

Supported by producer Stephen Street, 1988's "Suedehead" and "Everyday Is Like Sunday" marked his entry on the scene as a solo artist. Their album, Viva Hate, did very well for him, as did two more singles – "The Last of the International Playboys" and "Interesting Drug."

Because he was having a bit of trouble culling a new album, Morrissey issued the Bona Drag compilation in 1990 to buy himself some time. Finally, Kill Uncle dropped in 1991 but didn't do so well. Critics proclaimed that Morrissey was, artistically, dead. Long live the Smiths.

Various public relations issues clouded the fact that Morrissey came back with a vengeance with Your Arsenal in 1992. Backed by guitarists Alain Whyte and Boz Boorer, Morrissey rocked hard and deep on Your Arsenal. Fans recognized what was happening and bought out tickets for Morrissey's Hollywood Bowl show even quicker than Beatles fans did.

With America on his side, Morrissey moved to Los Angeles prior to releasing Vauxhall and I in 1994. The strongest single, "The More You Ignore Me, the Closer I Get," made enough in-roads at MTV to signal that Morrissey was not dead, artistically or otherwise.

The World of Morrissey compilation came the next year along with Southpaw Grammar. Then came Maladjusted in 1996. Neither of the efforts managed to capitalize on his previous momentum. Still, his tours did solid business so he focused his efforts there.

It wouldn't be until 2004 that You Are the Quarry arrived lead by "Irish Blood, English Heart." Morrissey was back... again. A live collection, Live at Earls Court, followed the next year, as did the Who Put the “M” in Manchester? DVD.

Come 2006, it was Ringleader of the Tormentors which was produced by Tony Visconti and featured orchestrations by Ennion Morricone. Whyte took his leave of the band, though he did pen some tunes for Morrissey.

The more sparse rendering of Years of Refusal came in 2009 and found Jesse Tobias on guitar in place of Whyte. The set garnered solid critical reviews for Morrissey. 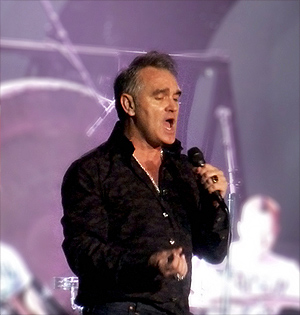