Despite being one of the comedy’s top stand-ups, Epps has only released one comedy album. Funny Bidness Da Album dropped in October of 2009. The collec... Read more 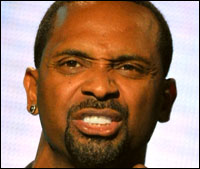