Michael Buble Fort Worth tickets can be purchased here where you'll find a huge selection of concert tour tickets.

Our Michael Buble Fort Worth 4/4/20 ticket prices are often cheaper than the rest, our checkout and servers are secure, and all Michael Buble Dickies Arena tickets are 100% guaranteed.

How to Buy Michael Buble Fort Worth, TX Tickets Here

Click on the red 'View Tickets' button above to see all the available tickets for that Dickies Arena concert, along with an interactive seating chart that will help you locate the best seats for your price. After you choose how many Dickies Arena tickets you want, you'll be brought to our secure checkout to finalize your Michael Buble Fort Worth concert tickets purchase.

About Our Michael Buble Fort Worth, TX Ticket Prices

Michael Buble Ticket Shipping/Delivery Information:
You can choose either standard or express delivery. There may also be electronic Michael Buble Fort Worth April 4, 2020 tickets (or e-tickets) available for immediate download. Otherwise, tickets are shipped with Federal Express.

Other Upcoming Concerts in Fort Worth, Texas

Michael Buble is a Grammy Award winning Canadian singer that has found success with his jazzy renditions of big band and easy listening standards as well as clever renditions of pop and soft rock classics.

In addition to selling more than 20 million albums worldwide, Buble has solidified himself as a successful concert performer. His music has appeared in dozens of films, and he's performed on countless television shows like The Today Show, American Idol, Dancing with the Stars, and The Oprah Winfrey Show.

Buble's self-titled debut album was released in 2003 when he was 28-years-old. It eventually went Platinum in the United States. Buble followed that opus with the album It's Time released in 2004. His third offering, Call Me Irresponsible, dropped in 2007. Despite not reaching multiple-Platinum status like its predecessor, Call Me Irresponsible did earn Buble his first number one album in America. Buble earned his second number one album in 2009 with the release of Crazy Love. That album was produced by Bob Rock and long time collaborators/producers Humberto Gatica and David Foster.

Aside from his singing career Buble has also done a bit of acting. In 1996, he appeared in a television show called "Death Game." Also in that year he portrayed a submarine sailor in two episodes of The X-Files. Buble performed in the 1997 Bravo! documentary Big Band Boom! His other credits include Duets (2000), Totally Blonde (2001), a... Read more 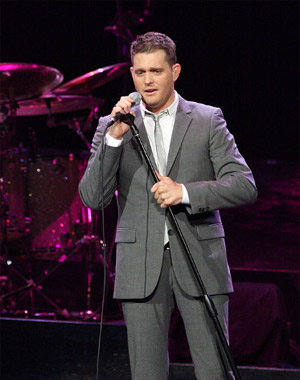