Booking your Mark Knopfler tickets here is easy and secure. Either choose the Mark Knopfler concert above to purchase them online, or call us at 1-866-837-0608.

You can search the times and dates in the tour schedule above to find the specific Mark Knopfler concert you want to attend.

Click on the red 'View Tickets' button to see all the available seats for that Mark Knopfler show, along with an interactive seating chart that will help you locate the best seats for your price.

You'll have to choose how many tickets you want to purchase for the Mark Knopfler concert tour, and then you'll be brought to our secure checkout.

Shipping/Delivery Information for Mark Knopfler Tickets:
You can choose either standard or express delivery and you can specify special delivery instructions if necessary. Your live music concert tickets will be shipped to you using Federal Express.

Also, some tickets to the Mark Knopfler tour may be available for immediate download as e-tickets, or electronic tickets, that you can print right from your device.

Mark Knopfler is a legend.

For nearly 40 years Knopfler has wooed fans with his guitar playing, singing, composing, and producing.  He’s best known as the frontman for Dire Straits but has also launched a very successful solo career.

Knopfler is one of the greatest guitarists of all-time.

The British musician is famous for his ability to “finger-pick” the guitar.  He developed his signature style during a jam session where the only guitar available for him to play was badly damaged.  It was so difficult to play that all Knopfler could do was finger-pick the strings.

Knopfler looks back on that night not as a disaster but the moment he discovered his guitar “voice.”

Knopfler formed the Dire Straits in the late 1970s.  The band released their first album in 1978.  They hit their zenith in 1985 with the album Brothers in Arms, the first compact disc to sell a million units.  Overall, the album sold more than 30 million units.

The blockbuster produced the hit singles: “Money for Nothing,” “So Far Away,” and “Walk of Life.”  Knopfler wrote all of the aforementioned songs.

“Money for Nothing” was the first music video played on MTV in Great Britain.

Dire Straits disbanded in 1995.  It’s unlikely that they’ll ever get back together.

One of the highlights of his post Dire Straits days was the 2006 album, All the Roadrunning.  He made it with Emmylou Harris.   The album was both a commercial and critical success.

Knopfler is known as a rock and roller, but he has dabbled in several other genres including country music.  In the late 1980s, Knopfler formed a country band called Notting Hillbillies.  He has also collaborated with such Nashville luminaries as Chet Atkins, John Anderson, George Jones, and Kris Kristofferson.

If you have Mark Knopfler tickets expect to hear great music… and not much else.  Knopfler is known for his relaxed performances that come with little accoutrements.  He’s so laidback that he sips tea while on stage.  Nonetheless, a Mark Knopfler concert will not disappoint.

Before becoming a guitar god, Kopfler was a lecturer at a college.  He has an English degree from the University of Leeds and spent a couple of years as a reporter for a local newspaper. 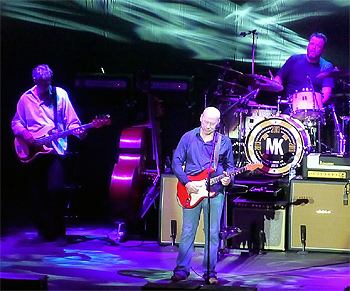