You can search the times and dates in the tour schedule above to find the specific Marco Antonio Solis concert you want to attend.

Click on the red 'View Tickets' button to see all the available seats for that Marco Antonio Solis show, along with an interactive seating chart that will help you locate the best seats for your price.

You'll have to choose how many tickets you want to purchase for the Marco Antonio Solis concert tour, and then you'll be brought to our secure checkout.

Shipping/Delivery Information for Marco Antonio Solis Tickets:
You can choose either standard or express delivery and you can specify special delivery instructions if necessary. Your live music concert tickets will be shipped to you using Federal Express.

Also, some tickets to the Marco Antonio Solis tour may be available for immediate download as e-tickets, or electronic tickets, that you can print right from your device.

Grupero takes overtly romantic lyrics and places them over traditional pop arrangements. It then adds indelible keyboard lines and Mexican-born rhythms. What really separates Solis from his contemporaries is his voice. Many a senorita has swooned over his emotional quivering tenor. All these musical ingredients have not only moved a lot of albums, and sold a lot of Marco Antonio Solis tickets, but they’ve turned the Mexican troubadour into a Latin Music Hall of Famer.

Solis broke on to the Latin music scene in the early 1970s with the band Los Bukis. The outfit stayed together for 25 years. During that time they released a bunch of hit records including five number ones singles. They also collected three gold records.


Solis went solo in 1995 and the hits have kept on coming. Like he did with Los Bukis, Solis managed to summit the Latin singles chart five times and get three of his studio albums certified gold. In February of 1999, his opus Trozo De Mi Alma worked its way to the ultimate spot on the Billboard Latin 50, a first in his amazing career.

In addition to being one of the Latin music world’s most successful and popular recording artists, Solis is also an accomplished composer and producer. He’s won major awards and collected prestigious accolades for work he’s done in both fields.

Do you remember those ten number one singles previously mentioned? Well, Solis wrote all of them. He’s also written material for other performers. Artists that have recorded Solis’ compositions include Rocio Durcal, Marisela Maria Sorte, and Enrique Guzman.

As for producing, Solis has taken the reigns throughout his solo days and during his time with Los Bukis. He’s also produced albums for Olga Tanon, Ann Barbara, and Ezequiel Pena.

Solis has been married twice and has four kids. He was born four days after Christmas in 1959 in Ario de Rosales, Michoacan. Solis made his “artistic debut” when he was 12 years old. 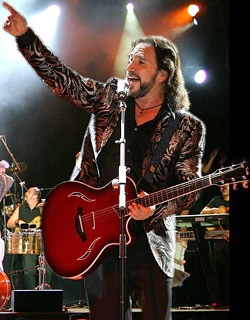