Mana tickets can be purchased here where you'll discover a huge choice of affordable concert tickets.

Booking your Mana tickets here is easy and secure. Either choose the Mana concert above to purchase them online, or call us at 1-866-837-0608.

You can search the times and dates in the tour schedule above to find the specific Mana concert you want to attend.

Click on the red 'View Tickets' button to see all the available seats for that Mana show, along with an interactive seating chart that will help you locate the best seats for your price.

You'll have to choose how many tickets you want to purchase for the Mana concert tour, and then you'll be brought to our secure checkout.

Mana ticket prices may be above or below face value and can fluctuate. You'll find cheap Mana tickets here at relatively affordable prices.

Shipping/Delivery Information for Mana Tickets:
You can choose either standard or express delivery and you can specify special delivery instructions if necessary. Your live music concert tickets will be shipped to you using Federal Express.

Also, some tickets to the Mana tour may be available for immediate download as e-tickets, or electronic tickets, that you can print right from your device.

Guadalajara, Jalisco has boasting rights when it comes to the Latin rock group Maná. The Mexican city was the setting in 1986 when singer Fher Olvero, guitarist Ulises Calleros, bassist Juan Diego Calleros, and drummer Alex González came together. This was after a brief run by some of the musicians in a band dubbed The Green Hat Spies.

Maná first signed a deal with Polygram Records, but had a difference of opinion in terms of the project's vision. A move to Warner Bros. came just before their first release, Falta Amor, in 1992. The third cut from the record, "Rayando el Sol," became the band's first hit single as they toured through Mexico and South America.

Just after the record came out, Ulises Calleros took his leave. In his stead, keyboardist Iván González and guitarist Cesar Lopez were recruited. Lopez only lasted through the band's next record, Donde Jugaran los Niños?, in 1994. Regardless, the effort was enough to catapult Maná into the stratosphere.

Next up, in 1995, was Maná En Vivo. The collection managed to harness the band's live show. That year also marked the joining of guitarist Sergio Vallin for Cuando los Angeles Lloren.

The 1999 release of Maná's MTV Unplugged set, as well as a guest spot on "Corazón Espinado" from Carlos Santana's mega hit Supernatural. Santana re-paid Maná by sitting in on their 2002 effort, Revolución de Amor, which won another Grammy for Best Latin Rock/Alternative Album.

It wouldn't be until 2006 that the group would issue a new studio album in Amar Es Combatir. The set was the highest charting Spanish-language debut ever on the Billboard 200 when it entered at number four. The single "Labios Compartidos" also climbed the charts.

For 2008, Maná offered up the DVD/CD set of Arde El Cielo which captures a performance on the Amar es Combatir Tour. Fans would have to wait another three years for Drama y Luz, Maná's next studio album. 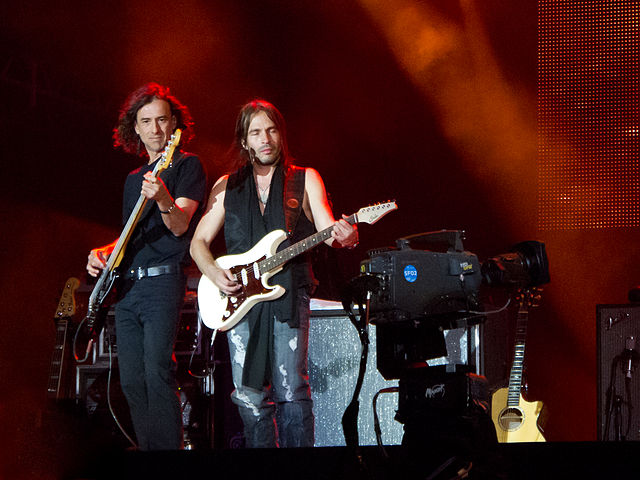