Booking your Lynyrd Skynyrd tickets here is easy and secure. Either choose the Lynyrd Skynyrd concert above to purchase them online, or call us at 1-866-837-0608.

You can search the times and dates in the tour schedule above to find the specific Lynyrd Skynyrd concert you want to attend.

Click on the red 'View Tickets' button to see all the available seats for that Lynyrd Skynyrd show, along with an interactive seating chart that will help you locate the best seats for your price.

You'll have to choose how many tickets you want to purchase for the Lynyrd Skynyrd concert tour, and then you'll be brought to our secure checkout.

Shipping/Delivery Information for Lynyrd Skynyrd Tickets:
You can choose either standard or express delivery and you can specify special delivery instructions if necessary. Your live music concert tickets will be shipped to you using Federal Express.

Also, some tickets to the Lynyrd Skynyrd tour may be available for immediate download as e-tickets, or electronic tickets, that you can print right from your device.

There were 20 additional passengers on board including band members Allen Collins, Billy Powell, Artimus Pyle, Gary Rossington, Leon Wilkeson, and tour manager Ron Eckerman. Almost all were seriously injured—there were cracked ribs, broken vertebrae, punctured organs, concussions, and a nose that was nearly ripped off.

After the crash, Pyle and two others trudged through the woods/swamp looking for help when they ran into a local farmer. Depending on whom you ask, the farmer either fired a warning shot into the air or actually fired at Pyle (it was an air rifle). The farmer thought the crash survivors were escapees from a local prison.

The plane crash was devastating and the band disbanded for a decade. When they returned in 1987, Rossington, Powell, Wilkeson, and Pyle were joined by guitarist Ed King and Ronnie Van Zant’s younger brother, Johnny. Johnny Van Zant took over the singing and songwriting duties that previously belonged to his brother. The band wouldn’t release a new studio album until 1991.

In 2006, the band was inducted into the Rock and Roll Hall of Fame. However, only members in the band at the time of, or prior to, the crash were inducted. Lynyrd Skynyrd is still touring and releasing albums but the only original member left is Rossington. In 2013, the band celebrated its 40th anniversary by touring the United States with Bad Company.

Lynyrd Skynyrd are pioneers of a musical subgenre called southern rock. Some will say they are the quintessential southern rock band. The band released their first album in 1973, (Pronounced 'Leh-'nérd 'Skin-'nérd), and then four more before the hiatus. Four of these five albums were certified Platinum or better. The fifth was certified gold. The band’s most famous song is the regional anthem “Sweet Home Alabama.” They are also known for “Gimme Three Steps,” “Smell That Smell,” “What’s Your Name,” and the guitar classic “Free Bird.”

Before hitting it big, the band was known as “One Percent” and then “The Nobel Five.” They finally settled on “Leonard Skinner” which they later respelled as “Lynyrd Skynyrd.” Leonard Skinner was a P.E. teacher at the high school many of the original band members attended who hated long hair. Rossington actually dropped out of school rather than cut his long locks. One might think there was animosity between the two parties. If there was it didn’t last long as the band’s namesake later introduced them at a show in Jacksonville, Florida. 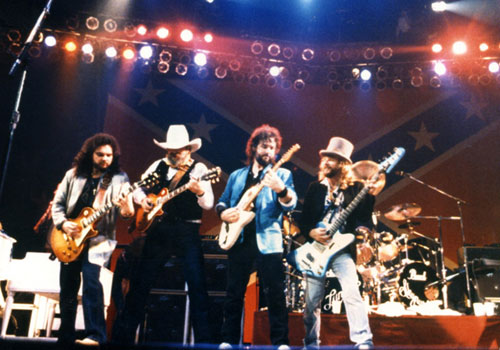