Booking your Lionel Richie tickets here is easy and secure. Either choose the Lionel Richie concert above to purchase them online, or call us at 1-866-837-0608.

You can search the times and dates in the tour schedule above to find the specific Lionel Richie concert you want to attend.

Click on the red 'View Tickets' button to see all the available seats for that Lionel Richie show, along with an interactive seating chart that will help you locate the best seats for your price.

You'll have to choose how many tickets you want to purchase for the Lionel Richie concert tour, and then you'll be brought to our secure checkout.

Shipping/Delivery Information for Lionel Richie Tickets:
You can choose either standard or express delivery and you can specify special delivery instructions if necessary. Your live music concert tickets will be shipped to you using Federal Express.

Also, some tickets to the Lionel Richie tour may be available for immediate download as e-tickets, or electronic tickets, that you can print right from your device.

Today, Lionel Richie is known as Nicole Richie’s father. That’s too bad, because Lionel Brockman Richie, Jr., is a great composer of love songs. Richie got his start in the 1960s as a member of the Commodores. While a member, Richie wrote such classic ballads as “Easy,” “Sail On,” “Still,” and “Three Times a Lady.” Richie also wrote “Lady” for Kenny Rogers and “Endless Love” for the film of the same name.

Richie released his self-titled debut in 1982. The album featured the singles “Truly,” “You Are” and “My Love.” All songs were either written or co-written by Richie. “Truly” went to number one while the other two singles peaked inside the top five.

Richie’s sophomore effort was 1983’s Can’t Slow Down. The pinnacle of his career, Can’t Slow Down went on to sell more than 20 million copies. It was the third best-selling album of 1984 and it spent that entire year inside the Billboard Top 10. The critically acclaimed opus won the Grammy Award for Album of the Year in 1985. The album produced five singles—“All Night Long (All Night),” “Running with the Night,” “Hello,” “Stuck on You,” and “Penny Lover”—and all peaked inside the top ten on the Billboard Hot 100. “All Night Long (All Night)” and “Hello” both went to number one.

Richie’s next album, Dancing on the Ceiling, dropped in 1986. The work was well received and experienced brisk sales, but it didn’t come close to the success of Can’t Slow Down. The album would be Richie’s last new work until 1996. Between 1996 and 2012, Richie released seven albums, the best of which is 2012’s Tuskegee. For that opus, Richie re-recorded 13 of his greatest songs each with a country music artist. The album topped Billboard’s mainstream and country charts. It also earned a Platinum certification.

In 1988, Richie’s wife at the time, Brenda Harvey, caught him and Diana Alexander in a Beverly Hills hotel room. She pretended to be room service. Harvey assaulted both Richie and Alexander and was eventually arrested for trespassing, spousal abuse, and vandalism. Richie married Alexander in 1995 and then divorced her in 2004. 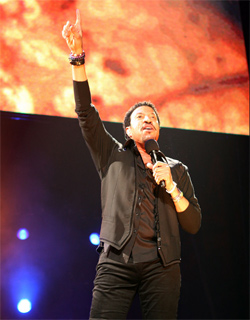