Booking your Lauryn Hill tickets here is easy and secure. Either choose the Lauryn Hill concert above to purchase them online, or call us at 1-866-837-0608.

You can search the times and dates in the tour schedule above to find the specific Lauryn Hill concert you want to attend.

Click on the red 'View Tickets' button to see all the available seats for that Lauryn Hill show, along with an interactive seating chart that will help you locate the best seats for your price.

You'll have to choose how many tickets you want to purchase for the Lauryn Hill concert tour, and then you'll be brought to our secure checkout.

Shipping/Delivery Information for Lauryn Hill Tickets:
You can choose either standard or express delivery and you can specify special delivery instructions if necessary. Your live music concert tickets will be shipped to you using Federal Express.

Also, some tickets to the Lauryn Hill tour may be available for immediate download as e-tickets, or electronic tickets, that you can print right from your device.

Lauryn Hill is a singer and rapper. Her live shows combine sensual neo-soul with raw emotion and artistry. Hill, who was born in the 1970s, still has the chops to sound great live. That includes her singing voice and her rapping flow. A Lauryn Hill concert is always about the “now.” A Lauryn Hill tour is never about nostalgia. So don’t attend one of her shows hoping to go back to her heyday of the late 1990s.

Hill can entertain with a full band or alone with her guitar. She’s one of the most versatile artists working in R&B/Hip Hop today. Fans with Lauryn Hill tickets will be treated to rousing renditions of “Adam Lives in Theory,” “To Zion,” “Oh Jerusalem,” and usually a Bob Marley cover or two. They’ll also get to brag that they saw a legend in concert.

Lauryn Hill is a singer, songwriter, and rapper who rose to national prominence as a member of The Fugees.

Hill released her debut solo album, The Miseducation of Lauryn Hill, in 1998. Nearly 20 years later, Hill has yet to release another solo effort.

What Are Lauryn Hill's Best Songs?

Lauryn Hill’s most successful single is 1998’s “Doo Wop (That Thing).” It went all the way to number one.

Hill’s other top 40 singles, as a solo artist, are “Ex-Factor” and “Everything Is Everything.” As a member of The Fugees she reached #29 with "Fu-Gee-La" and #2 covering "Killing Me Softly.”

When Is Lauryn Hill’s Birthday?

Lauryn Hill was born May 26, 1975. She came into this world in East Orange, New Jersey. Her father was a consultant and her mother was a teacher.

How many kids does Lauryn Hill have? Hill is the mother of six children. Five of those children, the five oldest, she had with Rohan Marley (Bob Marley’s son). The identity of the youngest child’s father has never been revealed.

Lauryn Hill, who has a vocal range of about three and half octaves, has an estimated worth of $2 million.

In 2012, Hill was charged with multiple counts of tax evasion for failing to give Uncle Sam his money. She owed the tax man more than $1.8 million. She served three months for the evasion in 2013. 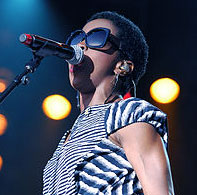