Booking your Kid Rock tickets here is easy and secure. Either choose the Kid Rock concert above to purchase them online, or call us at 1-866-837-0608.

You can search the times and dates in the tour schedule above to find the specific Kid Rock concert you want to attend.

Click on the red 'View Tickets' button to see all the available seats for that Kid Rock show, along with an interactive seating chart that will help you locate the best seats for your price.

You'll have to choose how many tickets you want to purchase for the Kid Rock concert tour, and then you'll be brought to our secure checkout.

Kid Rock ticket prices may be above or below face value and can fluctuate. You'll find cheap Kid Rock tickets here at relatively affordable prices.

Shipping/Delivery Information for Kid Rock Tickets:
You can choose either standard or express delivery and you can specify special delivery instructions if necessary. Your live music concert tickets will be shipped to you using Federal Express.

Also, some tickets to the Kid Rock tour may be available for immediate download as e-tickets, or electronic tickets, that you can print right from your device.

Though it took four albums to get him there, Detroit's own Kid Rock found his way to stardom. An unlikely, though not reluctant, celebrity, the rapping rocker born as Bob Ritchie fell into rap music and breakdancing at a young age.

The Beastie Boys were an early inspiration for the demos Kid started cranking out in 1988. 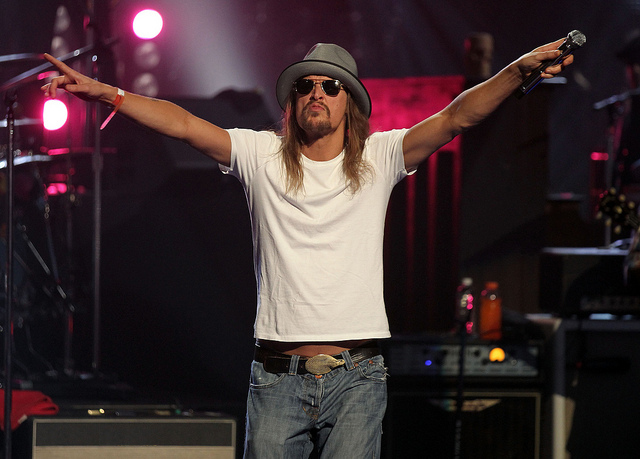 His tapes were good enough to get him a gig opening up a Boogie Down Productions show which led to a deal with Jive Records. Kid's debut album, Grits Sandwiches for Breakfast, dropped in 1990.

Though highly derivative of the Beasties' Licensed to Ill, the set didn't do much business. Not even a tour with Ice Cube and Too Short could make it work, and Kid Rock lost his deal.

Rock made a move to Brooklyn and Continuum Records. He also moved further into a hard rock sound, though not completely leaving behind the rap. The Polyfuze Method resulted in 1993 and met with mixed reviews.

That effort was followed by an EP, Fire It Up, in 1994, issued on Rock's Top Dog label via Continuum. Another move took him back to Detroit to make Early Mornin' Stoned Pimp for 1996. Though he was working with no budget to speak of, Kid Rock pulled together an honest-to-goodness backing band in Twisted Brown Trucker.

Thanks to the influx and success of rap-metal as a genre (with Korn, Rage Against the Machine, and Limp Bizkit leading the way), Kid Rock landed a new deal with Atlantic Records. When 1998's Devil Without a Cause was first issued, it didn't do much business.

Then, the promo gears started churning, MTV embraced the video for the album's second single, "Bawitdaba," and a star was born. All told, the album sold more than seven million copies.

Rock followed that up with a remix album of his earlier work in 2000's The History of Rock. That same year, Joe C. died from his various medical problems.

Though the media shone its light on his personal life, Kid Rock managed to focus on the task at hand which was making another record without Joe C. or Uncle Kracker who had embarked on a successful solo career.

What came out was Cocky led by the first track, “Forever,” which made inroads with rock radio. In 2003, an eponymous collection came and included a cover of "Feel Like Makin' Love" as the lead single.

A live album, Live Trucker, filled the gap in 2006 before Rock N Roll Jesus was issued in '07. It debuted at the top of the album chart.

For Born Free, Kid Rock's contribution to 2010, Rick Rubin was enlisted as producer and a number of guest artists made appearances including Sheryl Crow, Martina McBride, Zac Brown, Bob Seger, and T.I.

ClickitTicket offers concert tickets that are mailed right to your doorstep. We have the tickets you're looking for, and often at a cheaper price than other websites. We've got tickets to all the great rock concerts.