Booking your Keith Urban tickets here is easy and secure. Either choose the Keith Urban concert above to purchase them online, or call us at 1-866-837-0608.

You can search the times and dates in the tour schedule above to find the specific Keith Urban concert you want to attend.

Click on the red 'View Tickets' button to see all the available seats for that Keith Urban show, along with an interactive seating chart that will help you locate the best seats for your price.

You'll have to choose how many tickets you want to purchase for the Keith Urban concert tour, and then you'll be brought to our secure checkout.

Shipping/Delivery Information for Keith Urban Tickets:
You can choose either standard or express delivery and you can specify special delivery instructions if necessary. Your live music concert tickets will be shipped to you using Federal Express.

Also, some tickets to the Keith Urban tour may be available for immediate download as e-tickets, or electronic tickets, that you can print right from your device.

Keith Urban is one country music’s most successful singer-songwriters and one of music’s most talented guitar players. Despite being Australian, Urban’s music transcends the culture divide and reaches country music fans all over the world.

Urban released his debut American solo album in 1999. The self titled album went platinum in the United Stated and produced the number one hit, “But For The Grace of God.”

Urban’s next two albums, “Be Here” (2004) and “Love, Pain & The Whole Crazy Thing” (2006), both reached multi-platinum status and number one on the country music charts.

“Defying Gravity,” Urban’s sixth studio album, is set to be released on March 31st, 2009. Then in May, Urban will launch his “Escape Together World Tour” in Uncasville, Connecticut.

Several acts have been scheduled to open for Urban on his upcoming 58-city tour, most notably Taylor Swift, Dierks Bentley, Sugarland and Glen Campbell.

Urban was born in Whangarei, New Zealand and moved to Caboolture, Queensland, Australia when he was very young. He was introduced to American country music by his father.

Urban released a solo album in Australia in 1991. This country music album was very successful and charted four number one singles on the Australian charts.

The next year, Urban moved to Nashville, Tennessee and became a sought-after session musician. He recorded with country music dignitaries like Charlie Daniels, Garth Brooks, Dixie Chicks, and Brooks and Dunn.

In addition to his prowess on the acoustic and electric guitars, Urban can also play the ganjo (a banjo with a guitar neck), bass guitar, mandolin, piano, and bouzoui (a Greek mandolin).

In 1997, Urban formed the country band, The Ranch. The trio released one highly acclaimed album but disbanded the next year so Urban could pursue a solo career.

In his personal life, Urban is married to actress Nicole Kidman. The couple had their first child together in 2008.

Keith Urban's 2018 tour is called Graffiti U World Tour and we have tickets for sale. 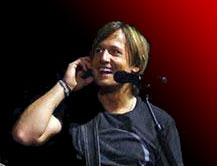