Booking your John Mayer tickets here is easy and secure. Either choose the John Mayer concert above to purchase them online, or call us at 1-866-837-0608.

You can search the times and dates in the tour schedule above to find the specific John Mayer concert you want to attend.

Click on the red 'View Tickets' button to see all the available seats for that John Mayer show, along with an interactive seating chart that will help you locate the best seats for your price.

You'll have to choose how many tickets you want to purchase for the John Mayer concert tour, and then you'll be brought to our secure checkout.

Shipping/Delivery Information for John Mayer Tickets:
You can choose either standard or express delivery and you can specify special delivery instructions if necessary. Your live music concert tickets will be shipped to you using Federal Express.

Also, some tickets to the John Mayer tour may be available for immediate download as e-tickets, or electronic tickets, that you can print right from your device.

John Mayer was born Oct. 16, 1977 in Bridgeport, Connecticut. After seeing Michael J. Fox play the guitar in the movie Back to The Future, 13-year old Mayer became infatuated with the instrument. His father rented a guitar and his neighbor gave him a Stevie Ray Vaughan cassette.

Within two years, and while still in high school, Mayer was a fixture of the local live music scene. Mayer bought his first real guitar with the money he earned while working at a gas station.

At 19, Mayer dropped out of the Berklee College of Music to play professionally with friend Clay Cook. The duo moved to Atlanta but quickly disbanded when Mayer drifted towards a pop aesthetic.

After an EP, containing songs co-written by Cook, and several solid performances at prominent music festivals, Mayer attracted the attention of a record label.

His full-length studio album debut was released in September of 2001. It originally dropped in June of that year on an independent label but that company was purchased by Columbia Records.

"Room For Squares" featured the hit songs "No Such Thing," "Your Body Is a Wonderland," and "Why Georgia." That was followed by Heavier Things (2003) which eventually rocketed to number one.

In 2006, John Mayer released Continuum, it was his third straight album released in the month of September. The album featured the hit "Waiting on the World to Change." In 2009, Mayer released Battle Studies which would become his second number one album. Incidentally, that offering came out in November.

Despite selling over 10 million albums worldwide and winning numerous Grammy Awards, Mayer has yet to post a number one single on the Billboard Hot 100. The highest chart position he's reached is number 12 thanks to 2007's "Say" from the Continuum reissue.

Mayer has also dabbled in other creative fields such as graphic design, writing, and stand-up comedy. He has a number of tattoos, including the initials SRV (Stevie Ray Vaughn) on his shoulder, and he collects shoes and watches.

Since becoming a superstar, Mayer has made headlines more for the women he dates than the music he makes. Mayer has been romantically linked to Jennifer Love Hewitt, Jessica Simpson, and Jennifer Aniston. 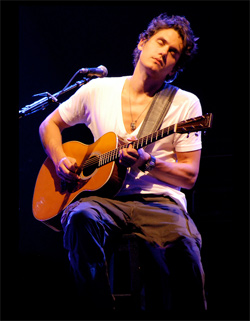