Booking your Joe Bonamassa tickets here is easy and secure. Either choose the Joe Bonamassa concert above to purchase them online, or call us at 1-866-837-0608.

You can search the times and dates in the tour schedule above to find the specific Joe Bonamassa concert you want to attend.

Click on the red 'View Tickets' button to see all the available seats for that Joe Bonamassa show, along with an interactive seating chart that will help you locate the best seats for your price.

You'll have to choose how many tickets you want to purchase for the Joe Bonamassa concert tour, and then you'll be brought to our secure checkout.

Shipping/Delivery Information for Joe Bonamassa Tickets:
You can choose either standard or express delivery and you can specify special delivery instructions if necessary. Your live music concert tickets will be shipped to you using Federal Express.

Also, some tickets to the Joe Bonamassa tour may be available for immediate download as e-tickets, or electronic tickets, that you can print right from your device.

At a Joe Bonamassa concert you’re going to hear a solo or two… or twenty. There’s just no way around it. Yet, those solos, most of which are supplied by “Smokin’ Joe” and his guitar, are of the virtuoso blues variety. They are one of main reasons for purchasing Joe Bonamassa tickets.

Joe Bonamassa is a legendary blues man. Attending a Joe Bonamassa tour stop is a master class in the blues and how to play the guitar. One of our favorite techniques is when Bonamassa turns down the volume of his axe, strums a note, and then slowly turns up the volume. It’s like the note comes out of nowhere! It’s just one of the many things Bonamassa does in concert that will blow your mind.

Joe Bonamassa is a blues guitarist, singer, and songwriter. He has jammed with a number of big name musicians including Eric Clapton, Buddy Guy, Steve Winwood, and Derek Trucks. He has also collaborated with singer Beth Hart.

He started playing the guitar at age four. He was in a band when he was 12 and opened for B.B. King when he was just 18.

Which Joe Bonamassa Album Is The Best?

Joe Bonamassa’s debut opus popped in October of 2000. It’s one of his strongest releases.

The artist’s next four albums were solid but generally not considered her best. Staring with Sloe Gin in 2007, the guitarist improved his songwriting prowess which meant he improved his studio albums.

What Band Was Joe Bonamassa In?

When he was 12 years old, the guitarist fronted his own band called Smokin' Joe Bonamassa. Other groups that have called him a member include Bloodline, Black Country Communion, and Rock Candy Funk Party.

What Guitar Does Joe Bonamassa Play?

It’s hard to say, from day to day, from concert to concert, what guitar Joe Bonamassa plays. After all, he has 300 of them.

We can name his favorite guitar though. That’s his 1959 Les Paul Sunburst.

The blues man doesn’t sing the blues when he goes to the bank. Joe Bonamassa’s net worth is figured to be around $20 million. 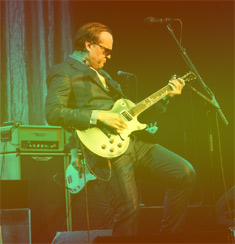